The Welsh Government has defended a big increase in subsidy for the North-South Wales air service while it cuts funding for lifeline bus services. From 2010-11 to 2012-13, subsidy for the flights between Anglesey and Cardiff increased by 37.2%. Subsidy was £184 for each passenger who used the service in 2012-13. Over the same 2-year period, the Welsh government reduced its grant to councils for unprofitable bus services by 29.2%. At least 94 bus routes have been withdrawn since 2011. Other services are under review because subsidy per passenger exceeds £2 or £3. The Welsh Government has been reviewing bus funding since early 2012 – but has not evaluated the air service’s costs and benefits since the global financial problems and major reductions in public-sector budgets. The route from Cardiff to Anglesey has 2 flights each way, each weekday, and there were almost 15,000 passenger journeys in 2008-09, but only 8,406 passenger journeys in 2012-13. Subsidy for the air operator and the civilian air terminal at RAF Valley on Anglesey increased from £1.08m in 2008-09 to £1.55m in 2012-13.
.
Tweet

The Welsh Government has defended a big increase in subsidy for the North-South Wales air service while it cuts funding for lifeline bus services.

Over the same two-year period, the Labour government in Cardiff Bay reduced its grant to councils for unprofitable bus services by 29.2%.

A recent BBC investigation revealed that Welsh councils have withdrawn at least 94 bus routes since 2011.

Other services are under review because subsidy per passenger exceeds £2 or £3.

The Welsh Government has been reviewing bus funding since early 2012 – but has not evaluated the air service’s costs and benefits since the global financial crash and major reductions in public-sector budgets.

The air service’s figures can be studied because a National Assembly committee asked the Wales Audit Office to investigate. Similar analysis of the subsidised first-class rail facility between Holyhead and Cardiff is impossible, because the government has declined to disclose how many passengers used it last year.

The air service, linking Cardiff airport to RAF Valley (on Angelsey) twice each way per working weekday, was launched in 2007. It carried almost 15,000 passenger journeys in 2008-09, and an appraisal in 2008 concluded that the service had a positive impact on many sectors of the Welsh economy.

Despite these significant changes, no cost-benefit analysis has been undertaken since 2008.

Conservative AM Mark Isherwood, who represents North Wales, said: “It seems that once again the Welsh Government has been caught with its corporate-governance pants down. They invested public money without putting controls in place.”

North Wales Liberal Democrat AM Aled Roberts contrasted the detailed evaluation of bus services by councils with the Welsh Government’s policy of increasing air subsidy without assessing value for money.

“If the [air] service has always been heavily reliant on people from the public sector to make use of it, clearly the financial constraints on the public sector suggest that there isn’t going to be as much usage going forward,” he said.

The Welsh Government says passenger numbers have been increasing, with 8,536 passenger journeys carried in the 2013 calendar year.

Asked why it had reduced subsidy for buses while increasing air subsidy, a Welsh Government spokesman said: “We are committed to delivering a range of public transport to support the social and economic needs of Wales.

“A full appraisal of the North-South air service is already underway. We are looking for innovative solutions to deliver an efficient, sustainable bus service across Wales and have established a new Bus Advisory Group to review policies and look at new approaches to funding. Local authorities are responsible for determining how they spend the funding we provide and identify which services should be supported and at what level.”

Mr Isherwood said bus services were being cut despite all parties in the Assembly agreeing that they provided an important service, especially in rural and deprived areas. Arriva had told him recently it would take on some threatened bus routes.

Taxpayer has paid some £86 in subsidy for every one of the 65,073 passengers who used Cardiff-Anglesey service between May 2007 April 2013.   Passenger numbers on a publicly-subsidised air route between Cardiff and Anglesey have fallen 35% since it was first introduced in 2007.  Load factor now on Cardiff-Anglesey planes now at about 46%-47%.

The north-south service – dubbed “Ieuan Air” after then-Deputy First Minister and Ynys Mon AM Ieuan Wyn Jones – has cost the taxpayer around £86 in subsidy for every one of the 65,073 passengers which used the service between May 2007 and April 2013, the Wales Audit Office (WAO) said in written evidence to the National Assembly’s Public Accounts Committee (PAC) yesterday.

The WAO also said the government should “revisit” the business case for the service and undertake a “full options appraisal and cost-benefit analysis”, which includes alternative investments to the service.

Questioning Welsh Government officials, chair of the committee Darren Millar said passenger numbers using the service had “plummeted”, with planes now running at an average “load” of less than half, at around 46%-47%.

Director General of the Business, Enterprise, Technology and Science department James Price said passenger numbers were down 35% on “the highs of when it was first introduced”.

But he insisted the Welsh Government did believe the service delivered value-for-money.

He said: “Passenger numbers are down by about 35% on the highs when they were introduced.

He also said the operator, Citywing, had reported it was “positive” a passenger numbers were “picking up significantly” recently.

He said he “couldn’t second-guess” whether ministers would renew the service when the contract expires, but he said the department would consider options to expand the service to include flights to Hawarden, Flintshire, during a “seven-hour downtime” after planes arrive in Cardiff.

Auditor General for Wales Huw Vaughan Thomas also said in a briefing to AMs: “During the first two years of the Highland Airways contract – May 2007 to April 2009 – nearly 29,000 passengers used the service with an average reported load factor of 82%. This load factor performance compared favourably with an industry average load factor over the same period of around 76%.

The north-south air link between Anglesey and Cardiff is to continue for the next four years. But with the assembly government subsidy for the service rising by 50%, opposition parties have condemned the decision. Tomos Dafydd reports.

The air service linking north and south Wales will continue for another four years as its annual assembly government subsidy rises from £800,000 to £1.2m.

The current operator Manx2.com has secured the Cardiff-Anglesey contract along with its partner FLM Aviation.

But Liberal Democrats say it is an “environmental and financial outrage”.

“This air link joining north and south Wales has proved itself to be an efficient, reliable and popular service,” said Mr Jones.

“This service is well used, it is well utilised, and it’s a wide range of people – there are business people, people visiting friends and families, people going for tourism opportunities, as well as of course as people from the public sector.

“I think it is justified, simply because we need to maintain good communications between north and south of our country.”

Clive McGregor, leader of Anglesey council, welcomed the subsidy, saying it was “good news and brings us certainty for another four years”.

He added that Manx2’s record has been “excellent so far”.

“The hope is that together we can develop the service from Maes Awyr Môn and that destinations such as Dublin and the Isle of Man will be offered in the future,” Mr McGregor said.

Isle of Man-based Manx2.com took over running of the route in May after the airline Highland Airways went into administration in March.

It was awarded the new contract after the assembly government out the service out to tender in July.

Manx2.com chairman Noel Hayes said: “As a Celtic neighbour, Manx2.com is delighted to have been chosen to continue the connection between Cardiff and Anglesey.

“With our home base just 50 miles away across the Irish Sea, we’re excited about continuing our award-winning Manx service into the future.”

The decision was criticised by Welsh Liberal Democrats, who have long opposed the service, which has been dubbed “Ieuan Air” by some after the Anglesey AM and Plaid Cymru leader.

The party’s transport spokesperson, Jenny Randerson said: “At a time when families and business are cutting back, it beggars belief that the Labour-Plaid government can waste another £4.8m of taxpayers’ money subsidising the Ieuan Air airlink.

“It is an environmental and financial outrage.”

The party said it was “simply scandalous” that the new deal also tied in any future assembly government to the service for the next four years.

“The Welsh Liberal Democrats will now look to see what can be done to ensure a future government is free to scrap this wasteful and polluting subsidy,” added Ms Randerson.

However, the assembly government has defended the increase in subsidy for the service, which jumps by 50% to £1.2m a year.

A spokesperson said it reflected changes since the first north-south airlink agreement in 2007.

“Since then the costs of operating the service has increased, for example increases in fuel, salary costs, landing charges, etc, the current budget limit reflects these increased costs,” added the spokesperson. 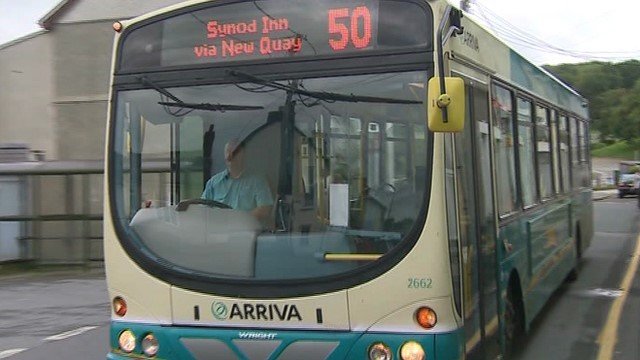 Nearly 100 subsidised bus routes have been scrapped by councils in Wales in the past three years, with further cuts expected as authorities make savings.

The figures obtained by BBC Wales reveal that nearly one in seven routes across 19 council areas have been axed.

The charity Age Cymru warned of the impact this could have on older people saying they could become increasingly isolated and cut off from services.

The Welsh government said it was reviewing ways of funding services.

But a spokesperson also added that decisions on support for local service remained with councils.

Responses to a Freedom of Information request show 93 services have been cut from 656 subsidised routes between 2011 and 2014.

The Welsh Economy Minister, Edwina Hart, has said that Cardiff Airport – now in public ownership – is likely to return to profit eventually, but not in the short term. She said its downward spiral is no longer continuing. The airport finally becoming profitable is a “long-term” strategy. She was giving evidence to the National Assembly’s Enterprise and Business Committee on the airport, which was bought by the Welsh Government for £52m at the end of 2012. Ms Hart suggested there wouldn’t be a quick sale of the airport back into the private sector, which the Scottish Government is seeking for the newly-nationalised Prestwick Airport in Ayrshire. Pressed by the Plaid Cymru economy spokesman on when the government expected the taxpayer to recoup its investment. She said the Budget announcement for support for regional airports to set up new routes would apply to Wales and that they would “wait for the detail of it”, but confirmed the Welsh Government is likely to bid in for funding. Chancellor George Osborne announced a £20m annual fund will be used to encourage new routes from regional hubs like Cardiff.