Heathrow airport passes 70m passenger per year milestone – its most ever

Due to a surge of passengers going away for Easter, Heathrow has had its highest ever number of passengers in the rolling year.  This March, its passengers were up 6.9% above March 2011.  (BAA’s passengers overall were up 4% above March 2011).  This has been achieved partly by getting planes fuller (load factor) and by larger planes with more passengers. Some of the traffic has come from Stansted.  Emirates and Singapore Airlines are using more of the largest planes, the A380, in order to get more passengers using each take off and landing slot. Singaport Airlines now operates 2 A380s per day to Heathrow, and will increase that to 3 in June – increasing capacity by 17%. 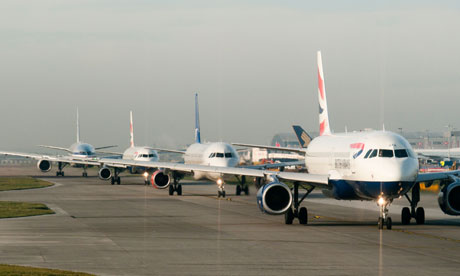 Britain’s biggest airport has hit a new milestone with more than 70 million passengers filing through in the space of 12 months – althoughHeathrow‘s owner admits the increase in its record-breaking year is largely down to Easter.

While BAA has pointed to fuller planes and the airport’s “resilience”, the variation in the Christian calendar means that the Easter bulge in traffic has occurred twice in the last 12 months, this March and in April 2011.

The Easter factor generated almost 7% more passengers in March 2012 compared with the previous year, with 5.7 million people passing through Heathrow’s terminals last month. The load factor, or proportion of plane seats filled by passengers, was also up by 4.2% for the month, which BAA says continues an upward trend.

However, Heathrow rise underlines Stansted’s ongoing decline, with traffic down 4.7% from the previous year.

Matthews again attacked the “constraints” that BAA claims is hurting it and the British economy – an argument that appears to have been gaining traction in government recently, with George Osborne and others pledging to re-examine airport capacity in the south-east. He said: “Heathrow continues to operate at 99.2% capacity – placing constraints on airlines’ ability to introduce new flights to the emerging economies which are so vital to UK economic growth.”

BAA claims rival hub airports on the continent are pulling away. Its mood will not be helped by Air France-KLM, which on Wednesday started operating flights to Wuhan, the merged airlines’ ninth Chinese destination, from its French hub.

Air France-KLM’s Heathrow-based UK general manager, Henri Hourcade, said the carriers’ respective homes, Schiphol and Charles de Gaulle airports, which offer connecting flights to over a dozen British cities, had “infrastructure that is not saturated, and we can go with the demand for emerging markets.” He added, in a pointed reference to the number of internal domestic flights offered in Britain: “And passengers are not forced by car to come to Heathrow – the strategy of one other carrier whose name I will not mention.”

At BAA’s other airports, Glasgow recorded a 4.6% increase while Aberdeen grew 10.2%, a rise ascribed to domestic oil-industry-related traffic. Edinburgh and Southampton were down 2.8% and 1.7% respectively, driven by reductions in domestic traffic.

Emirates has suggested using “quieter” superjumbos during the night to increase capacity at Heathrow.

The Dubai-based airline told the Financial Times that it could use Airbus A380s during parts of the nightly curfew with the aircraft adopting a steeper–than-normal descent which Emirates said would reduce noise levels affecting people living near Heathrow.

Currently Heathrow is restricted in the number of flights that can use the airport between 11.30pm and 6pm. For the summer season between the end of March and late October, the airport is only allowed 3,250 total movements which works out at around 15 flights per night.

Emirates’ plan is likely to be considered as part of the government’s review of aviation policy which is due to start its initial consultation process in the summer – having been delayed from its originally planned release of March. All options for expansion in the south-east are being considered apart from a third runway at Heathrow.

The current noise regulations for Heathrow, Gatwick and Stansted, which have been in place since 2006, were due to run out in October but have now been extended for another two years to October 2014.

The Department for Transport said this decision was made so that the issue of noise could be included in the government’s overall aviation strategy review.

Aviation minister Theresa Villiers said in a statement: “As a first step to replace the current regime in 2014, we will launch a first-stage consultation later this year which will seek detailed evidence of the effectiveness of the current regime including costs and benefits and airlines’ fleet replacement plans.

“This will be followed by a second consultation next year which will enable us to take account of adopted policy when developing our specific proposals.”

The government plans to publish its final aviation policy framework in spring 2013 which will include its new night noise policy with the final decision announced a year later in preparation for implementation from October 2014.

Gatwick and Stansted are allowed a higher number of night flights than Heathrow under the current restrictions. Gatwick is limited to 11,200 movements for summer 2012 which equates to around 50 flights a night while Stansted is restricted to 7,000 movements (about 32 flights per night).

Singapore Airlines to operate all A380 flights from Heathrow

Singapore Airlines has announced it will deploy an Airbus A380 superjumbo on all three daily London flights starting from June 1.

Currently, two of the three services are operated by the A380 while the other is served by a Boeing B777-300ER. The switch will add 17% more capacity per day to the route just ahead of the London Olympics.

The A380 has become the carrier’s only “jumbo” aircraft in its fleet after having retired its last Boeing 747 yesterday.

Heathrow was Singapore Airlines’ first destination in Europe to receive the superjumbo in March 2008 with a second A380 to start on the route six months later.

Singapore currently has 16 A380s in its fleet with another three on firm order and options on a further six aircraft.

8.6m passengers travelled through BAA’s airports in March, a rise of 4.0% on the previous year. This increase was helped by Easter being earlier this year, with a substantial proportion of pre-Easter traffic falling in March rather than in April last year.

Heathrow saw 5.7m passengers pass through its terminals, a rise of 6.9% on March 2011. That increase means Heathrow saw more than 70m passengers over a twelve month period for the first time. It passed the 60m mark in 1998.

Heathrow’s performance was particularly notable for the 4.2 percentage point increase in load factors, to 73.4% compared to March last year. This continues an upward trend over the course of the past year and was also helped by the earlier Easter.

Year on year, cargo at Heathrow was virtually identical, and up slightly at 0.1% across the group.

In Scotland, Glasgow recorded a 4.6% increase while Aberdeen maintained its recent impressive growth, achieving a double digit increase of 10.2% which reflected the rise in domestic oil related traffic. Stansted, Edinburgh and Southampton were down 4.7%, 2.8% and 1.7% respectively, with reductions in domestic traffic being one of the key drivers of the declines at Edinburgh and Southampton.

North Atlantic traffic was up 13.6% with other long haul traffic up 5.2%. The group’s biggest market, European scheduled traffic, was up 3.2%. European Charter traffic had strong results across individual airports due to the strong ski season in Europe.

Traffic from Heathrow to the BRIC countries saw growth compared with March last year, with an increase of 62.3% in traffic to and from Brazil.

“Reaching 70m passengers at Heathrow is a major milestone, demonstrating the resilience of the airport in an otherwise challenging economic environment. Increases in load factors drove this; however Heathrow continues to operate at 99.2% capacity – placing constraints on airlines’ ability to introduce new flights to the emerging economies which are so vital to UK economic growth.”