Nantes airport protest at the Eiffel Tower, complete with sheep and tractor

Over the weekend, the very active and energetic protest group against a new airport at Notre Dame des Landes, near Nantes, took their protest to Paris. This coincides with an environmental conference taking place in Paris, but which will not discuss the airport issue. The protesters managed to quickly get a tractor close to the Eiffel Tower, the main symbolic image of Paris, and erect a pen for some sheep they had brought with them, which they grazed on the grass around the tower in the Champ-de-Mars.  All this was watched with great interest by bemused tourists, who took loads of photos, as seeing sheep, tractor and protesters under the Eiffel Tower is not something one expects to see every day. The protest is against President Hollande’s support for building the airport, and his refusal to meet them. The protest continued over night.

From ACIPA
The original French is at
http://parolesdecampagne.blogspot.co.uk/2012/09/lodyssee-parisiennepremier-jour.html
16.9.2012
Below is a very poor translation of the French (blame Google translate) but you can get an impression ….)
The opening of the conference with the omission of Environmental sensitive subjects (Notre Dame des Landes and shale gas) could leave us without reaction. Because a show was scheduled to come to the palace Jena on September 14, just to remind the President Holland Project Notre Dame and request meetings; further action was needed and unexpected as evidence. And we’re off Thursday morning with tractor and sheep in Paris.

Facing the impressive safe deployment deployed around the palace Jena, we chose a symbolic place: the Eiffel Tower and Champ de Mars.

Wink at Larzac course that would have led TV journalists seeking an original approach to the Conference to visit us. The only TV to meet us was “free TV” whose journalists have a long story and seemed very interested in the subject. We also had radio (France Inter, RTL) and some journalists Presse (AFP newspaper).
Draw attention  to put Notre Dame des Landes in the order of environmental issues, such was our ambition.  Noticed, we were!
Installation commando operation carried out in minutes: tractor landed (it only remained to decorate), dropped in sheep nimbly mounted enclosure. All this under the eye rather amused and amazed passersby, tourists nimbly unsheathed their camera and photographing everything goes: sheep and a tractor in front of the Eiffel Tower, it does not see every day!
Different services are rapidly authorities. First men in charge of the green lawn: “You must remove the sheep lawn is at rest! And your pegs? You must have damaged the sprinkler heads buried in the grass … “.
Then the men in blue safety of Paris and those of the police. All course want to speak to a manager who is found since we are all responsible! Then we overhear telephone conversations between surrealist employees and their chefs: “OK, we seek the license plate of the tractor! “Dominique hastened immediately to cover it with a sheet triangle not at the airport. Fortunately, there are the remains of an old plate cut in two occupying the overzealous police not (that one should find us friendly). “Yes, (leader), we verbalize sheep. But then the batch or individually?“. As soon as he hung up, the employee says, “I do not see a plate, I take it into my head that photo for me alone.The police are there … It does look as … “. Disagreements between men in blue we serve.
Of telephone negotiations … We undertake thirty: is it enough to resist and stay? Our strength is to be under the eye of tourists whose passage is incessant. This is what keeps us moving surely forcibly. The monitoring device is lighter: we now unmarked car with officials of the Directorate of Public Order and Traffic monitor us. Therefore, we take every opportunity arise:

–         the arrival of a married couple we photograph the tractor

–         a parade of two horses who park in front of us a long time waiting for the people that drivers should take the restaurant. The tractor is then inserted in the procession and will even several times around the place to start cars.

–         The same operation is extended with scooters but they are fast and let go fast enough Dominique … Whatever, it is still the opportunity to ride and even go strolling through the aisles … 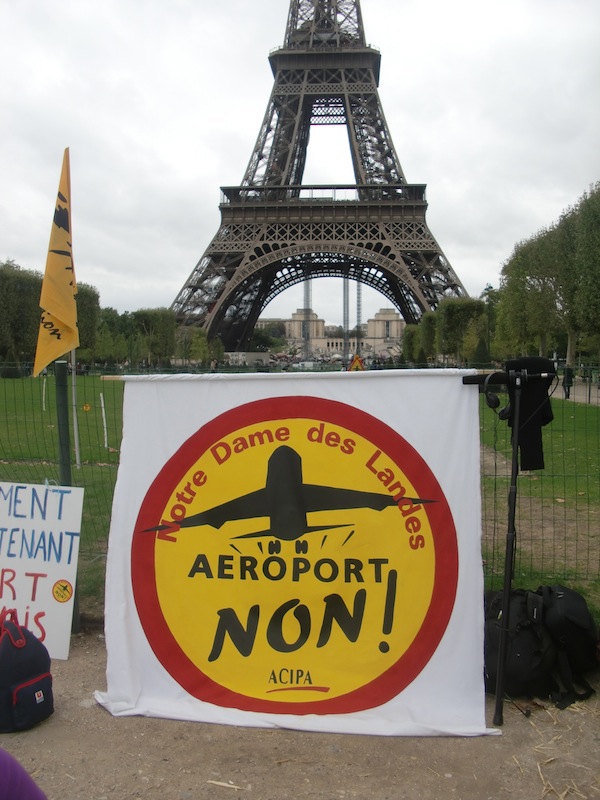 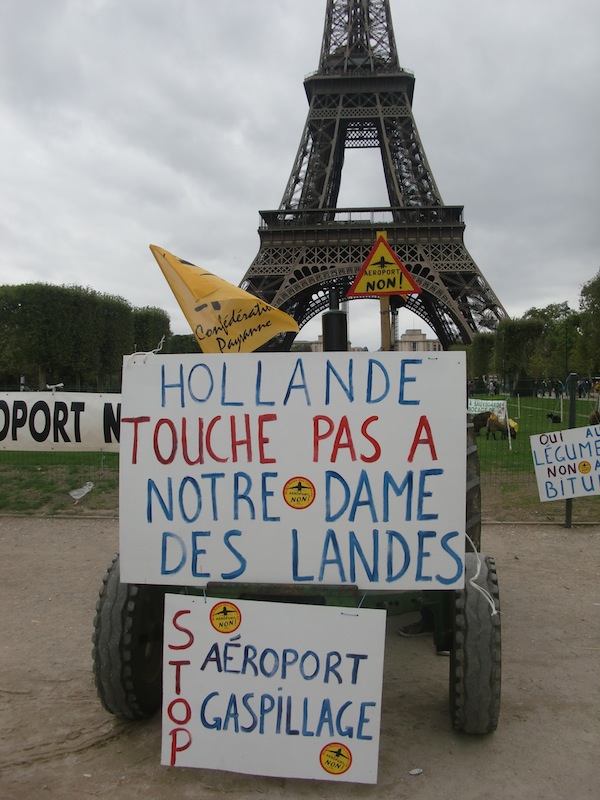 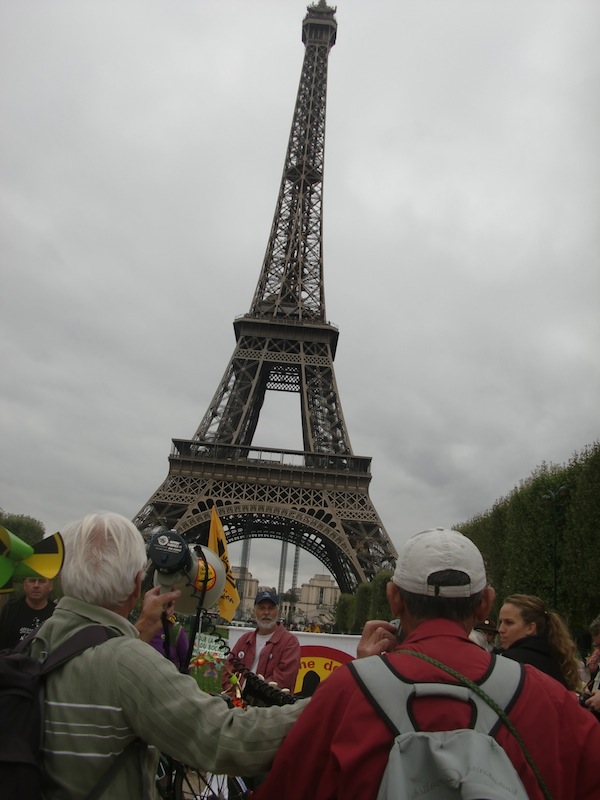 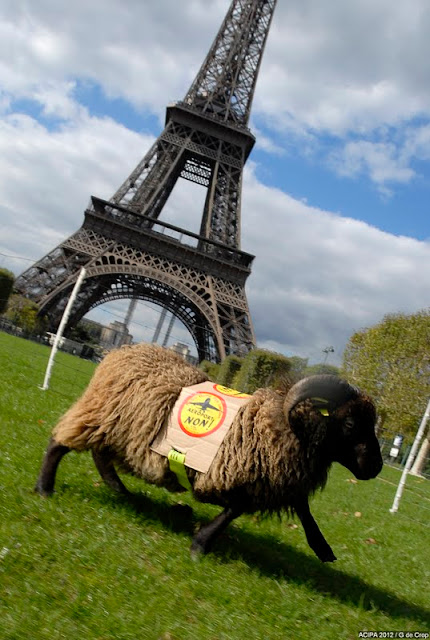 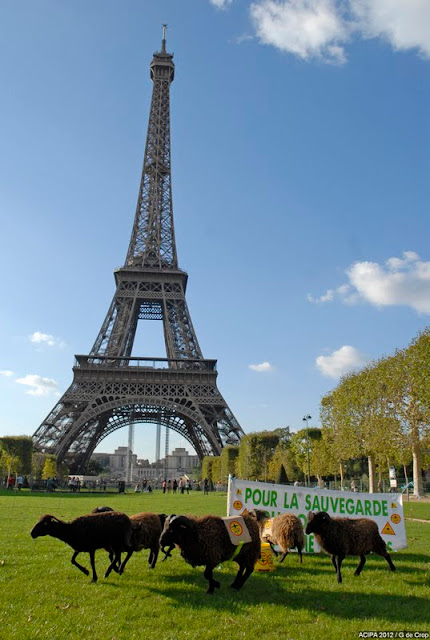 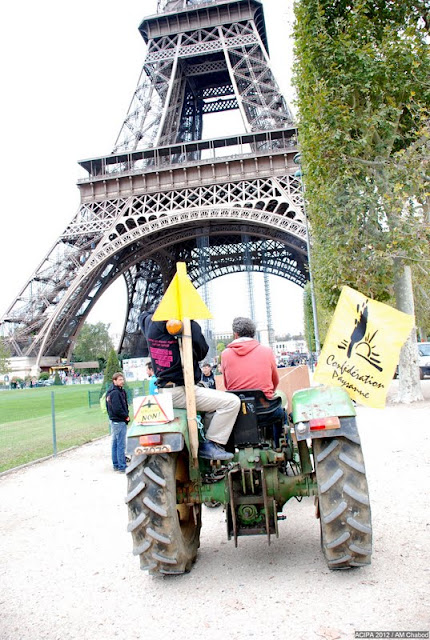 Opponents of airport Notre-Dame-des-Landes settle the Champ-de-Mars in Paris. 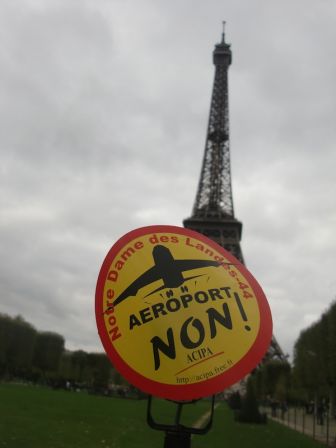 A group of 25 opposition to the proposed airport at Notre-Dame-des-Landes arrived in Paris today , 30 to 15 h. Parties Notre-Dame-des-Landes with a tractor and sheep, they moved to the Champ-de-Mars. These opponents criticize the environmental conference on 14 and 15 September “censor taboo subjects, including the draft Notre-Dame-des-Landes.” They also intend to “denounce the financial abyss that is this project, so that the economic crisis is the fiscal restraint that should be imposed, and condemn the decision to build an airport in destroying farmland, rather than develop the existing if needed. “

This Friday, another group of fifty people should join the marathon energy sobriety, place d’Iena, 9 am 30.

Tractors on the Champs Elysees! Sheep grazing beneath the Eiffel Tower!  Great protest in Paris by the campaigners against the new airport in Nantes against the support of the Hollande Government for the proposed new airport.