DECC estimates of future oil prices. Low, central and high – out to 2030

The price of oil has varied a great deal during the past year. The price of jet fuel went up at the start of 2012 and has now come back to approximately where it was a year ago. There is speculation that the price of oil may go up, and also speculation that due to the global dip in demand, anticipated over several years, that its price may go down for five years or so.  The new oil in the USA from tar sands is described as a “game changer” and in addition, efforts to cut energy consumption may be having some small effect. DECC, the Dept of Energy and Climate Change, produce each October a range of forecasts for the prices of fossil fuels up to 2030, with high, central and low estimates. The figures for each band in the 2012 estimates are a little higher than those produced in 2011. Figures below. For 2020 their estimates are $93, 123 or 150 per barrel of oil, for low, central and high. And for 2030 their estimates are $80, 135, and 190.


IATA figures on the price of jet fuel over the past six months:

Some think the price will fall:

Oil prices could come down over the next five years due to sluggish economic growth around the world and rising oil production in Iraq and North America, the International Energy Agency predicts.

The organisation, which advises most major governments on energy policy, expects the average import price of oil to fall from $107 a barrel this year to $89 in 2017. Problems in the eurozone had dampened expectations for economic growth, it said. “Even China, the main engine of demand growth in the last decade, is showing signs of slowing down,” it noted.

Demand will also drop on the back of improvements in energy efficiency, changes in consumer behaviour, and a move away from fossil fuels…….. and it continues ….. at http://www.guardian.co.uk/business/2012/oct/12/oil-prices-set-fall-iea

…………and there is much more from Reuters

The world could see a gradual easing of oil prices over the next five years due to sluggish economic growth and rising energy efficiency and as production increases steeply in Iraq and North America, the West’s energy watchdog said on Friday.

The International Energy Agency, which advises industrialised nations on energy policy, cut its global oil demand growth projection for 2011-2016 by 500,000 barrels per day (bpd) compared to its previous report in December 2011.

As a result, the pressure on OPEC to produce more oil will ease dramatically and the cartel will have to cut production to no more than 31 million bpd until 2017 to balance global demand. It has been producing between 31 and 32 million bpd this year.

“Expectations of economic growth through the forecast period have been reduced amid persistent OECD debt concerns, especially in the euro zone. Even China, the main engine of demand growth in the last decade, is showing signs of slowing down,” the IEA said in its Medium-Term Oil Market Report. “Readings suggest a gradual easing of prices over the forecast period.”

In its previous report in December 2011, the IEA said it expected global oil demand to rise by around 8% between 2010 and 2016 but said it saw markets becoming less tight than in previous years.

Ten months later, it paints an even more comfortable picture, saying oil demand will rise by less than 7% between this year and 2017, when it will reach 95.7 million bpd.

Last year, the IEA said U.S. production of light tight oil from shale formations was “a game-changer in the making”. This year it says the impact of the new oil streams is increasing.

Global production capacity is expected to increase by 9.3 million bpd by 2017 to 102 million bpd, effectively exceeding demand by over 6%.

“Around 20% of liquids growth comes from Iraqi capacity and 40 % from North American oil sands or light tight oil production,” the IEA said.

Others think the price will rise:

Price of oil could double in a decade, warns IMF paper

A working paper commissioned by the IMF says previous trends in oil prices point to a major surge in costs by 2022.

THE PRICE OF OIL could permanently rise to around double its current level in the next decade, a working paper commissioned by the IMF has warned.

The ‘Future of Oil’ paper, which claims not to represent the views of the IMF but which nonetheless lists the IMF’s staff economists among its writers, says increasing demand will clash with tightening supply to force prices up.

“Our prediction of small further increases in world oil production comes at the expense of a near doubling, permanently, of real oil prices over the coming decade,” the paper warns.

“This is uncharted territory for the world economy, which has never experienced such prices for more than a few months.” 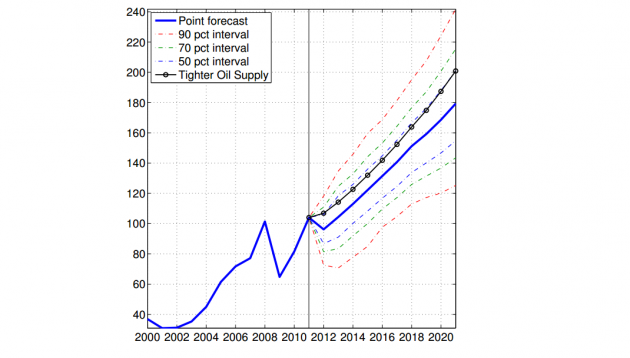 A graph showing the projections of how the price of oil could rise over the next decade. Image: IMF

The paper suggests that a major technological revolution would be required to avert the spike in prices, as demand for oil is relatively inelastic – meaning that rising prices do not necessarily has quite as big an impact as one might suggest.

The paper notes how there is only a “finite limit to the extent that machines (and labour) can substitute” one form of energy for another, meaning that an increase in prices – perhaps to a point where some industries simply could not afford oil – could pose massive challenges.

“Our empirical results also indicate that if the model’s predictions continue to be accurate as they have been over the last decade… the future will not be easy.”

It further notes that a shock to oil supplies could have an impact on global economic output, noting varying estimates that energy accounts for between 3.5 per cent and 50 per cent of overall GDP levels.

“It is clear that if this [upper estimate] can be conﬁrmed in further rigorous econometric studies, the implications of lower oil output growth for GDP could be very large,” it states.

The IMF Working Paper is at http://www.imf.org/external/pubs/ft/wp/2012/wp12109.pdf the conclusion of which states:

The main objective of this paper has been to propose and to empirically evaluate a model
of the world oil market that does not take an a-priori view of the relative importance of
binding resource constraints versus the price mechanism for world oil supply. We do not
want to rule out either of these mechanisms, because the recent data tell a convincing
story that both must have been important. Our empirical representation of this view
models oil supply as a combination of the Hubbert linearization specification of Deffeyes
(2005) and a price mechanism whereby higher oil prices increase oil output.

Our empirical results vindicate this choice. Our model performs far better than competing
models in predicting either oil production or oil prices out of sample, in a field where
predictability has historically been low. Our empirical results also indicate that, if the
model’s predictions continue to be as accurate as they have been over the last decade, the future will not be easy.

While our model is not as pessimistic as the pure geological view, which typically holds that binding resource constraints will lead world oil production onto an inexorable downward trend in the very near future, our prediction of small further increases in world oil production comes at the expense of a near doubling, permanently, of real oil prices over the coming decade. This is uncharted territory for the world economy, which has never experienced such prices for more than a few months.

Our current model of the effect of such prices on GDP is based on historical data, and indicates perceptible but small and transitory output effects. But we suspect that there must be a pain barrier, a level of oil prices above which the effects on GDP becomes nonlinear, convex.

In that case the macroeconomic effects of binding resource constraints could be much larger, more persistent, and they would extend well beyond the oil sector. Studying these issues further will be a priority of our future research.

DECC’s range of oil price forecasts – in October 2011 at  http://www.decc.gov.uk/assets/decc/11/about-us/economics-social-research/2934-decc-oil-price-projections.pdf

DECC’s range of oil price forecasts in October 2012 at  http://www.decc.gov.uk/assets/decc/11/about-us/economics-social-research/6658-decc-fossil-fuel-price-projections.pdf