Rochester & Stroud MP Mark Reckless has organised a ballot for people on the Hoo Peninsula about a Thames Estuary airport. The area to be canvassed has now been  extended across the constituency.  Another 30,000 papers have been ordered, with getting them distributed by volunteers being a logistic challenge. So far more than 10,000 ballot papers have been delivered, of which around 3,700 have been returned. Mark Reckless says there has been an “overwhelming response” and that 95% of those returning ballot papers have been against an airport. The peninsula has a population of more than 20,000 and includes villages like Cliffe and Grain, which have both been suggested as possible sites for an airport. The ballot has been criticised by the Labour party, who have long campaigned for a referendum across Medway on the issue. This would be held on a specific day, with voters going to polling stations to cast their vote. Unfortunately however, Mark Reckless is keen to see either Gatwick or Stansted airports expanded instead.
. 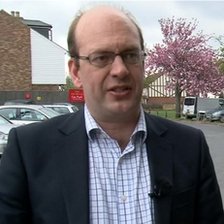 Mark Reckless said it would be easier to expand existing airports
A Kent MP is considering extending his campaign against plans for a new airport in the Thames Estuary following an “overwhelming response”.

Mark Reckless, Tory MP for Rochester and Strood, has been canvassing opinion on the Hoo Peninsula, but said he might expand it to all of his constituency.

He has been sending out ballot papers, and said over 95% of residents who had responded so far opposed the plans.

Tory Mayor of London, Boris Johnson, is among the supporters of a new airport.

There have been three different plans to build airports in the Thames Estuary including a floating airport designed by architects Gensier.

Another plan is known as Boris Island after it was backed by Mr Johnson, and there are proposals for a hub airport on the Isle of Grain designed by architect Norman Foster.

“Estimates of the cost of building a new airport in the Thames Estuary range from £70-£100bn, which could add £50 to the cost of every plane ticket sold.

Mr Reckless maintains that it would be easier to expand existing airports, rather than “build a massive new one at huge expense”.

A commission chaired by ex-Financial Services Authority boss Sir Howard Davies is to consider a number of options to expand capacity in the South East and report back in 2015.

The Thames Estuary airport ballot will be extended to cover Rochester and Strood.

Conservative activists funded a poll for residents living on the Hoo Peninsula earlier this year, in a move led by MP Mark Reckless, whose constituency covers the area.

The peninsula has a population of more than 20,000 and includes villages like Cliffe and Grain, which have both been suggested as possible sites for an airport.

The idea of a Thames Estuary airport first began to resurface when Boris Johnson was elected Mayor of London five years ago.

Since then Mr Johnson has been relentlessly pushing the idea, and numerous architectural firms have picked up the gauntlet laid down by him and come forward with plans.

The government has set up a commission to solve the thorny issue.

Headed by economist Sir Howard Davies, it is due to issue an interim report at the end of this year which will narrow down the options.

A final report is due after the next election in 2015.

So far more than 10,000 ballot papers have been delivered, of which around 3,700 have been returned.

More than 95% of respondents have said they don’t want an airport.

Cllr Chris Irvine (Con), who represents the peninsula and works in the office of Mr Reckless, confirmed to the Medway Messenger people living in the rest of the constituency would now be able to have their say.

He said: “We’ve placed the order for 30,000 extra ballots; it’s the logistics now – getting the ballots delivered to the rest of the constituency.”

Volunteers hope to deliver the ballots towards the end of this month.

Mr Reckless said he had been “overwhelmed” by the response.

He said: “Local councillors, activists and residents have been working their socks off to get the ballot paper to every household on the Hoo Peninsula and the interim result speaks for itself.”

The ballot has been criticised by the Labour party, who have long campaigned for a referendum across Medway on the issue.

This would be held on a specific day, with voters going to polling stations to cast their vote.

The party claims this would send a strong message to the government that an airport is not wanted.

Richmond Council in west London is currently holding its own referendum to give residents the chance to express their views on a third runway at Heathrow.

The cost of this is £67,000, which Labour leader Cllr Vince Maple said is evidence that the sky high costs quoted by opponents aren’t true.

February 28, 2013     More than 20,000 people who would be affected by the building of a Thames Estuary airport in north Kent are being asked for their opinion on the proposals. Volunteers for Rochester and Strood MP Mark Reckless are delivering ballot papers to 6,000 homes on the Hoo Peninsula. Mark Reckless said “This is a chance for people across the Hoo Peninsula to have their voices heard and help me get the Davies Commission to rule out an estuary airport once and for all.” Residents will be able to choose a “yes” or “no” answer and return it to the MP. The ballots will be collected and presented in one of three ways: as a petition in Parliament, to the Commission or to Boris Johnson, who supports the idea. Meanwhile John Olsen has been pushing his plan for a Cliffe airport again, ten years after it was rejected last time.   Click here to view full story…

There are also ballots in Richmond Council, Houslow and others, about the expansion plans of Heathrow.

April 5, 2013      Richmond are holding a referendum in May, as are Hillingdon and Hounslow councils, to show the Airports Commission and the industry that Heathrow is not an acceptable location for expansion.      Click here to view full story…

Hounslow Council Gets Thousands Of Responses On Airport

However, Mark Reckless is keen that Gatwick or Stansted airports are developed instead.

Mr Reckless has been particularly vocal in his opposition to a new hub airport in the Thames Estuary, an opposition he described as being based on “economic” reasons.

Whilst insisting that he retained an “open mind” on the future of the UK’s aviation needs and Heathrow, the Conservative MP emphasised his pleasure that Gatwick Airport had begun to campaign for expansion.

He hinted towards a preference for the development of multiple hubs in the South East, and in particular of Gatwick and Stansted.

In particular, Mr Reckless championed the case for a Crossrail spur to Stansted Airport, pointing to his work on this issue with fellow Conservative MP Zac Goldsmith.

by Mark Reckless MP (Conservative MP for Rochester and Stroud)

Gatwick’s announcement regarding a second runway has widened the scope of Britain’s aviation debate. This had been trapped in a false binary argument between Boris’s pie-in-the-sky proposals for a Thames estuary airport and a third runway at Heathrow.

While Boris proposed a brand new Estuary Airport as the sole solution for aviation capacity, he missed the point that there are other options, including a second runway at Gatwick, which could provide a valuable contribution to Britain’s aviation capacity. His spokesman seemed unaware of any irony in saying that ‘there is absolutely no point in simply scattering new runways randomly around the south-east’, when Boris himself continually seems to endorse new ways of scattering floating runways or whole airports around the Thames Estuary.

Since Gatwick was sold by BAA, it has undertaken a series of enhancements which have improved customer service and attracted new airlines from a variety of emerging markets. This expansion has already provided Britain with new trade routes to Asia. These improvements show how it could be viable for Gatwick, with an extra runway, to become a second London hub airport, competing – including on price – with Heathrow.

Gatwick currently operates with close to 10 per cent of its passengers connecting to another flight, compared to nearer 30 per cent at Heathrow, and is for now better placed than any other UK airport to develop as a real competitor to Heathrow. Competing hubs could improve service and even drive down ticket prices as the airports compete for customers and contracts. Heathrow could potentially focus on serving transatlantic routes, while Gatwick developed large numbers of new routes to Asia, with both airports operating dense European route networks.

Gatwick has already done significant preliminary consultation and opposition to Gatwick expansion could be less widespread and vociferous than for either Heathrow or a new airport in the Thames Estuary. Additional flight paths for Gatwick would disturb fewer people than at Heathrow and, unlike a Thames Estuary airport, would not intrude on Amsterdam Schiphol’s flight paths or put planes at high risk of bird strike.

The existing transport infrastructure from Gatwick to central London is reasonably good and Gatwick could easily have an improved and dedicated Gatwick Express Service, as well as good rail services to Kent. Infrastructure costs would be incomparably lower than the almost unimaginable levels of spending that would be needed to support a Thames Estuary airport.

Gatwick currently serves 197 destinations and 34 million passengers a year. It would be ridiculous not to take seriously the prospect of future expansion at Gatwick when it has long safeguarded space for a second runway, and now has the demand, capability and willingness to make use of it. What possible objection can Boris have to Gatwick spending its own investors’ money to provide yet greater connectivity for London and the UK?

Airports in the South East need to use their capacity in a “smarter way” to maximise potential, the London Assembly has said.

A report showed that only 47% of runway capacity at Stansted Airport was used during 2012.

The assembly said the statistics were worth considering before alternative schemes were approved.

Plans including a new airport in the Thames Estuary are being considered to increase capacity in the South East.

The report also suggested that passengers should be encouraged to switch from Heathrow to the other airports by improving transport access from central London during transfers.

A commission chaired by ex-Financial Services Authority boss Sir Howard Davies is to consider a number of options to expand capacity and report back in 2015.

In a statement it said it would “deliver a shortlist of credible proposals” and the “commission will also identify ways in which we can make even better use of the capacity which already exists”.