A new scientific report produced by CATE (Manchester Metropolitan University’s Centre for Air Transport and Environment) called “Mitigating future aviation CO2 emissions – timing is everything” shows that the real climate benefit of any action to cut aviation’s carbon emissions depends on the cumulative emission reductions between now and a future date, and not just on achieving a certain amount of emission reductions by a specific year (as ICAO has focused on). This is because CO2 has a long lifetime so concentration levels are determined by cumulative emissions over time. Early reductions result in a lower emissions trajectory than equivalent annual savings made at a later date. This highlights the critical importance of ICAO taking early action to cut emissions quickly, and increases the pressure on ICAO not to defer a decision on the adoption of a market-based measure (MBM). The report finds that biofuels are not effective as a solution to the aviation emissions problem, but that  improvements in technology and operational improvements offered the second best mitigation potential as a single measure.

A new scientific report (see below – full report here) released today highlights the critical importance of taking early action when implementing measures to reduce the climate impact of rapidly increasing emissions from aviation.  With a decision expected shortly on how and when to tackle international aviation emissions, this new report increases the pressure on the International Civil Aviation Organisation (ICAO) not to defer a decision on the adoption of a market-based measure (MBM).

Over the past 2 years momentum had been building towards a decision at the 38th ICAO General Assembly, scheduled to begin in Montreal in late September [1], on the need for an effective global MBM. But political differences amongst key states now threaten yet again a decision this year on how and when the sector should address its growing contribution to climate change – the next Assembly is not until 2016.

The report by Manchester Metropolitan University’s Centre for Air Transport and Environment (CATE) “Mitigating future aviation CO2 emissions – timing is everything” shows that the real climate benefit of any action depends on the cumulative emission reductions between now and a future date, and not just on achieving a certain amount of emission reductions by a specific year (as ICAO has focused on): CO2 has a long lifetime so concentration levels are determined by cumulative emissions over time. Early reductions result in a lower emissions trajectory than equivalent annual savings made at a later date.

The report shows that while the technology, operations and alternative fuels measures that are ICAO’s focus have the potential to make significant reductions in the climate impact of emissions from aviation, these will only come in the longer term given the lead times needed to develop and bring to market whereas immediate reductions from effective market based measures implemented now far outweigh the climate impacts of ICAO’s approach.

The report shows that a global MBM such as emissions trading introduced in 2012 and the existing European Emissions Trading Scheme (EU-ETS) for aviation provide the largest single incremental improvements in radiative forcing (RF) [2] and temperature response by 2050 (a 30.1% improvement in RF for a global MBM and around 15% in RF for the EU ETS compared to a business as usual scenario based on technology and operational improvements).

Based on best estimates of likely future uptake, biofuels would have a minimal climate impact by 2050.

Commenting on the report’s conclusions Bill Hemmings of T&E said: “This robust analysis is compelling and should be a wake-up call to States and industry as they prepare for ICAO’s Assembly. ICAO’s traditional approach focussing on technology, operations and biofuels falls far short of what is needed.”

Meanwhile, Tim Johnson of NGO Aviation Environment Federation (AEF) said: “ICAO has already demonstrated that its own modest goal of carbon neutral growth by 2020 will be impossible to achieve without market-based measures, while the scale of reductions required to contribute towards a 2 degree pathway reinforces that argument unequivocally.  It’s time to stop debating the ‘if’ and focus on the ‘how’.”

What is the best and most cost-effective way of mitigating future aviation emissions? Undoubtedly a mix of strategies is required to tackle the rapidly growing emissions of CO2from aviation. However, there are some clues to guide decision makers available from the well-established science of CO2.

In our last report we looked at ways in which aviation CO2 emissions could be mitigated, and how far the mitigation potential of each measure got us towards various ‘goals’ for the reduction of international aviation emissions of CO2. ‘Goals’ tend to be focused on achieving an emissions target by a certain date. However, this approach does not factor in the physics of CO2 – namely the accumulative nature of CO2, its long lifetime in the atmosphere and its consequent effect on climate. The emissions’ pathway by which a goal is achieved over time matters more than simply achieving the goal itself.

In this work we conducted over 11,000 complex calculations to rank the ‘best’ mitigation strategies, both as individual measures and combined strategies, in terms of their climate impacts – calculated as radiative forcing and global mean temperature response.

We find that emissions trading, as a measure, offers the single largest incremental improvement in climate impact by 2050.

The least effective strategy is biofuels, using the assumptions of the UK Committee on Climate Change’s assessment of potential biofuel availability in 2050, even at what they termed “speculative” levels.

Maximum feasible reductions from improvements in technology and operational improvements offered the second best mitigation potential as a single measure.

The clue as to why an efficiently operated emissions trading system is so effective lies in its possibility to reduce emissions quickly. This is a fundamental point.

Other mitigation strategies (which must still be pursued) tend to offer ‘late savings’ as the relevant technologies and fleet infiltration develop.

What matters more is the total cumulative emissions from aviation by 2050, rather than simply achieving some arbitrary goal by that date.

This accords with the physics of CO2 but is often ignored by policy makers and the developers of organisational emission goals and targets. 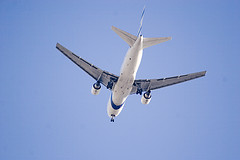 New scientific analysis out today on the impacts of the aviation industry on our climate, should give pause to government and industry leaders.

The report, produced by the Manchester Metropolitan University’s Centre for Air Transport and Environment, titled “Mitigating future aviation CO2 emissions – timing is everything” finds that a new market-based carbon trading system for the airline industry cannot be delayed any longer.

This new analysis comes at a very crucial moment, as the International Civil Aviation Organization (the UN agency responsible) meets this September to decide on whether to delay a global market-based program for curbing aviation emissions (again) or begin implementation as soon as possible. If a decision to implement is not reached at the ICAO meetings in September, the next opportunity for a decision will not be until 2016 at the next general ICAO assembly.

A further delay is not an option according to this report’s authors. Their modeling shows that all the efforts already underway by airlines to reduce their emissions are not enough and that a global market-based trading system must also be implemented sooner, rather than later. If a decision is put off again by ICAO to 2016, we lose the cumulative financial and environmental benefits that are necessary to meet the aviation industry’s future reduction targets. Early reductions result in a lower emissions trajectory than equivalent annual savings made at a later date.

The report also shows that a global market based emissions trading program and the existing European Emissions Trading Scheme (EU-ETS) for aviation provide the largest reductions in climate change impacts by 2050. (A global market based trading system provides a 30.1% improvement from business as usual; the EU ETS provides a 15% improvement; and better technology, adoption of biofuels, and operational changes combined provide a 9% improvement.)

So far, American airline companies have been a proverbial fly in the ointment when it comes to seeing a global market-based trading system. Last year, the industry went so far as to seek (and receive) federal legislation that would exempt them from a market-based system in the European Union. US airlines do not want to pay a fee for the pollution they are responsible for and have spent millions on lobbyists in Washington, DC to avoid a tax on the carbon they emit.

Regardless of past indiscretions, this new report should serve as a wake-up call to ICAO, the US government and the US airline industry. If they don’t listen, it is not just the airlines that will suffer in the long term.