There was a European Commission conference in Talinn on 16-17th October, organised through Infrastructure TEN-T (Trans-European Transport Networks).  A similar meeting has been held annually for several years. Its aim was for European Commission Vice-President Siim Kallas, Ministers, Members of the European Parliament and key stakeholders to gather to discuss the future development of the trans-European transport network.  One of the speeches at the conference was by Madeleine Wahlberg, who has spent many years researching and lecturing in the planning and public policy field, particularly focusing on the decision processes behind major schemes. She spoke of the Grands projets inutiles et imposés (big, unnecessary imposed projects) across Europe – such as huge road schemes, airport building, high speed rail lines, motorways and barrages. She made the point that opponents of these huge schemes want social justice,and they want transport that is environmentally responsible, that adopts a Life Cycle Assessment and that applies the precautionary principle. Current TEN-T proposals embody massive environmental destruction.
.
Tweet


There was a European Commission conference in Talinn on 16th and 17th October, organised through Infrastructure TEN-T (Trans-European Transport Networks).  A similar meeting has been held annually for several years. Its aim was for European Commission Vice-President Siim Kallas, Ministers, Members of the European Parliament and key stakeholders to gather together to discuss the future development of the trans-European transport network.
The groups in Italy fighting the Turin-Lyon tunnel and the high speed train tunnel and station under Florence went to a conference on European transport in Talinn with groups from other countries who are also fighting unnecessary imposed megaprojects (they met at the forum on the topic in Stuttgart, July 2013).  They demanded to be heard as representatives of the many European citizens who do not agree with European transport policy.  The spokeswoman of the activists was Madeleine Wahlberg (UK), whose speech appears below.

Madeleine Wahlberg has spent many years researching and lecturing in the planning and public policy field, particularly focusing on the decision processes behind major schemes. She has been involved in many public consultations on behalf of different parts of Government.  One of her articles, on HS2 is at “Which will it be – HS2 or local transport investment in the regions?“

Speech of the Forum against Unnecessary Imposed Mega Projects 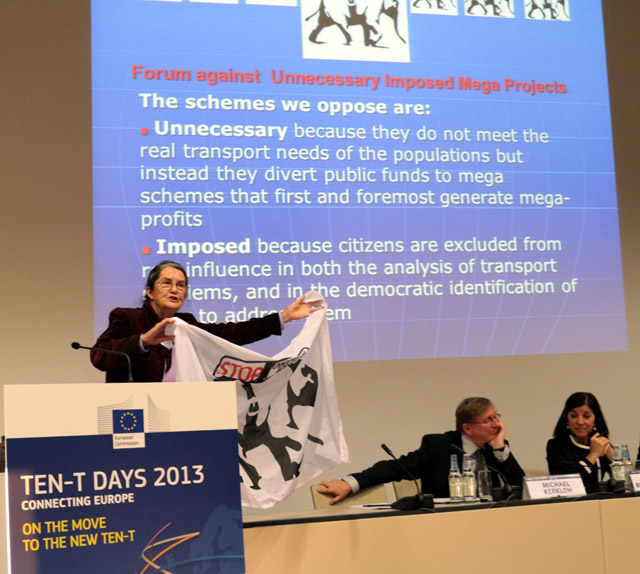 ‘Joining Forces to Implement the TEN-T – everyone on the move’
Speech of the Forum against Unnecessary Imposed Mega Projects
by Madeleine Wahlberg
Why are we here?

·       and Imposed because citizens are excluded from real influence in both the analysis of the transport problem, and in the democratic identification of ways to address that.

·       The symbol of our Forum is the ‘white elephant’ which, in parts of Asia, is an idiom for gifts that are useless, likely to bankrupt the recipient, called sacred, and cannot be refused.  A perfect symbol for so many of the TEN-T projects that we oppose.

What is our common experience?

·      These projects exclude the effective participation of the population in the decision-making process.
In the introductory remarks for the 2013 TEN-T Days it says:  “Furthermore, the increasing interest of citizens and civil society representatives will be taken into consideration.” But what the citizens are offered right across Europe are ‘Observatories’ like in Susa Valley, ‘Dialogue Forums’ like in Fehmarn, ‘Conciliation platforms’ like in Stuttgart, or ‘Community Forums’ in the UK, all of which are laughable. They are controlled by the organisers of the mega projects and are not in any sense genuine participation spaces.
·      These projects increasingly criminalise dissent while giving privileged access to powerful interests through lobbying and political influence.  In some cases this undoubtedly extends to the mafia. The European Commission has to take responsibility for supporting this.
·      Faced with the serious social conflicts that these projects cause, governments and administrations have operated arrogantly behind closed doors and treated proposals by citizens with contempt.
·      The official justification for these new infrastructure projects is in every case based on false cost-benefit analyses, fanciful capacity and demand figures and mythical job creation claims – a situation of permanent deception.
·      These mega projects are framed so as to guarantee exorbitant profits for large industrial and financial groups, guaranteed by public funds and leading to public debt for example through Eurobonds. On the other hand they destroy small and medium-sized enterprises and locally-based economic systems, which generally create more employment and permit more equitable local development.
·       We do not accept the TEN-T view that the Core and Comprehensive networks can be harmlessly separated and that their integration is only a matter of “the last mile”. Not only will the prioritised Core routes monopolise massive public funds to the serious detriment of local transport needs BUT the isolation of the Core routes will paralyse the integration of long distance and local networks – a Berlin Wall approach.
·      We are very concerned about the Europe 2020 Project Bond initiative and the Credit enhancement initiative. The European Commission and the EIB are using public resources to allow the expansion of financial markets through the financialization of useless mega projects. The disaster of the Castor project in Spain proves that such projects could even be a threat to the security of European citizens, although they are asked to bear the costs of such development. This is unfair and unacceptable and it’s a clear example of why we call for a halt to the Europe 2020 Project Bond initiative.
·      On the 8th of June 2010 during the TEN-T Days in Zaragoza, Siim Kallas asked: “Where should we make crucial investments to facilitate better functioning of existing networks? It is clear that a big jump in infrastructure is not possible. Building new railways, roads, airports, and ports is enormous work and takes a long time and bigger resources. All smart transport systems can bring larger and faster benefits.“    link
·       Now, in 2013, what we see is not this, but a changed priority towards projects that are not affordable by either our economies or environment.
·     We can use the STOP HS2 summary to apply to all these projects: ‘No business case, no economic case, no environmental case, no democratic case, no social case, no money to pay for it’.
What do we want?
·     We want transport that is environmentally responsible, that adopts a Life Cycle Assessment and that applies the precautionary principle. Current TEN-T proposals embody massive environmental destruction.
·    We want a developmental process that is honest, open to scrutiny and based on reliable and independent evidence, not one that fabricates data and hides decisions.
·    We want a transport governance system that does not criminalise dissent and militarise enforcement as in Susa Valley, Notre-Dame-des-Landes and the disproportion of the Spanish asking for 9 year prison sentences for someone who threw a pie in France. Instead we want a system that understands that dissent is a central part of democratic governance.
What we want you to do is:
Conclusion
If we remind ourselves that the European Community Institutions are first and foremost at the service of European citizens, then we say that the European Commission has to take responsibility for inflicting horrendous damage to environments and communities through many of the proposed TEN-T schemes right across the EU.
We do not have to develop unnecessary imposed mega projects in order to have effective and sustainable transport of goods and people. That is a choice that all of you are all able to make.
Not only is another Europe possible, it is essential.
.

Earlier – from the campaign against a proposed new airport at Nantes:

and a bad translation of the above into English:

From July 25 to 29 the 3rd European Forum on large unnecessary imposed projects will be held in Stuffgart.  In France, we have Notre-Dame-des-Landes airport, which hosted the forum in 2012. Italy has the line “Lyon-Turin” and in Germany, the proposed underground railway station in Stuttgart. These three flagship projects represent the cradle of an economic and environmental resistance and the forum will be an opportunity for exchange between European anti-globalization.

After the first Forum in 2011 in Susa in Italy and the second Forum in 2012 in Notre-Dame-des-Landes in France, opponents of the proposed underground station Stuttgart 21 decided to organize the 3rd Forum against these major unnecessary imposedprojects  from 25 to 29 July 2013 in Stuttgart. This forum will be held in the former depot wagons Railway with a simple idea: “the movement intends to advance.”

Building on the successful experience of the two previous forums, opponents Stuttgart21 want to continue this exchange and reconciliation of movements in the direction of a common resistance and mutual solidarity: “It is in the union of forces that the victories of tomorrow emerge. ” The Stuttgart Forum wants to pursue this path with the following objectives:

· To exchange and mutual support in Germany, Europe and also worldwide …

· To safeguard the foundations of life, for nature and for society

· For the discussion of the causes and background of these major projects and general conditions imposed by society, societal perspectives and alternatives.

The major projects are unnecessary and imposed the redistribution of public funds in the few private pockets. They are useless for the people, and the consequences are: destruction, removal, damage.

They guarantee profit to industrial and banking groups, they are contrary to the public interest and are imposed by methods of lies, brutal police intervention and repression of people who oppose it.

What do we want to achieve ?

The new EU infrastructure policy will put in place a powerful European transport network across 28 Member States to promote growth and competitiveness. It will connect East with West and replace today’s transport patchwork with a network that is genuinely European. The core network will be established by 2030.

The new policy establishes, for the first time, a core transport network built on 9 major corridors: 2 North-South corridors, 3 East West corridors; and 4 diagonal corridors. The core network will transform East West connections, remove bottlenecks, upgrade infrastructure and streamline cross border transport operations for passengers and businesses throughout the EU. It will improve connections between different modes of transport and contribute to the EU’s climate change objectives.

Financing for transport infrastructure will triple for the period 2014-2020 to €26 billion. This EU funding will be tightly focused on the core transport network where there is most EU added value. To prioritise East West connections, almost half the total EC transport infrastructure funding (€11.3 billion Euro from the Connecting Europe Facility, CEF) will be ring-fenced only for cohesion countries.

Transport infrastructure is fundamental for the smooth operation of the internal market, for the mobility of persons and goods and for the economic, social and territorial cohesion of the European Union. The EU 27 comprises 5.000.000 km of paved roads, out of which 65.100 km are motorways, 212.800 km of rail lines (of which 110.458 km electrified), and 42.709 km of navigable inland waterways.