Ways to improve airport capacity without extra runways – from NATS

NATS is the organisation that manages air traffic and airspace within the UK. Without efficient and safe use of airspace for more flights, there could be no airport capacity expansion. A blog by a NATS manager says there are many ways to get more air traffic onto the existing runways. He writes that NATS has developed tools and analysis methods that allow them to identify where growth is being constrained. Better co-ordination and sharing of information across an airport can help improve efficiency, and getting the maximum use from one runway – which could be as effective as sub-optimal use of several.  He hints at mixed mode at Heathrow, using both runways for both take-offs and landings, rather than the current “runway alternation” by which Londoners get half a day of respite, when the runways switch use at 3pm.  With a mix of larger and smaller planes, with the problem of air turbulence from the larger ones, it is important to optimise the landing sequence for aircraft arriving at busy capacity constrained airports to maintain capacity and throughput. Optimal planning reduces the time aircraft take from starting up their engines, to take-off.
.
Tweet 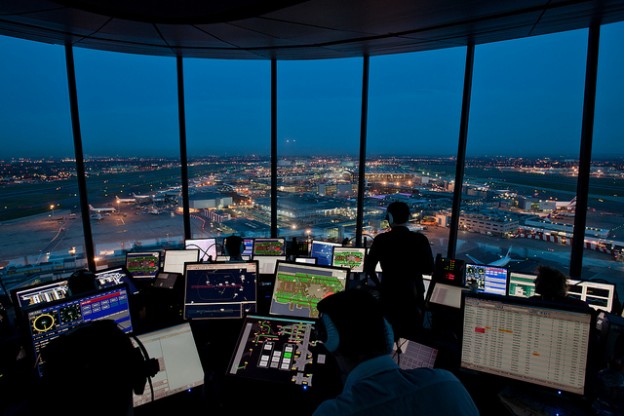 Back in August I wrote about why measuring airport capacity means more than just tarmac and terminals. The same is equally true when it comes to increasing capacity.

But, before you can improve anything you need to understand its current level of performance and where improvements might be possible. At NATS we’ve developed tools and analysis methods that allow us to assess the key performance metrics of the air traffic management (ATM) operation both in the air and on the ground.

We use those tools to analyse things like airborne and ground based radar data, airport operational database logs, airline schedules and numerous other sources of information in order to build up a comprehensive understanding of the operation.

From this rich dataset we can then look at overall performance, benchmark it and then identify which elements are the most constraining.

1.    Sharing information across the airport

An airport works much like a relay race where the team performance is dependent upon each individual runner. For an airport to operate efficiently – each part of the team – from the check-in and baggage handling through to air traffic control – has to be of an equally high standard.

Through years of support to the seasonal capacity declarations for some of the world’s busiest airports, NATS has a pretty unique understanding of just how important each component of an airport operation is. We use huge amounts of operational performance data to inform discussions with the rest of the airport community about how their individual contributions affect overall performance.

It sounds simple, but often when we do similar assessments overseas we find that the availability and sharing of this sort of information isn’t commonplace. And experience has shown that as soon as the right people are engaged and the right information is available to them, improving operational performance becomes part of the working culture.

Having two is not always better than one. We recently completed a capacity enhancement project for a busy international airport in the Sub-Continent where the two runways cross each other and therefore require aircraft movements to be carefully coordinated.

Through a detailed capacity review and benchmarking exercise, we were able to recommend that the airport should focus its efforts on using just one runway to provide what’s called HIRO – High Intensity Runway Operations.

We used state-of-the-art fast-time simulation tools to evaluate the potential gains and as a result, the consistency and performance of the airfield has been boosted together with an increase in the declared capacity. The second runway is still available if needed, but is now only used tactically or as a contingency.

If two or more runways are available and can be used independently of each other, then the key to maximise capacity is to ensure each can be fully utilised at all times.

This can be achieved by flexing the mode of operations and allowing take off and landings from each runway. This can then provide short term relief for arrival or departure peaks and will also ensure individual runway demand is as balanced as it can be.

By looking at the airport operations against the challenges posed by airline schedules, it is then possible to find ways to enhance performance. As part of a typical assessment we would normally use simulation and other tools in order to understand the operational impacts.

A good example from a recent study is where we were able to demonstrate capacity benefits by revealing the trade-offs of additional taxi time and fuel burn for using a non-preferred runway, compared to a short taxi time but a longer wait when operating off a closer runway.

4.    Getting your sequence right

Arrival Manager – or AMAN – is an advanced controller support tool that provides real-time information on the optimum landing sequence for aircraft arriving at busy capacity constrained airports. Because different sizes of aircraft need to be separated to varying distances, getting that optimum order right is absolutely fundamental to maintaining capacity and throughput.

Similarly, tools such as the TSAT (Target Start-up Approval Time, which gives individual aircraft an optimal time to start their engines prior to departure) can significantly improve the departure start-up order and sequence, thereby reducing delay and enhancing capacity.

This is something that is a key focus for NATS within our own operations in the UK, but it’s also something that we are supporting other organisations with around the world.

Aircraft queuing at Changi Airport, Singapore. NATS has been working at the airport to help increase capacity. Image by Simon_sees vis Flickr

Probably the most important factor for maximising airport capacity without building any new infrastructure is simply the ability to consistently deliver an efficient operation.

This sounds obvious, but when we do capacity enhancement projects around the world, this is typically the least understood area. We use our data capture and analysis tools to provide airport operators with the evidence which demonstrates where inefficiencies lie. Our air traffic experts are then able to interpret that information and through observing the live operation, are able to recommend changes to deliver a much more consistent service. Our simulation tools can then predict what the capacity gains would be.

Quite often these gains can be considerable. For example, a 10-25% potential capacity increase is not uncommon and in some cases it can be much more.

The environmental efficiency of UK airspace has improved over the last three months of the year, continuing a trend begun in the spring.

NATS is unique in measuring the efficiency of the aircraft flying through its airspace using its 3Di metric. Each flight is compared to a scale where zero represents total environmental efficiency. Most flights usually score somewhere between 15 and 35, with the UK Civil Aviation Authority setting NATS a target score of 24.

The latest statistics show the running average score for 2013 now stands at 23.5.

This represents an improvement over the beginning of the year where poor weather saw the 3Di score rise above the CAA target.

Ian Jopson, NATS Head of Environmental and Community Affairs, said: “These latest results show that we’re well and truly back on track and it is especially pleasing to see consistent improvement over the course of the busy summer season, with August in particular scoring very well.

“Severe winter weather will always present a challenge, but we will be doing our best to continue the current improving trend well into next year and beyond.”

NATS environmental programme involves delivering long-term improvements to the efficiency of UK airspace. Since 2008 it has helped avoid the release 800,000 tonnes of aircraft CO2 into the atmosphere – the equivalent to cutting £160 million from airline fuel bills.