A year after after JAL and ANA Holdings grounded their Dreamliner fleets after separate issues with batteries overheating, there has been another battery fire incident. In 2013 all of Boeing 787s were then taken out of service for over 3 months while the plane manufacturer sought a fix for the problem.  Engineers doing maintenance on a parked 787, with no passengers on board,noticed smoke or gases venting from the battery compartment.There were also warning lights that flashed, signalling a battery fault. The smoke vented from the plane and a battery cell showed signs of melting. JAL said on checking the battery, encased in  steel containment box, they found 1 of 8 cells had leaked a liquid. A relief valve designed to open when pressure rises inside a cell had opened,The plane remains grounded but the other 787s owned by ANA are continuing to operate normally. The issue of who will pay for any losses incurred by keeping the jet from flying will be determined after the plane is back in the air, said a spokesman for Japan Airlines, which operates 13 Dreamliners.  Eight airlines have 787s. The battery problems and groundings were expensive for Boeing last year. The cause of the battery problems has not been determined, but changes were made to enclose the batteries better.
.
Tweet 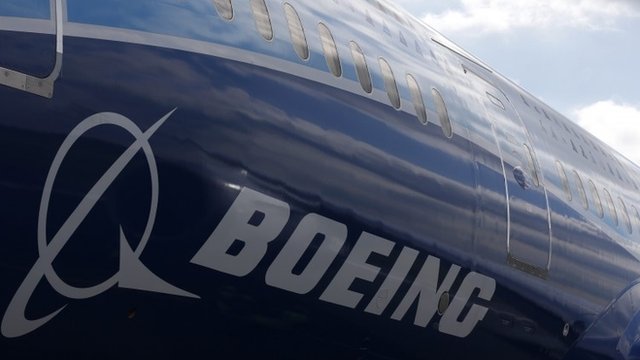 BBC’s Rupert Wingfield-Hayes: “Warning lights were going off showing there was something wrong”

Japan Airlines has grounded a Boeing 787 Dreamliner aircraft after detecting smoke or gases that may have come from faults with the main battery.

The problem was discovered during routine maintenance, and is a reminder of the battery faults that grounded all 787s for three months last year.

Boeing said it was aware of the issue and is working with Japan Airlines.

The aircraft maker said that early indications suggested that a single battery cell had released gases, and that the warning system had operated as planned.

No passengers were on board.

Any 787 battery problem is a sensitive issue. The worldwide fleet of Dreamliners was grounded last year while investigators looked into why two batteries on separate aircraft overheated in less than two weeks.

Boeing redesigned the battery system, although the precise cause of the problem was never conclusively proved.

Richard Westcott, the BBC’s transport correspondent, said: “Boeing says it appears that one cell within the lithium ion battery had gone wrong. The number of cells is highly significant.

“There are eight in total for each battery, and if the chemicals spread from one to the next it can potentially start a fire.

“Boeing never did solve the battery problem that grounded the entire Dreamliner fleet last year. Instead, Boeing put in a raft of safety measures to contain any future issues.”

There are 115 Dreamliners currently in service with 16 airlines.

BY TIM KELLY AND ALWYN SCOTT

(Reuters) – A Japan Airlines (JAL) (9201.T) Boeing 787 Dreamliner remained grounded at Tokyo’s Narita International Airport on Wednesday as regulators demanded checks to see if the aircraft was fit to fly, a day after white smoke vented from the plane and a battery cell showed signs of melting.

The incident comes a year after JAL and ANA Holdings (9202.T) grounded their Dreamliner fleets after separate issues with batteries overheating. All of Boeing Co’s (BA.N) 787s were then taken out of service for more than three months while the plane manufacturer sought a fix for the problem.

ANA said its 787s were operating normally on Wednesday.

“The incident only happened yesterday, so it’s difficult to say when checks, or any repairs would be complete,” an official from the Japan Civil Aviation Bureau told Reuters. The agency will oversee inspections of the power pack by battery maker GS Yuasa Corp (6674.T), JAL and Boeing.

The latest incident with Boeing’s state-of-the-art plane, which is built with carbon-fiber composite materials and a powerful electrical system to reduce weight and improve fuel efficiency, raises fresh concerns about the plane’s safety and reliability.

Boeing said it was “aware of the 787 issue that occurred Tuesday afternoon at Narita, which appears to have involved the venting of a single battery cell.” Venting is the process of fumes and heat being channeled outside the battery casing and the aircraft when the battery overheats.

It noted the issue took place during scheduled maintenance with no passengers on board. “The improvements made to the 787 battery system last year appear to have worked as designed,” it added. Boeing shares closed down 0.5 percent at $140.01 on the New York Stock Exchange.

The issue of who will pay for any losses incurred by keeping the jet from flying will be determined after the plane is back in the air, said a spokesman for Japan Airlines, which operates 13 Dreamliners.

Global regulators grounded all 50 Dreamliners owned by eight airlines on January 16, 2013. They remained out of service while Boeing redesigned the battery, charger and containment system to ensure battery fires would not put the plane at risk. The cause of the battery problems has not been determined.

Since then the number of 787s in operation has more than doubled to 115 planes at 16 carriers. ANA remains the world’s leading operator with 24 Dreamliners.

The Japan Transport Safety Board, which is probing the battery overheating on an ANA flight last year, will not directly inspect the latest damaged battery, but will gather information on it as it tries to determine the cause of the earlier incident, a spokeswoman for the agency said.

The U.S. National Transportation Safety Board said it also was gathering information. The NTSB is still investigating a battery fire that occurred on a JAL 787 in Boston a year ago, and said last week it is due to complete that investigation in March. It has not said whether this week’s incident would affect the timing of the Boston investigation.

The U.S. Federal Aviation Administration, which certified Boeing’s revamped 787 battery system as safe last year, said it was working with the aircraft maker and regulators in Japan to investigate the battery malfunction. The agency has yet to release the findings of a review of Boeing’s design, manufacture and assembly of the 787 that it said would be released last summer.

United Airlines (UAL.N), the only U.S. carrier to fly the 787, was conducting precautionary checks on its Dreamliners, said a person familiar with the matter who asked not to be named as they were not authorized to speak publicly. United declined to comment on the inspections, saying only that “Our 787s are operating normally and we have not experienced any issues with our batteries.”

Air India AIN.UL, which has 11 Dreamliners, will wait to know the details of the latest battery incident before taking any action, Chairman Rohit Nandan said in a text message on Wednesday in reply to a question from Reuters.

JAL said maintenance engineers who were in the cockpit preparing the aircraft to fly to Bangkok on Tuesday, saw white smoke outside the plane. Warning lights in the cockpit later alerted them to possible faults with the main battery and charger. On checking the battery, encased in a steel containment box, they found one of eight cells had leaked a liquid. A relief valve designed to open when pressure rises inside a cell had opened, JAL said.

The liquid that leaked did not appear to breach the containment box, said a person familiar with the matter, who was not authorized to speak publicly, and it appears that any fumes vented through a port that is part of the containment system – a sign that the system likely worked properly.

The 250-seat Dreamliner, which costs about $212 million at list price, has been plagued with problems. It was more than three years late to enter service after issues with parts, and has since suffered a series of mishaps with brakes, fuel lines, electrical panels and hydraulics, and other systems.

In July, after the 787 was cleared to return to service, an Ethiopian Airlines ETHA.UL jet caught fire at London’s Heathrow Airport, scorching the fuselage. The cause of the fire was never firmly established, but UK investigators traced the probable cause to faulty wiring of a lithium battery in an emergency beacon in the ceiling near the tail of the plane.

Also in July, Qatar Airways took one of its 787s out of service for what it said was a “minor” technical issue. Industry sources later told Reuters they were treating seriously reports that the aircraft had been grounded after smoke was seen near an electrical panel.

Aerospace experts said the latest incident was troubling, but were cautious about drawing broader conclusions.

Richard Aboulafia, an aerospace analyst at Teal Group in Fairfax, Virginia, said the incident raised two questions: whether the new system that contains the problem had worked, and whether the root cause of the battery problems will ultimately be discovered.

“The real issue with containing the problem, rather than getting to the root cause of the problem, concerns economics,” Aboulafia said. “Incidents can be successfully contained, but if you continue to see incidents like these, you’ve got a mounting bill from taking jets offline, and repairing their battery systems. You’ve got an image problem, too.”

Hans Weber, a former FAA adviser and president of TECOP International, an aerospace technology consulting firm, said the incident might provide more clues about the cause of the problem, such as overcharging. He said it appeared the containment system worked.

“It limited the problem to one faulty cell. It contained the problem and vented the fumes outside the airplane, as designed,” he said, basing his comments on JAL’s initial statements.

Shares in GS Yuasa closed down 0.7 percent at 582 yen in Tokyo on Wednesday, while the benchmark Nikkei average .N225 ended up 2.5 percent.

Fire breaks out on an empty, parked Ethiopian Airlines Dreamliner, at Heathrow

A fire occurred in an Ethiopian Airlines Dreamliner, parked at a remote parking stand. There were no passengers on board and the plane was not due to fly for several more hours.  Pictures showed the aircraft on the runway, surrounded by fire engines and covered in flame-retardant foam; TV footage showed an area on the fuselage in front of the tail that appeared to be scorched.  It is not known if the battery system was associated with the fire, and the batteries are not in that part of the plane. A statement released by Ethiopian Airlines said the jet had been “parked at the airport for more than eight hours” before the fire. The lithium batteries were the cause of the previous incidents that led to the grounding of the Dreamliner in January. Flights at Heathrow were suspended for an hour and a half. Heathrow said suspension is a standard procedure if fire crews are occupied with an incident. BA now has two Dreamliners and a BA spokesman said it was too early to say whether its two would now be grounded. On April 27, Ethiopian Airlines was the first carrier to resume flights with Dreamliners..https://www.airportwatch.org.uk/?p=3720