Chancellor says there will be a £300 million “Transport Development Fund” for “transformative transport infrastructure projects”?

The Autumn Statement and Spending Review, by the Chancellor did not have anything to say about Air Passenger Duty, so fortunately it has not been cut again.  Due to the amalgamation of the distance bands, from 1st April 2015, so any trip of over 2,000 pays the same amount of APD – and the removal of APD for children (those under 12 from May 2015, and those under 16 from May 2016) the receipts to the Treasury from APD are lower than anticipated several years ago. The forecast receipts from APD in 2018/19 are now £.0.8 billion lower than forecast in the Autumn Statement in 2013. There is no mention of a new runway in the Autumn Statement, and no money set aside for road or rail work associated with it. However, “The Spending Review and Autumn Statement provides £300 million over the next 5 years for a new Transport Development Fund, for the next generation of transport infrastructure projects. This could include providing development funding for projects such as Crossrail 2 and proposals emerging from the Northern Transport Strategy, following advice from the NIC at Budget 2016.  [NIC is the National Infrastructure Commission,  under Lord Adonis. It is in theory not looking at airport-related issues]. The DfT will have a 37% cut in its operating budget, though the aviation section is thought to have a 30% increase for runway delivery.
.
Tweet 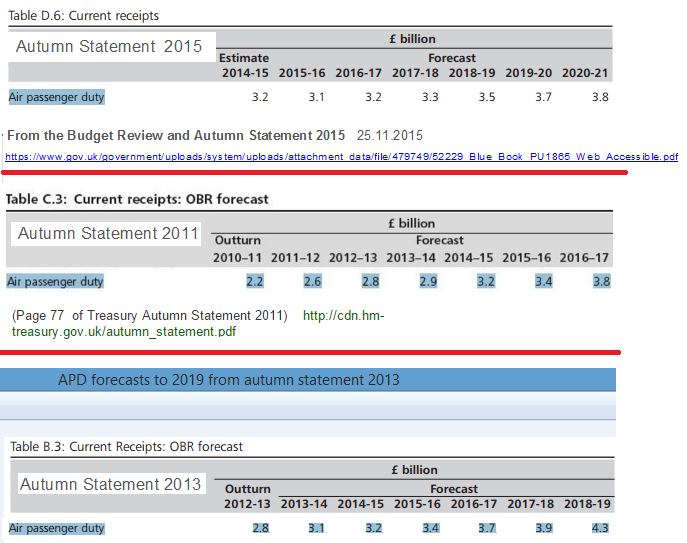 “By ensuring Britain’s long term economic security, the government is able to spend £4 trillion on its priorities and will take action to:

(among many other things)
– double investment in housing to support home ownership, while also investing in the transport, science, energy and culture that are vital for the country’s long term economic future.”

.
“Because the government is taking the difficult decisions to fix Britain’s finances, it can afford to prioritise investment in Britain’s long term future: in education, skills, infrastructure and science. The Spending Review and Autumn Statement:

– increases transport investment by 50% to £61 billion over the Parliament – including starting construction on High Speed 2, spending £13.4 billion on the Roads Investment Strategy and
over £5 billion on roads maintenance.”

1.155   Because the government is taking the necessary steps to put the public finances in order, it can make the long term investment needed to build a prosperous nation. This means investing in education from childcare to college. It means transport and infrastructure that compares with the best in the world. It means promoting a dynamic economy and creating the conditions for British businesses to succeed. Together, these will drive productivity, and improve prosperity for working people.

–
Under
Rail
1.199 The Spending Review and Autumn Statement provides £475 million over the
next 5 years to fund large local transport projects, enabling local areas to bid for
funding for projects that would be too expensive for them to pay for by themselves,
such as the Lowestoft Third River Crossing and the North Devon Link Road.

1.200 The Spending Review and Autumn Statement provides £300 million over
the next 5 years for a new Transport Development Fund, for the next generation
of transport infrastructure projects. This could include providing development funding
for projects such as Crossrail 2 and proposals emerging from the Northern Transport Strategy, following advice from the NIC at Budget 2016.  [NIC is the National Infrastructure Commission,  under Lord Adonis. It is in theory not looking at airport-related issues, See link].
—–

Transport experts have questioned how the government’s can deliver its big infrastructure projects now that the Department for Transport has had one of the biggest operating budget cuts.

Although George Osborne, revealed plans to increase transport capital spending by 50% to a total of £61 billion over the 5 years of this parliament, the DfT will be hit with a 37% cut to its operating budget. Within these cuts, the department will see a 12% cut in administration costs.

Richard Threlfall, head of infrastructure at KPMG, said the cuts at the DfT were “eye-watering”.

Transport for London has seen its capital funding maintained, with £11bn for investments in Crossrail, new London Underground trains and a network of Cycle Superhighways.

But TfL will have its overall funding reduced by £2.8 billion by 2021 as the DfT cuts TfL’s general grant funding.  £13bn will be invested in transport infrastructure in the north of England.

A new £300 million Transport Development Fund will be created that will provide financial support for projects like Crossrail 2 over the next 5 years, while £475 million will go towards funding large local transport projects, such as the North Devon Link Road.pending review updating the government’s economic plans

Transport experts say the majority of the big transport infrastructure projects had previously been announced, such as the Road Investment Strategy which was included in last year’s Autumn Statement.

Meanwhile, regardless of the cost to the government of all the surface access infrastructure – which the government has said it will not pay for – Heathrow keeps on trying to make out that its runway is a foregone conclusion ….

Heathrow ‘gets ready’ for third runway

Heathrow’s boss says the airport will be able to “move quickly” if it is given the green light for a third runway.

CEO John Holland-Kaye told the AOA annual conference in London that the airport had already set up an organisation to build a new runway – even though the government has yet to decide whether it should go ahead or not.

“We have been getting ready so that we can move quickly,” said Holland-Kaye.

“We have put the internal organisation in place, we have started tendering for the supply chain, we are working with the regions of the UK to create jobs while we build as well as when we have built.

“We are working with councils to ensure that we support local communities as well as provide skilled jobs following expansion, and we are engaging with those 750 households to listen to their concerns.

“This may sound like a lot of planning, given that we don’t have a decision yet, but my experience from building Terminal 2 is that when you get to the end of a big project, you always wish you had another six months – so best to start early.”

The government is due to make a decision by the end of the year on the Airports Commission’s recommendation that Heathrow should be allowed to expand.

“You may have seen speculation that they could defer a final decision until after the mayoral election and think that a decision that has waited for 40 years, that will set up the UK for generations to come as a leading global economy, could wait another six months,” said Holland-Kaye.

“But most of the people I speak to, including those who still oppose Heathrow expansion, just want the government to make a decision and get on with it.”

Gatwick, which had been initially short-listed as a candidate for expansion by the Airports Commission, has also been making its case for a second runway.