While the authorities in Loire Atlantique are hoping to start work on the new Nantes airport, to be built over good farmland and wetland at Notre-Dame-des-Landes, (NDDL)opponents say this is premature. While the French Prime  Minister, Manual Valls, is keen for work to get started, the main opposition group to the airport plan – ACIPA – say President François Hollande  has recently confirmed that the legal challenges should be allowed to run their course. There are still some procedures to go through. Opponents produced a huge beach art protest – writing in the sand: ” Pour le climat, pas d’aeroport a Notre-Dame-des-Landes.”  ACIPA points out that when the airport and its backers say they will be “resuming” work on the site, they never in fact started. ACIPA also points out that the tendering for work contract is also a PR thing, as various administrative permits must first be obtained.  The new NDDL airport is being considered as one of a class of  Grands Projets Inutiles et Imposés – big unnecessary imposed projects – along with HS2 in the UK,  a new high-speed Lyon-Turin line,  gold mining using cyanide in Romania, and a high speed rail line in the Basque Country. A people’s tribunal in Turin will look at all these cases  to reach a joint decision that will have ethical, moral, political value, in the broadest sense.
.
Tweet

Beach Art on a beach Barre-de-Monts (Vendee). Facing strong opposition, coupled with thinly veiled threats of administration, the project was cancelled.
Le collectif avait néanmoins laissé entendre :
“Comme les crayons de dessiner,
il sera difficile d’empêcher les râteaux de ratisser !”-
The collective had nevertheless suggested:
“Like pencils drawing, it will be difficult to prevent the rakes from raking!” –
It was done on  October 31, 2015!
For this artistic fresco, made ​​a few weeks before COP21, while the government hopes to get going on the start of work, the group draws attention to the terrible climate threats represented by “grands projets inutiles imposés” – big useless imposed projects – (GPII) which includes the proposed airport in Notre-Dame-des-Landes!  [And HS2].
“On the eve of COP21, the government should consider the important background work of the opposition movement and abandon such a useless, expensive and destructive project
.
“The collective Indre / Saint-Herblain Against airport project at Notre-Dame-des-Landes http: // committee -indre-stherblain-soutien-nddl.blogspot.fr/

“Resumption of Work” or com operation?

On October 30, 2015 in the evening, Loire Atlantique prefecture issued a press release announcing that the state undertook the “resumption” of the airport.
Project ACIPA recalls that the work to Notre-Dame-des-Landes never started.
It denounces the ambiguity of this statement: it is a communication PR operation around a single tender for possible work. This tender comes in the continuity of administrative procedures that holders of the project (state and Vinci) are obliged to respect.
The holders of the project will also need work permits for clearing and clearing networks (water and electricity). They will also reactivate the license application to build with the studies and the adjoining public inquiries, which are the Vinci spring.
Finally, ACIPA notes that the State still has not filed a license application building for installations within its responsibility, such as the control tower.
Once again, Manuel Valls wants to impose starting work even though the President of the Republic, the only decision-maker, recently reaffirmed his respect that the legal procedures should carry on up ‘to their exhaustion.
The associations appealed remedies through the “Water Law” and “protected species” on 17 September 2015. The legal time referred to by François Hollande is far from exhausted.
The Prime Minister takes the risk, by such an announcement,  of activating a wind of citizen revolt on the eve of COP21, where France wants to be exemplary vis-à-vis other nations.
In full regional election campaign, he flouts democracy and all national and European environmental laws.
https://www.acipa-ndl.fr/actualites/communiques-de-presse/item/585-reprise-des-travaux-ou-operation-de-com

The original French at:

Bad translation from the original French:

From 5 to 8 November 2015 will be held in Turin, Italy, the final session of the singular trial before the Permanent Peoples’ Tribunal (TPP) regarding Great Unnecessary and Imposed projects in Europe and South America.

The public Turin trial judge the violations of democratic rights of entire populations, including national governments and supranational institutions (eg the European Union) require achieving the territories referred to as’ ‘major projects’ that impact heavily the environment, the fate of the territory, health and quality of life of current and future generations.

The trial comes in the wake of a complaint to the TPP in 2014 by the association “Controsservatorio Valsusa” (Against Osservatoire Valsusa). The complaint denounced the emblematic case of the railway line project new high-speed Lyon-Turin in the Susa Valley who now knows a permanent military occupation of the territory by the army and police.

The complaint, also signed by the mayors of this territory has the support of thousands of citizens and dozens of organizations and personalities from around the world such as the Italian Association of Democratic Lawyers, Noam Chomsky, Dario Fo, Luciano Gallino, Serge Latouche, Ken Loach, .. .

The TPP, accepting the complaint, wished to associate other similar cases whose promoters of existing projects currently in Italy, Europe and Mexico; Notre Dame des Landes is therefore associated with the complaint by filing a preliminary record, then a first testimony at the inaugural session of the TPP March 14, 2015 in Turin.

Our case has become emblematic in France, which led the visit of Secretary General of TPP, Gianni Tognoni M., came to investigate on the spot, before and during the gathering from July to Notre Dame.

Natural and legal persons prosecuted are, among others, project developers and building owners, the Italian Government, especially some officials, the European Parliament’s Committee on Petitions and the European Coordinator of the Mediterranean Corridor within the TEN-T (Trans-European Network – Transport ).

In the college of judges, are Mireillle Fanon-Mendes-France (France), and Philippe Texier (France). We are actively pursuing the preparation of this final session, by the production of additional documents. Our delegation, which will include Mr. Thomas Dubreuil, law attorney in charge of the environment NDDL folder to ACIPA and CEDPA, and Geneviève Coiffard-Grosdoy, representative of Attac association with opponents Coordination behalf GPII of the Coordination Group.

The trial of November will also examine cases of HS2 (high speed line opposition in the UK, Basque LGV, S21 (Stuttgart station Opposition) and Rosia Montana (opposition to operations cyanide a gold mine in Romania), and several cases in Latin America.

All these cases will be examined to reach a joint decision that will have ethical, moral, political value in the broadest sense.

The Permanent Peoples Tribunal in brief

The Permanent Peoples’ Tribunal, or TTP, is a tribunal of opinion, not power, which has a global reach. It is associational nature. There are present volunteer judges involved in all cases where national and international laws have proved unsuccessful in the defense of rights.
The TPP has to his credit 40 years of instructions and decisions for the protection of ethnic minorities discriminated against, multinational convictions with very polluting products, etc. …
It is the heir of the experience of the “Russell Tribunal”, founded in 1966 by Jean-Paul Sartre and Bertrand Russell to judge war crimes by the United States in Vietnam.
It was officially born in Bologna in June 1979. Without own seat, it is a meeting in which legally recognized personalities denounce acts they consider objectionable, based on international law.
Jurors rely advisory opinions to the jury that directs and mediates the “trial.”
The sentences have no binding effect, but the opinions expressed are meant to be based on the actual legislation and communicated to the authorities, circulate in the spheres of the UN.
The TPP intends to enforce ESCR (Economic social and cultural). The themes of the sessions also affects the problems posed by globalization, debt, major environmental risks (Amazon, Bhopal). Any movement victim of a rights violation proved can take his case to the PPT.
The original French at
https://www.acipa-ndl.fr/actualites/communiques-de-presse/item/587-notre-dame-des-landes-a-nouveau-devant-le-tribunal-permanent-des-peuples-a-turin-du-5-au-8-novembre

In 2008 plans to build a new airport for Nantes, 20 miles north of the city at Notre-Dame-des-Landes, were approved. The plan is to move the airport from its current site to the south of the city, Nantes Atlantique Airport, and build over farmland and wetlands, that are rich in wildlife and have good agriculture. The new “Aéroport du Grand Ouest” is intended to be a “gateway to western France” with up to 9 million passengers per year by 2050. For that tiny number, it wants two runways. It has been bitterly opposed for years, and while it was originally to open in 2014, work may now eventually start soon. Opponents have done everything they could to stop it, including huge occupations of parts of the site, scuffles with the authorities that sometimes turned unpleasant, a hunger strike, and recourse to legal challenges on European law. Finally it seems all legal avenues have been exhausted. The Prefecture of the Loire-Atlantic announced in effect that work on the airport will start, and a call for tenders has been launched. Compensation will have to be paid to those having their land expropriated, and environmental mitigation will have to be done – including protection of water voles. There are still people (zadistes) occupying shacks on part of the site, and they would have to be removed. Opponents do not believe any work can start yet. They say the airport is not needed, it is not consistent with climate targets, and the damage to farmland and habitats cannot be justified. . 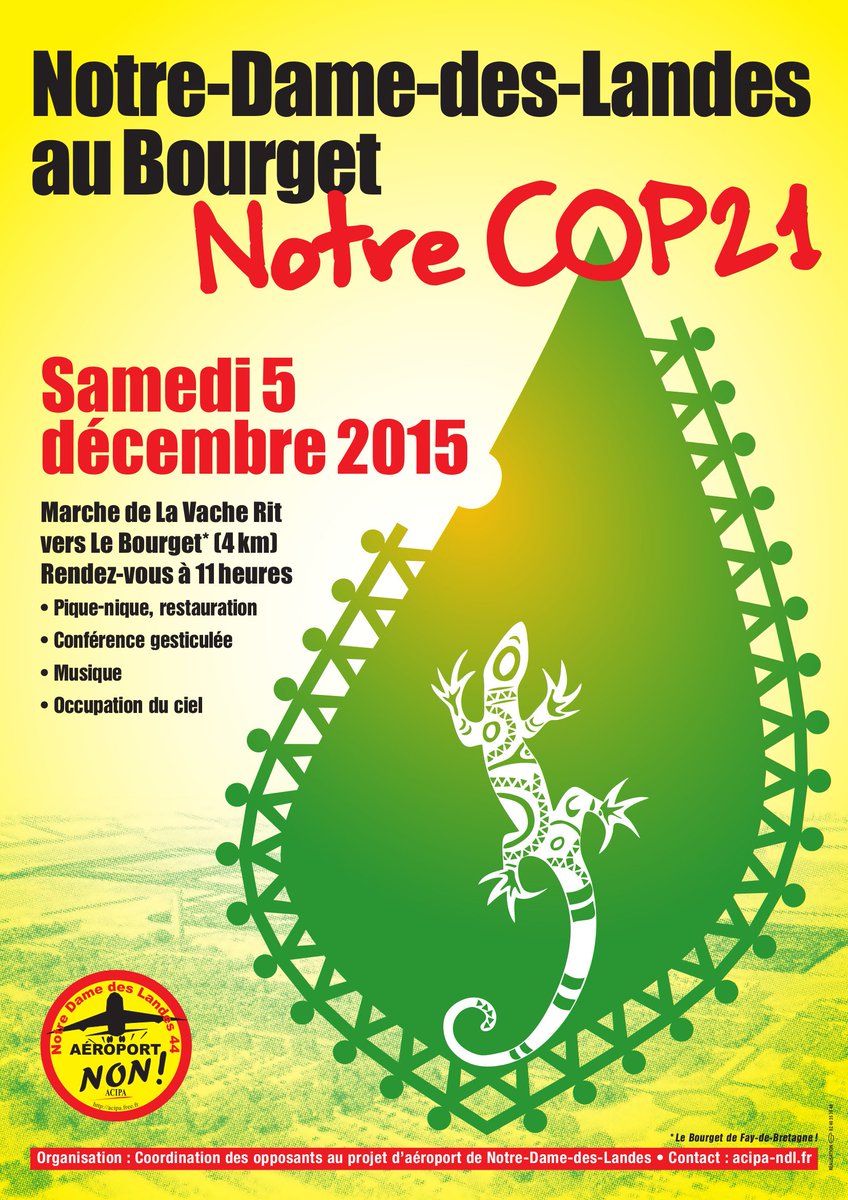