A ruling by the Supreme Court in April 2015 required the government to produce a comprehensive plan to meet air pollution limits by December. The government has now produced this. The intention is that it has to include low emission zones, congestion charging and other economic incentives. It is thought that due to the failure to meet European limits of harmful NOx gases, which are mostly caused by diesel traffic, there are up to 9,500 premature deaths each year in London alone. Under the government’s plan, “Clean Air Zones” will be introduced – by 2020 – in areas of Birmingham, Leeds, Nottingham, Derby and Southampton where pollution is most serious. However, though vehicles like old buses, taxis, coaches and lorries have to pay a charge to enter these zones – private passenger cars will not be charged. Also newer vehicles that meet the latest emission standards will not need to pay. Client Earth, the lawyers who brought the legal case against the UK government, for breaching the EU’s Air Quality Directive, said the plan falls far short of the action necessary to comply with the Supreme Court ruling, and they will make a legal challenge to force the government to take faster action to achieve legal pollution limits. “As soon as possible,” or by 2020, is not soon enough.
.
Tweet


DEFRA’s press release is at

Dozens of UK cities including London, Birmingham, Leeds, Liverpool, Cardiff and Edinburgh will still be in breach of EU limits on air pollution for at least the next five years, despite an air quality action plan issued by the government on Thursday.

The plan is a response to a supreme court ruling in April on the government’s failure to meet European limits of harmful NOx gases, which are mostly caused by diesel traffic and blamed for nearly 9,500 premature deaths each year in London alone.

But the blueprint for cutting NOx lets privately-owned passenger cars off the hook by making them exempt, and only includes so-called clean air zones for five cities, in addition to one already planned in London.

Alan Andrews, a lawyer for ClientEarth, the NGO which won the supreme court case, said: “These are better than the draft plans [published in September] but they’re still not good enough. They need to go much further and much faster, and we’ll be going back to court.”

He added: “The original deadline for compliance was 2010. The supreme court ordered plans to achieve compliance as soon as possible, yet the government is acting as if 2020 is somehow okay. Every year that goes by, thousands more people will die or be made seriously ill.”

Under the plan, clean air zones will be introduced in Birmingham, Leeds, Nottingham, Derby and Southampton by 2020. The owners of the dirtiest buses, coaches, lorries and taxis will have to pay a charge to enter the zones, but newer and cleaner models will be exempt.

However, privately-owned passenger cars, which make up 88% of the UK’s motor fleet , will also be exempt from paying a charge.

The plan projects that London will be in compliance by 2025 rather than 2030 as expected before. Leeds and Birmingham will meet the limits by 2020, instead of 2025 without the plans.

But the compliance date of 2020 for many cities – including Manchester, Cardiff and Edinburgh – remains unchanged by the plans.

Elizabeth Truss, environment secretary, said: “Our clean air zones are targeted on the largest vehicles, whilst not affecting car owners and minimising the impact on business.

“We want to ensure people can continue to drive into city centres and by targeting action at the most polluting coaches, taxis, buses and lorries we will encourage the use of cleaner vehicles.”

The UK has been in breach of EU limits on annual mean NOx concentrations since 2010 and pleaded for extensions. That led the NGO ClientEarth to bring a court case against the government which culminated in a unanimous verdict in the supreme court ordering a clean-up plan by the end of 2015.

The resulting plan today comes just days after it was revealed that the UK was lobbying against new European limits for carmakers on NOx. The government blames much of the UK’s pollution woes on the failure to introduce real world driving tests in Europe, but the UK has lobbied against those in Brussels.

A spokeswoman for the environment department could not explain why 88% of the UK motor fleet was being exempted, but said the focus was on targeting the oldest and most polluting vehicles.

The department said it expected 35 of 43 air quality zones to meet NOx limits by 2020, up from 28 under its earlier projections. “This will lead to significant benefits for the UK, including helping to avoid health impacts,” it said.

The government will be consulting with local authorities on the level of the fees charged to deter the dirtiest lorries, coaches and taxis ahead of the zones taking effect by 2020. 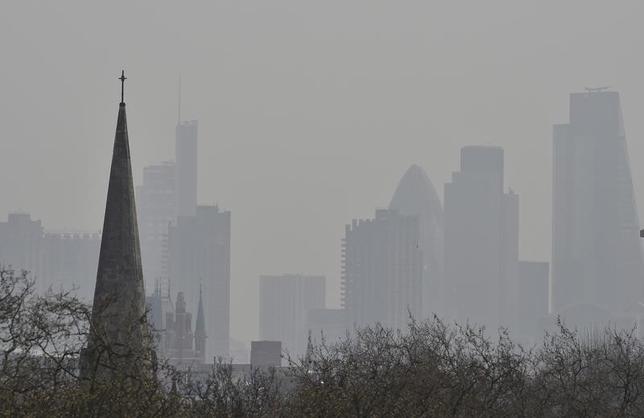 The City of London financial district is seen from Primrose Hill as high air pollution obscures the skyline over London April 10, 2015. REUTERS/Toby Melville

Britain will submit its final plan for improving air quality to the European Commission on Thursday after levels of the pollutant nitrogen dioxide, mostly from diesel vehicles, were found to have breached EU limits.

The UK Supreme Court earlier this year ordered the government to submit the new plans for fighting the harmful pollutant by late December.

Under the British government’s plan, “Clean Air Zones” will be introduced in areas of Birmingham, Leeds, Nottingham, Derby and Southampton where pollution is most serious by 2020, the department for environment, food and rural affairs (Defra) said.

Vehicles such as old buses, taxis, coaches and lorries have to pay a charge to enter these zones but private passenger cars will not be charged.

“Under government plans no private cars will be charged in these cities and newer vehicles that meet the latest emission standards will not need to pay,” Defra added in a statement.

Plans have already been announced to improve air quality in London by 2025, such as introducing an ultra-low emissions zone and retro-fitting buses and new taxis.

However, environmental law firm ClientEarth, which originally brought the case against the government for breaching the EU’s Air Quality Directive, said the plan falls far short of the action necessary to comply with the Supreme Court ruling.

“The government’s latest plan for clean air zones doesn’t tackle all pollution from passenger cars, one of the biggest sources of poor air quality, and fails to take action in dozens of other cities where people are breathing illegal levels of pollution,” said ClientEarth lawyer Alan Andrews.

ClientEarth added that it will make a legal challenge to force the government to take faster action to achieve legal pollution limits.

Nitrogen oxides reduce air quality and member states have been flouting EU limits on a range of pollutants associated with more than 400,000 premature deaths per year, according to European Commission data.

The Commission has begun 21 infringement proceedings against nations in breach of existing rules and has proposed more stringent legislation in the face of resistance from some governments.

The Supreme Court has ruled that the Government must produce a new action plan by the end of this year for bringing air pollution within legal limits. A decision to allow another Heathrow runway could be legally challenged unless the Government’s new plans are sufficiently ambitious to reduce emissions of a 2 runway airport below the legal limit – and also leave enough headroom to accommodate the negative impact of a 3rd runway. There is only pure speculation on how it could be achieved. The court ruling also suggests that the cost-benefit analysis for adding a runway will need to be revised, as the Government has previously claimed that complying with air quality law would be too expensive. And this does not only affect Heathrow, but Gatwick too. Gatwick is keen to claim it does not have a poor air quality problem. But EU regulations require not only that poor air quality must be improved but also that good air quality should be protected. A 2nd Gatwick runway would mean local air pollution hotspots, with a risk of breaching the legal limits. The Airports Commission has a duty to the public not to recommend a project that would significantly damage people’s health. It would also be a poor use of taxpayer’s money to make recommendations that invite a legal challenge.

The UK Supreme Court has quashed the Government’s ineffective plans to cut illegal levels of air pollution in Britain and ordered it to deliver new ones by the end of the year. The Supreme Court Justices were unanimous in their decision, saying: “The new Government, whatever its political complexion, should be left in no doubt as to the need for immediate action to address this issue.” This could have implications for a 3rd runway at Heathrow, as areas around the airport continue to be stubbornly above the EU legal limits. That is due both to air pollution from the planes in addition to the huge amount of traffic on the M4 and M25. In their verdict, 5 judges ordered the Secretary of State at DEFRA to consult on strict new air pollution plans that must be submitted to the European Commission by 31 December 2015. The EU Air Quality Directive demanded the UK brought pollution down to legal limits by 2010 or apply for an extension by 2015. But the government in 2011 said that a number of areas, including London, would be unable to comply by 2015 and instead argued the law allowed it to comply “as soon as possible”. The judgement marks a victory for the campaigning legal firm ClientEarth. HACAN commented: “This is a potential show-stopper as far as a 3rd runway is concerned.”

The UK Supreme Court has quashed the Government’s ineffective plans to cut illegal levels of air pollution in Britain and ordered it to deliver new ones by the end of the year.

The Supreme Court Justices were unanimous in their decision, handed down this morning, saying: “The new Government, whatever its political complexion, should be left in no doubt as to the need for immediate action to address this issue.”

The historic ruling is the culmination of a five year legal battle fought by ClientEarth for the right of British people to breathe clean air.

The ruling will save thousands of lives a year by forcing the Government to urgently clean up pollution from diesel vehicles, the main source of the illegal levels of nitrogen nioxide found in many of the UK’s towns and cities.

ClientEarth Lawyer Alan Andrews said: “Air pollution kills tens of thousands of people in this country every year. We brought our case because we have a right to breathe clean air and today the Supreme Court has upheld that right.

“This ruling will benefit everyone’s health but particularly children, older people and those with existing health conditions like asthma and heart and lung disease.

“The next Government, regardless of the political party or parties which take power, is now legally bound to take urgent action on this public health crisis. Before next week’s election all political parties need to make a clear commitment to policies which will deliver clean air and protect our health.”

The Supreme Court ruling means the Government must start work on a comprehensive plan to meet pollution limits as soon as possible. Among the measures that it must consider are low emission zones, congestion charging and other economic incentives.

ClientEarth is calling for action to clean up the worst polluting diesel vehicles, including through a national network of low emission zones.