Campaigners against Gatwick expansion have highlighted the extent of the devastation that a 2nd Gatwick runway would cause to important buildings of great British heritage value, as well as demand to local history and environment. Unveiling a new report, the groups say Gatwick’s own submission to the Airports Commission detailed 17 listed buildings which would be destroyed. These include some of Britain’s finest examples of medieval architecture. The launch of the report was held at Rowley, a former residence of Henry VIII’s fifth wife, Catherine Howard, which is among those “requiring removal”, according to airport plans. The new runway would require the irreversible loss of the last remnant of the ancient village of Lowfield Heath, which was recorded in the Domesday Book in 1068. The groups behind the new report are CPRE (Sussex, Surrey and Kent branches), the Woodland Trust, the GACC and CAGNE.  Duncan Leslie, from Hever, and Sir Charles Burrell from the Knepp Estate spoke about the impact of plane noise on their historic sites.  Bendon Sewill commented: “Gatwick seek to wallpaper over the sheer level of destruction it would cause to our British heritage.  This is a major stand against Gatwick on one of the historical sites that its proposal would destroy.  It would be far more damaging than HS2.”
.
Tweet

Biggest destruction of British heritage since the Blitz if Gatwick expands

The report is The Gatwick threat to heritage

Gatwick’s own submission to the Airports Commission detailed 17 listed buildings all heading for the chop* – some of Britain’s finest examples of medieval architecture – and the last remnant of the ancient village of Lowfield Heath which was recorded in the Domesday Book in 1068.  [ Reference * in Gatwick’s own submission https://www.gov.uk/government/uploads/system/uploads/attachment_data/file/368772/21_Appendix_A13_Place.pdf    See page 53 onwards.]

“Gatwick seek to wallpaper over the sheer level of destruction it would cause to our British heritage.  This is a major stand against Gatwick on one of the historical sites that its proposal would destroy.  It would be far more damaging than HS2.”

The planned development will result in the mass destruction of heritage sites, triple the amount which will be destroyed by the new HS2 rail link between London and the North.

“Gatwick Airport is an important economic contributor but we must also have respect for our local environment and heritage.

“I believe we can see a successful airport in harmony with the importance of maintaining countryside strategic gaps for the wider community good.

“For both economic and area environmental reasons I am convinced that Gatwick should not see runway expansion.”

15 hectares of ancient woodland which have stood undisturbed continuously since at least 1600 will also get the axe as new car parks and terminal buildings fill almost the entire space between the current airport and the town of Crawley. These complex ecosystems have taken hundreds, if not thousands, of years to establish and form a critical part of local history and biodiversity.

“Not only does the Gatwick runway involve demolishing 17 ancient buildings but the boundary of the airport would come to within a hundred yards of Crawley, a town with 110,000 inhabitants.  All the problems of noise and health which apply at Heathrow would be equally bad at Crawley.  Our infrastructure is already almost at a standstill; we have the highest level of asthma in children.  A second runway would be intolerable.”

In the midst of a housing crisis which is crippling communities across the UK, Gatwick are proposing to double their airport putting impossible demands on the local housing stock. West Sussex County Council’s consultants estimate that an additional 40,000 new houses will be needed to house the workers needed to fill the posts at an expanded Gatwick, representing the biggest risk to local countryside.

At full capacity, an expanded Gatwick would operate almost twice as many flights. They’ve committed to using both runways all day every day seven days a week, offering no respite for local communities and threatening areas of outstanding natural beauty such as the South Downs National Park.

“The Conservative Party leadership candidates need to make it clear: they won’t betray the Home Counties, destroy our livelihoods and be responsible for the biggest destruction of British heritage since the Blitz.

Expansion at Gatwick won’t just be a temporary disruption, it would see the irreversible destruction of Britain’s heritage and the quality of life for hundreds of thousands of people in Kent, Surrey and Sussex. The candidates have a duty to stand up to Gatwick and protect the lifestyle and culture for our future generations of years to come.”

“What must be recognised is that ‘environmental impact’ should not only be used, as has consistently been the case as part of the expansion debate, as a term to refer to noise and vibration in relation to people and their homes, with damage to the natural environment seemingly just a secondary complication. Any risk of loss or damage to the natural environment, and especially to irreplaceable habitats like ancient woodland or ancient trees, must be taken just as seriously, and every possible avenue investigated to avoid it if we are to adapt to threats such as climate change, and so that communities can exercise their right to a healthy lifestyle…….remembering that this is not just about the footprint of a new runway, but all the surrounding development likely to be required that will add more strain on the UK’s natural environment in the long term.”

Keith Taylor, MEP for the South East,was unable to attend the event at Rowley due to emergency debates in the European Parliament, but commented :  “The case for airport expansion is built on sand.  It is, and always has been, a myth that the UK faces an airport capacity crisis; we already fly more than any other country.  Despite this, the airport and the pro-expansion lobby are spending millions of pounds trying to convince people otherwise.  All but one UK airport is under-capacity and demand is likely to fall, rather than rise, following Britain’s decision to leave the EU.

We cannot hope to meet vital climate change targets while building major new runways – the two policies are wholly incompatible.  Gatwick expansion not only threatens the South East with more noise, more traffic, and more pollution but also directly threatens the unprecedented demolition of our heritage and countryside.”

The report is at

Building a second runway at Gatwick Airport would be “the biggest destruction of British heritage since the Blitz”, campaigners have said.

The Sussex branch of the Campaign to Protect Rural England (CPRE) warned 17 historic buildings – including several Grade II-listed ones – were threatened.

A former residence of Henry VIII’s fifth wife is among those “requiring removal”, according to airport plans.

Gatwick said many buildings would be retained or relocated.

A decision on additional runway capacity has been put back until “at least October” while the Conservative leadership race takes place.

Sally Pavey, of CPRE Sussex, said expansion “would see irreversible destruction of Britain’s heritage and quality of life for hundreds of thousands of people in Kent, Surrey and Sussex”.

She called on the Tory leadership candidates to rule out expansion and “not betray the Home Counties” if they are chosen.

“The candidates have a duty to stand up to Gatwick and protect the lifestyle and culture for our future generations,” she said.

Several conservation and campaign groups are to meet with a local MP at Grade II-listed Rowley House – one of the buildings identified in runway design documentsfor “complete removal” or demolition – to oppose the plans.

The 16th Century farmhouse was once owned by the Culpeper family, a member of whom was Joyce Culpeper. Her daughter Catherine Howard – Henry VIII’s fifth wife – was beheaded in 1542.

Henry Smith, MP for Crawley, said he was “convinced Gatwick should not see runway expansion” for both economic and environmental reasons.

The Woodland Trust has also backed the campaign, having previously warned“irreplaceable habitat” would be destroyed.

Gatwick Airport said many of the buildings identified in its plans were timber-framed, making them “viable to move and relist” at new locations.

A spokesman said: “If we build a new runway everything possible will be done to retain listed buildings within the scheme, or use experienced experts to relocate them to suitable new sites nearby.

“We have a good track record when it comes to managing our local environment. Gatwick has been referred to as the airport in the countryside and we will ensure that it stays that way.”

Known as “The Beehive”, the circular building will remain in its original location.

The airport said the building was “important not only in the history of British aviation but also in terms of world airport design”. 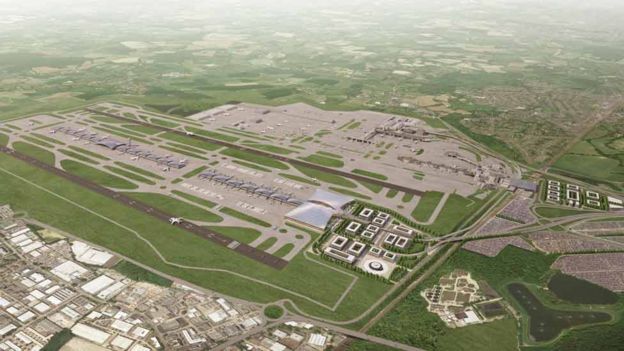 Image copyright  GATWICK AIRPORT. Gatwick released new images of what an expanded airport would look like