Chairman of CCC writes to BEIS to query why DfT appears to no longer use the 37.5MtCO2 cap for UK aviation

The Committee on Climate Change (CCC) has been giving the UK government the advice, since 2009 (when government was trying to get a 3rd Heathrow runway) that UK aviation should emit no more CO2 than its level in 2005 (which was 37.5MtCO2) per year by 2050. This has tacitly been accepted by government since then. But the DfT “sensitivities” document put out on 25th October, said that this cap on UK aviation carbon was “unrealistic” and its assessments were only now  looking at the carbon traded  option. That means UK aviation CO2 well above the target.  The Chairman of the CCC, Lord Deben, has now written to Greg Clark, Sec of State at BEIS (now in charge of UK carbon emissions, since DECC was scrapped) to point out that the DfT seems to no longer see the constraint of 37.5MtCO2 as being important, and its forecasts and business assumptions are all now based on higher CO2 emissions by UK aviation. Lord Deben says: “If emissions from aviation are now anticipated to be higher than 2005 levels, then all other sectors would have to prepare for correspondingly higher emissions reductions in 2050.”  Even if UK aviation stuck at 37.5Mt CO2 by 2050, this would mean “an 85% reduction in emissions in all to her sectors”. The CCC does not have confidence that cuts of over 85% could be made. That implies the  UK would miss its legally binding CO2 target.
.
Tweet

Letter: Department for Transport’s assessment of the case for a third runway at Heathrow 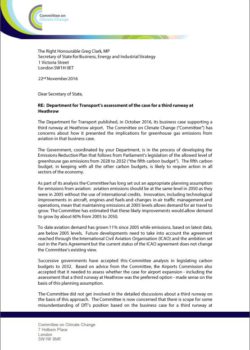 The Chairman of the Committee on Climate Change (CCC), Lord Deben, has written to the Secretary of State for Business, Energy and Industrial Strategy, the Rt Hon Greg Clark MP, regarding the Department for Transport’s (DfT) assessment of the case for a third runway at Heathrow airport.

The letter sets out the Committee’s concerns about how the DfT business case has presented the implications for UK greenhouse gas emissions from aviation.

Letter: Department for Transport’s assessment of the case for a third runway at Heathrow

This letter includes these comments:

This is where the DfT states that using the carbon-capped figures is “unrealistic” and so they are only looking at the carbon traded figures (which allow for Heathrow expansion, and aviation emissions above the target of 37.5MtCO2 that they have been recommended, by the CCC (Committee on Climate Change) since 2009.

“1.12 The AC’s approach to modelling the carbon-capped scenario uses carbon price assumptions that are higher than the central values published by the Department of Energy and Climate Change (DECC) for appraisal. The carbon-capped scenario is helpful for understanding the varying effects of constraining aviation CO2 emissions on aviation demand and the impact on the case for airport expansion, but was described by the AC as “unrealistic in future policy terms”. ”

In other words it can’t be done..

What answers has the Government found to the environmental hurdles facing a third runway?

As AEF has consistently pointed out, and as the Committee on Climate Change reminded Government today, there is no plan for delivering the aviation emissions limit required to deliver the Climate Change Act either with or without a new runway.

The last time we had a government supporting runway expansion, it specified that this would be conditional on the sector’s CO2 emissions being on course not to exceed 37.5 Mt by 2050, in line with the CCC’s advice. Today’s announcement included no such commitment, instead making vague references to the global carbon offsetting scheme for aviation agreed this month, and to potential efficiencies arising from better air traffic management – both measures that are (effectively) already taken into account in the CCC’s modelling, and that won’t bring us anywhere near to achieving the minimum level of ambition required under UK law.

So what does the Government have to say about how the CCC’s recommendation will be met? The answer is deeply buried in a technical paper released alongside the announcement which states that the Airports Commission’s carbon-capped scenario “is helpful for understanding the varying effects of constraining aviation CO2 emissions on aviation demand and the impact on the case for airport expansion but was described by the AC as ‘unrealistic in future policy terms’”. In other words it can’t be done.

Analysis by Carbon Brief: Aviation to consume half of UK’s 1.5C carbon budget by 2050