Heathrow timetable – it will not submit its DCO till end of 2020 at earliest; final decision might be early 2022

The earliest the Transport Secretary (currently Grant Shapps) could make a decision on the 3rd runway would be the end of 2021, or perhaps early 2022. The Standard said it might be the end of 2020. That is not possible.  Heathrow hopes to submit its DCO (Development Consent Order) to the Planning Inspectorate at the end of 2020, or it could be delayed into 2021 if they run into problems meeting the requirements of the Airports National Policy Statement.  The Planning Inspectorate will launch an inquiry which takes 9 months and then the Inspector will take 3 months to make a recommendation to the Secretary of State – who then gets to make a decision. There is no mechanism for the Secretary of State to make a decision before the conclusion of the planning inquiry unless the government enacts a review under section 6 of the Planning Act 2008 if it feels “there has been a significant change in any circumstances on the basis of which any of the policies set out in the statement was decided.”
.
Tweet

The No 3rd Runway Coalition have clarified the timetable for possible Heathrow expansion. There was an inaccurate article in the Standard recently, that got it all wrong.   Below is a statement from the Coalition: 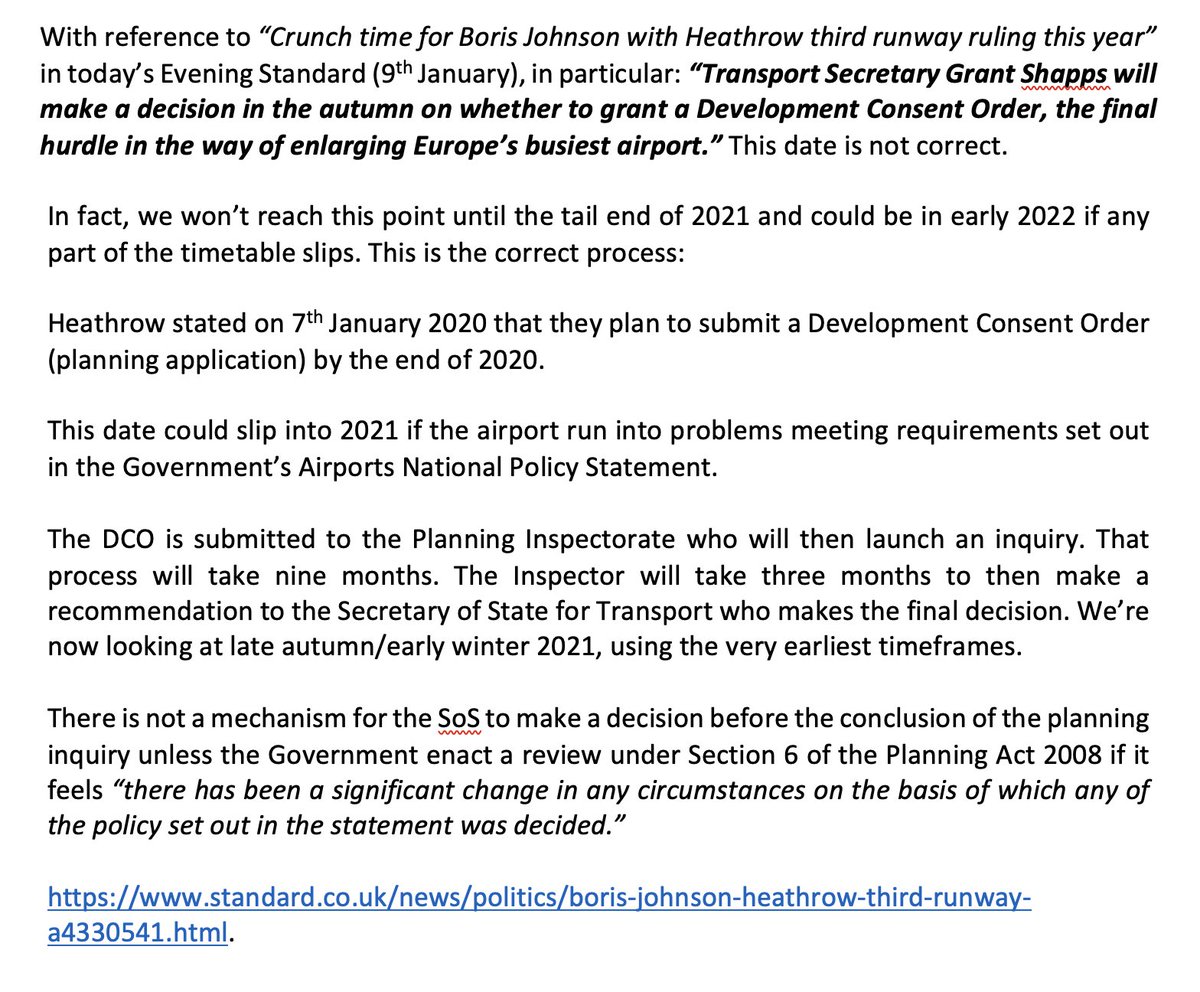 A decision to abandon the runway could be made earlier than 2022, if the combined economic problems and environmental problems cause the government to re-think.

Due to the delays caused by the CAA ruling, the runway will not be completed by 2026, as Heathrow had hoped. The likely date would be 2029, at the earliest – removing much of the theoretical economic benefit that might have been produced by the runway being built quickly.

Heathrow’s timetable for its 3rd runway faces further delay after CAA said it would only approve £1.6 billion of spending before the DCO is approved. Not the £3 billion Heathrow wants.  In a new CAA consultation document released on Thursday, they say this would mean a delay of about a year to the 2026 scheduled opening of Heathrow’s runway, based on Heathrow’s estimates. However, Heathrow said the CAA’s proposal would delay the completion of the runway by up to 3 years. ie. it would not open till 2029 (Heathrow says “between early 2028 and late 2029….).  The delayed opening date means the alleged economic benefit to the UK is far lower than currently estimated. The Transport Select Cttee report in March 2018 on the Airports NPS said the maximum benefit of the runway to the whole of the UK over 60 years would be +£3.3 billion. They said that a delay of two years, from opening in 2026 to 2028 would mean a loss of £16.3 in economic benefit to the UK. That means the runway would now cause a considerable economic loss to the country.  On this basis alone there should be a review of the Airports NPS, and rethink by government on Heathrow.