So far the only scheme that might be used globally, to try to reduce the CO2 emissions of aviation, is the UN’s CORSIA. But it is wholly inadequate for the task. Now an assessment by the German DW shows that the scheme would not even require airlines to offset their CO2 emissions for another 6 years, and the cost will be much to small to have any deterrent effect.  The CORSIA scheme finally launched this month, with the aim of stopping the total emissions of aviation from rising about their level in 2019. Critics say the scheme is unambitious and ineffective. The baseline above which offsets must be paid is so high that it will take until 2026 before any airline has to purchase any.  Magdalena Heuwieser, co-founder of the Stay Grounded activist group: “CORSIA is a wreck that is too broken to fix.  It is even worse than doing nothing because it distracts from real solutions.” That is because it could delay investments in the technologies needed to decarbonise flights.  A lot of smaller countries, with new aviation sectors, and not required to be part of CORSIA.  Many large countries might join, on a voluntary basis, before 2027.  Others will only join then.
.
Tweet

A new UN-brokered deal for aviation will not require airlines to offset flight emissions for another six years and will cost them less than 1% of operating costs by 2035, a DW analysis has found.

When Austrian judges let Vienna Airport build a third runway in 2018 — overruling a lower court that had previously blocked the expansion on environmental grounds — international climate agreements did not stand in their way. World leaders had not pledged to limit air traffic, the airport argued, but rather to grow it in a “climate-neutral” way.

The scheme they cited might not achieve even that.

CORSIA, the flagship emissions deal that launched this month, was brokered by the UN’s International Civil Aviation Organization (ICAO) to stop the sector’s net greenhouse gas emissions from rising. But instead of tackling the growing number of flights between countries or capping their emissions, it forces airlines to buy credits that offset the rise in CO2 output above 2019 levels.

Climate activists and some researchers say the scheme is unambitious, ineffective and could even harm efforts to cut emissions, which plunged last year because of the COVID-19 pandemic. The baseline above which offsets must be paid is so high that it will take until 2026 before any airline has to purchase one, a DW analysis has found.

“CORSIA is a wreck that is too broken to fix,” said Magdalena Heuwieser, co-founder of the Stay Grounded activist group, who protested the new runway at Vienna Airport. “It is even worse than doing nothing because it distracts from real solutions.”

Using offsets as a “safety valve” can delay investments in the technologies needed to decarbonize flights, said Dan Rutherford of the International Council on Clean Transportation (ICCT), an environmental research group, who provided emissions forecasts for the DW analysis. “We’re starting to see fuel providers and airlines make this same argument.”

CORSIA — the “Carbon Offsetting and Reduction Scheme for International Aviation” — is the world’s biggest attempt to make flying green. Planes are responsible for about 2.5% of carbon dioxide emissions and release other gases and water vapor that, at high altitudes, heat the planet even more.

The idea behind the scheme is to let the world reap the benefits of global travel and tourism without hurting the planet more than it currently does.

Flying is one of the top sources of emissions for people in rich countries, along with driving cars and eating meat, and is projected to boom as incomes rise, particularly across Asia. But unlike similarly polluting activities, the technology for clean flying does not yet exist. There are no airline equivalents of Tesla and Oatly, which make electric cars and plant-based milks. Trains cannot satisfy the demand to cross continents and oceans.

Instead, the ICAO — the UN body responsible for international flight emissions — is banking on the CORSIA scheme, along with low-carbon fuels and innovations in plane design and air traffic management, to keep net emissions stable as the sector grows.

The objective of CORSIA is to complement these emissions reductions, “some of which are already happening,” an ICAO spokesperson said. The amount of offsetting that is required depends on “how quickly and effectively progress can be achieved on one hand, and how quickly global air connectivity recovers on the other.” 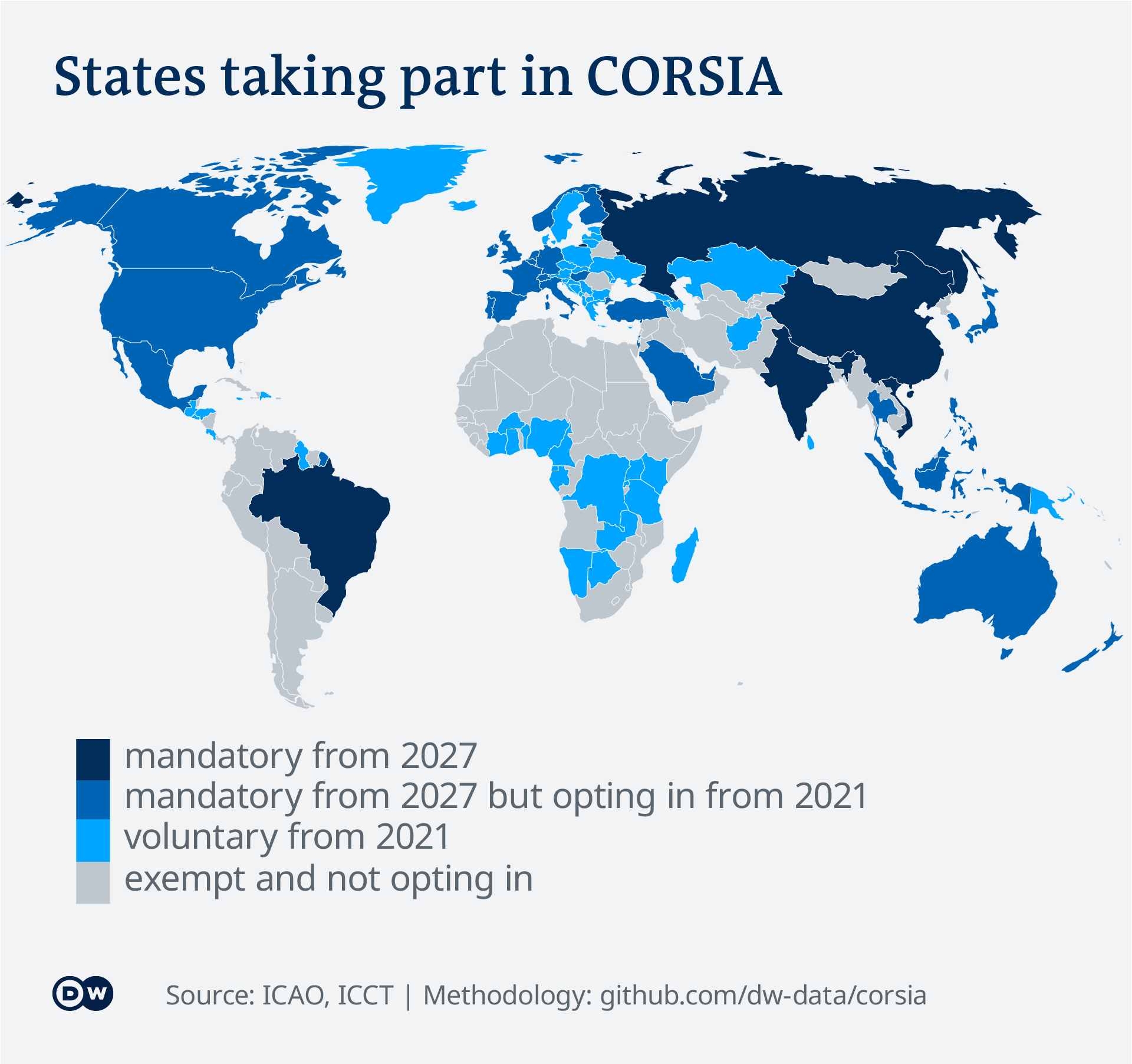 How does CORSIA offset CO2 emissions?

At its simplest, CORSIA means that airlines must buy credits to offset the emissions from their flights. These offsets are used to fund climate-friendly projects like planting trees and building solar panels, often in Asia, Africa and South America.

The scheme, which is currently voluntary, will apply to all ICAO member states after 2027. It does not make airlines offset emissions from domestic flights, which make up a third of aviation emissions but fall outside the ICAO’s remit, or include the owners of private jets. Some states with little air travel are also exempt. 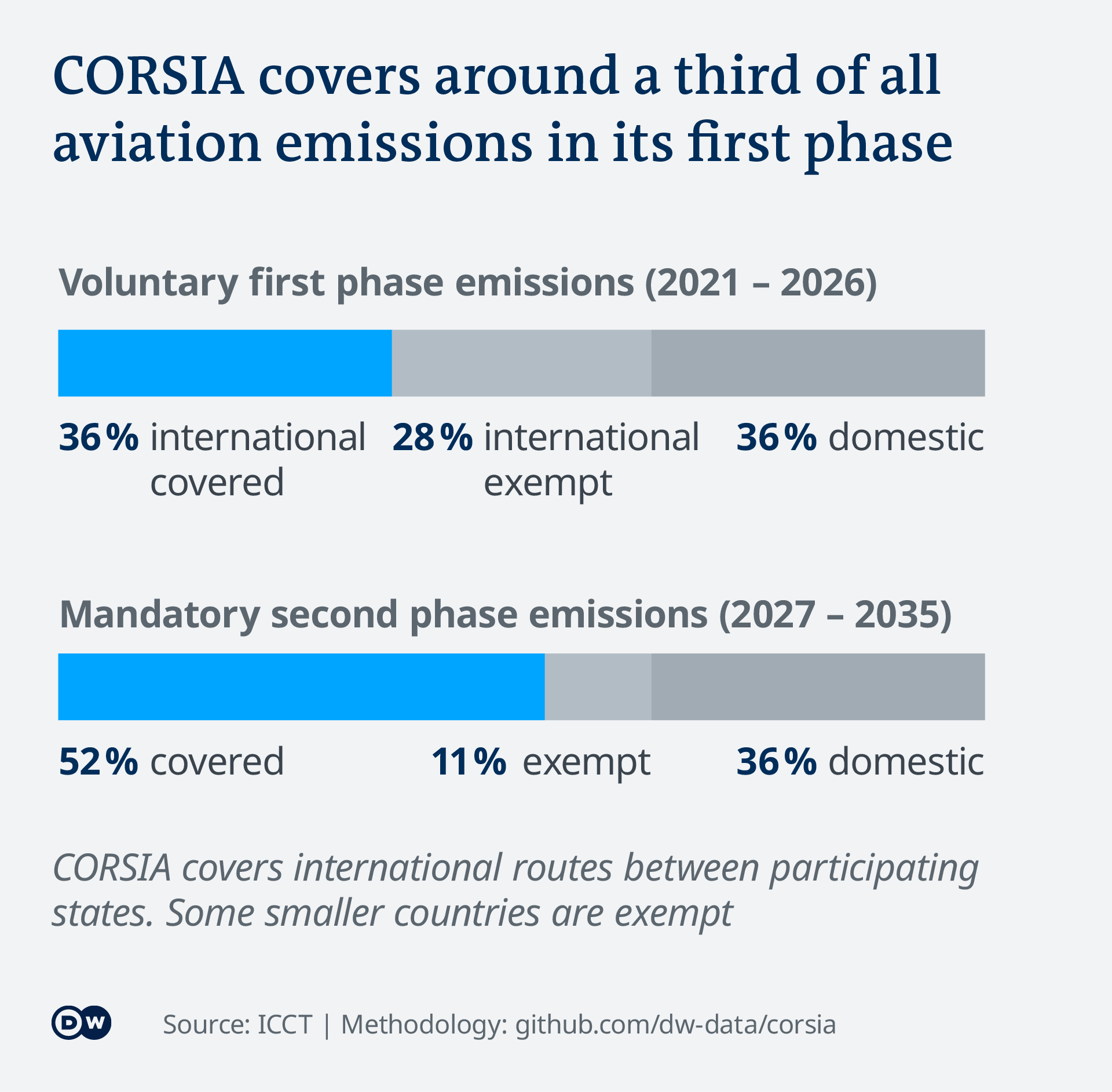 Offsets are a popular tool to show progress toward net-zero emissions targets because they are cheap and let those who buy them continue polluting.

But they often fail to live up to their promises.

A study for the European Commission in 2016 found that 85% of the projects in the Clean Development Mechanism, one of the main offset programs approved by CORSIA, were overestimating the greenhouse gas emissions they saved. A 2019 investigation by the US investigative journalism outlet ProPublica uncovered projects in Cambodia where forests protected by carbon offset schemes had, in fact, been chopped down.

If an airline were to plant 100 acres of forest that were later burned by a wildfire, then “boom, all that carbon that’s been offset, that’s been paid for, is gone,” said Ryan Katz-Rosene, a political scientist at the University of Ottawa, in Canada, who researches environmental policy. “Empirically, they [offsets] don’t seem to hold water, at least most of the time.”

A report by the NewClimate Institute for the German Environment Agency in 2019 found that more than 80% of potential offset projects in four programs used by CORSIA were overstating their impact because they would have taken place whether the credits were sold or not. The ICAO later limited its eligible projects for the pilot phase to exclude those that started crediting before 2016. It also rejected several applications from offset programs that did not meet the standards of its technical advisers.

“While they may offer customers some peace of mind, traditional carbon offsets do almost nothing to tackle the emissions from flying,” said United Airlines CEO Scott Kirby, in a LinkedIn post in December pledging to fully cut the company’s greenhouse gas emissions by 2050. “And, more importantly, they simply don’t meet the scale of this global challenge.”

What is the CORSIA baseline?

The drop in air traffic from the COVID-19 pandemic has made the scheme weaker.

Originally, airlines were meant to offset emissions above a baseline that averaged their emissions from 2019 and 2020. But after lockdowns last year grounded planes and shuttered hotels, the industry argued that including 2020 in the baseline would cost too much because airlines would be forced to buy more offsets.

The ICAO agreed. In June, they excluded 2020 from the baseline until at least 2023, saying that not accounting for the hit to demand caused by the pandemic would “create an inappropriate economic burden to airplane operators.”

But a DW analysis based on data by ICCT shows that projected growth in demand and fuel efficiency means that airlines are unlikely to buy any offsets for the next 5 years, even if the industry recovers faster than it expects.

How much does it cost to offset CO2?

The ICAO said updated figures on the cost and quantity of CORSIA offsets were unavailable because of the rapidly changing situation. But even with this uncertainty, the cost to airlines will be negligible. ICAO’s official CORSIA FAQ states that “airlines have managed to cope with oil price volatility more than 15 times the size of the estimated offsetting cost.”

Today, offsetting a ton of CO2 under CORSIA costs less than $1. Experts from ICCT and Ecosystem Marketplace, an NGO focused on carbon markets, told DW that prices might end up anywhere between 70 cents and $12 by 2035. By comparison, Atmosfair, a German nonprofit that lets fliers voluntarily offset their emissions, charges consumers €23 ($28) per ton.

That means even with the original, higher CORSIA baseline, offsets would make up less than 1% of airlines’ 2019 operating costs by 2035.

Prices that low mean the scheme offers little incentive to lower emissions. It might even harm airlines who want to improve, said Rutherford, from the ICCT, because their prices could be undercut by competitors who buy cheap offsets instead.

Who gets to fly?

At the heart of the criticism of CORSIA is a simple question: If flying can’t yet be done cleanly, should more and more people keep boarding planes?

The people who fly regularly are those least affected by climate change. A study published in the journal Global Environmental Change in November found that 1% of the world population, mostly in rich countries, emits 50% of CO2 from commercial aviation.

That disparity also exists within rich countries, said Stefan Gössling, a professor of sustainable tourism at the University of Lund, in Sweden, who co-authored the study. “Even in countries like Germany, you will find that just a third of the population is actually flying and the large majority is not.”

Experts are weighing different solutions to bring down emissions from flights. One would be for airlines to invest heavily in research to electrify planes and replace jet fuels with hydrogen. Another would be for governments to stop subsidizing air travel, bring in a carbon tax to reflect the true cost of flying and introduce a quota on low-carbon fuels that rises each year.

They could also add levies on frequent fliers.

“We need things that really turn the global economy into a zero-carbon economy,” said Gössling.

For data, code and methodology behind this analysis, see this GitHub repository. You can read more stories from DW’s data team here. https://www.dw.com/data

An earlier version of this article incorrectly stated that the ICAO tightened its criteria for offsets after publication of a report by the NewClimate Institute. In fact, its eligibility criteria stayed the same, but it limited the number of projects by excluding older ones and rejecting applications from offset programs that did not meet its standards.

turns spotlight on Bank of England‘s loan support to high-carbon activities. British Airways and easyJet have both benefited from Bank of England’s corporate bailout scheme during the pandemic