After years of cheap carbon allowances, price has doubled from around €25 to around €50 in the past 6 months

Airlines flying within Europe have to pay for their carbon emissions, through the Emissions Trading System (ETS). They have to buy carbon allowances, for the carbon emitted. Until 2020, the price of those allowances did not rise beyond about €25. Before that, till around 2018 it was more like €8 per tonne. But there has been a sharp rise in the price in the past 6 months or so, reaching €56 recently and now being around €49.  This is not what airlines like, as for other carbon intensive sectors in Europe, they must buy the tradable credits to cover the amount they pollute under parallel emissions systems in both the UK and the EU. The nascent UK carbon trading system, which launched this month, started trading at higher prices, of above £50 a tonne.  The higher prices hit the dirt-cheap airlines hardest, with their low ticket prices – Ryanair, easyJet and Wizz Air have been hit particularly hard as almost all their flights are in Europe or the UK, requiring carbon allowance payments.  Traders and market participants expect the price of carbon to keep rising as net zero pledges of governments and corporates become more ambitious.
.
Tweet

The price of carbon

Data from an article in the Conversation 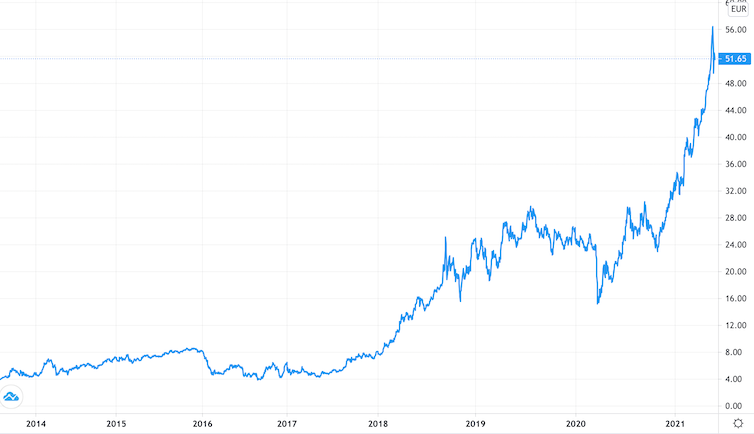 Carbon allowance prices have been on record breaking rally

Carbon schemes have hit Ryanair, easyJet and Wizz Air hard as they only cover emissions on European flights where they mainly operate

A sharp rise in the cost of polluting in Europe risks undermining airlines’ efforts to repair their balance sheets following the damage caused by Covid-19.

The cost of purchasing carbon allowances under the EU’s emissions trading system, ETS, has been on a record breaking rally, with prices more than doubling to above €50 a tonne compared with pre-pandemic levels.

That presents a problem for airlines in the region, which like other carbon intensive sectors must buy the tradable credits to cover the amount they pollute under parallel emissions systems in both the UK and the EU.

The nascent UK system, which launched this month, started trading at higher prices, of above £50 a tonne.

Low-cost carriers including Ryanair, easyJet and Wizz Air have been hit particularly hard as the schemes only cover emissions on flights in Europe and the UK where they do nearly all their flying.

“There’s no getting away from the fact that the carbon price is going through the roof and these guys are exposed to that,” said Deutsche Bank analyst Jaime Rowbotham.

Disclosure around emissions trading and hedging strategies are patchy, but Rowbotham estimates Ryanair, easyJet and Wizz will between them pay more than €600m in carbon costs in their 2023 financial years, up from about €330m before the crisis hit.

Airlines are given an annual set of free credits, and must purchase the remainder to cover the rest of their emissions. Airlines have carried so few passengers during the pandemic that some free credits remain unused.

They receive free credits to cover around half of their emissions at pre-pandemic levels.

The problem is likely to persist as traders and market participants expect the price of carbon to keep rising as net zero pledges of governments and corporates become more ambitious and high profile.

It has prompted several airlines to begin hedging credits in the same way as they do jet fuel in an effort to lock in lower prices.

Ryanair has disclosed it has locked in credits at €25 a tonne, which it will use through to its 2023 financial year, although it expects costs to rise after that date.

The carrier’s director of sustainability Thomas Fowler said the cost is a “tax on EU traffic”, adding that flights operating outside of Europe should also be included.

“Our view on it is that aviation as a whole has to do its job to reduce its carbon footprint, not intra-EU traffic,” he said.

Proceeds should also be reinvested into the industry to fund sustainable fuels to help airlines cut their environmental footprint, he said.

Both the EU and UK are planning to reduce the total number of allowances in their trading schemes as well as the number given out for free over the next decade, which is expected to push up the price of the credits further.

“On carbon prices, it’s clear that ETS compliance is making its way into the top three categories of airline costs, depending on how operators hedge,” said Laurent Donceel, senior policy director at lobby group Airlines for Europe.

Airlines will eventually want to pass these rising costs on to passengers, but this will be hard as they aim to stimulate demand by lowering prices as they emerge from the pandemic, said Alexander Paterson, an analyst at Peel Hunt.

“They are selling ahead at prices that may not reflect the actual costs they incur if they use the credits they have and need to buy more at €50 plus. This is a problem really for faster growing airlines,” he said.

But some airlines will now consider whether the more recent €50 threshold “is the bottom of the future price,” he said.