Complaints have risen from 75 during November 2010, to 480 in November 2011 once the trail started. During the trial dual use of both runways can be deployed when a plane faces a 10-minute wait to land or take off and if 30% of all flights are delayed by more than 15 minutes. Before the trial, the average time delay for flights was 12 minutes. The first trial finishes on 29 February while the next will run from 1 July 2012 until 30 September – coinciding with the Olympics. 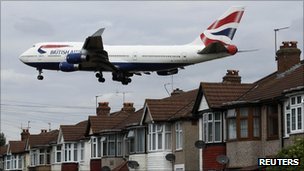 BAA warned that communities may lose their respite periods

Complaints about noise from planes at Heathrow Airport have risen more than six-fold during a trial changing the way its runways are used.

The scheme, started in November, has made it easier to for planes to use the airport’s two runways simultaneously.

There were 480 complaints in the first month of the trial, compared with 75 during November 2010

“BAA has worked to maintain an open dialogue with local residents on the trial,” the airport operator said.

“After the first part of the trial is completed on 29 February, we will be able to share more findings and have a greater understanding of the impact of the trial on local communities,” it added.

When the trial began, BAA has warned that communities may lose their respite periods.

Previously the runways were restricted to take-off or landing and switch each afternoon, except in an emergency, to give residents respite from the noise.

Under the changes, dual use of the runways can be deployed when a plane faces a 10-minute wait to land or take off and if 30% of all flights are delayed by more than 15 minutes.

Before the trial, the average time delay for flights at the west London airport was 12 minutes.

BAA insisted the number of flights at Heathrow would remain capped at 480,000 aircraft movements a year.

The first trial finishes on 29 February while a second will run from 1 July 2012 until 30 September – coinciding with the London Olympics.

The trial was recommended by the Department for Transport and will be overseen by the Civil Aviation Authority.

Data is being produced on a daily and monthly basis.  Daily data reports are available by clicking the link here http://heathrowtrial.com. A report will also be produced at the end of the trial.

Most of the time at Heathrow one runway is used for landings, and one runway for departures. When the build-up of arriving aircraft results in severe delays, Air Traffic Control is allowed to land aircraft on both runways. This is known as Tactically Enhanced Arrivals Mode (TEAM).

BAA produce extensive data for each day of the trial, with details of how many flights landed, took off etc  and including the number of complaints.

People living under Heathrow flight paths face increased noise after the introduction of new runway rules. BAA is to trial a scheme allowing the use of both runways simultaneously from July to Sept 2012. Currently, those living under the flight path have a respite from noise when the runways alternate at 3pm. Under the trial, which will also run from November to February, the threshold for triggering emergency dual use of the runways will be lowered.  Residents could face increased noise from losing some of their respite periods.   More details …..