China signed an agreement with Germany for 50 Airbus planes worth up to $4 billion during Angela Merkel’s visit to Beijing. This is the first significant order since a dispute over the ETS. The dispute between Beijing and the EU had allegedly interrupted earlier deals worth up to $14 billion. The Chinese news agency said China’s ICBC Leasing and Airbus, whose parent company is Franco-German-led aerospace group EADS, signed the deal for 50 Airbus A320-family planes. China regularly orders aircraft in large batches timed to coincide with high-level contacts with US or EU leaders, but this deal apparently fell short of European expectations of a 100-plane order.  Airbus and Chinese authorities also signed a $1.6 billion deal to extend an Airbus A320 assembly line at Tianjin.  China continues to block the purchase of some 35 larger Airbus aircraft to protest against the ETS. 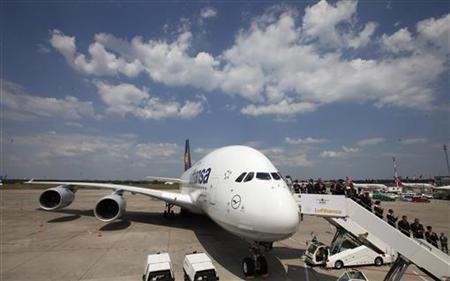 China signed an agreement with Germany for 50 Airbus planes worth up to $4 billion during Chancellor Angela Merkel’s visit to Beijing on Thursday, the first significant order since a dispute between Beijing and Europe over emissions trading.

The dispute between Beijing and the European Union had interrupted earlier deals worth up to $14 billion.

Xinhua put the value of the deal at $3.5 billion but at published list prices, the deal could be worth more than $4 billion.

China regularly orders aircraft in large batches timed to coincide with high-level contacts with U.S. or European leaders, but the deal fell short of European expectations of a 100-plane order circulating on the eve of Merkel’s trip.

Airbus insisted it was satisfied with the deal.

“In the current economic environment every deal is a good deal. What counts is: aviation is and remains a growth industry, with Asia and China being significant drivers,” a company spokesman said.

Officials said Airbus and Chinese authorities had also signed a $1.6 billion framework deal to extend an Airbus A320 assembly line at Tianjin near Beijing.

Merkel is due to visit Tianjin where Airbus has just finished assembling the 100th passenger jet pieced together from parts shipped from Europe since 2009, under an agreement that runs out in 2016.

Short-range aircraft such as the A320 have been spared any fallout from a recent row between China and the European Union over airline emissions as China seeks to meet domestic demand and promote skills required for its own fledgling aircraft industry.

China continues however to block the purchase of some 35 larger Airbus aircraft to protest against EU plans to enforce a carbon reduction scheme that opposing nations deem unfair.

Airbus has a 48 percent market share against Boeing in China, with the world’s second largest economy making up 20 percent of its worldwide deliveries.

Airbus estimates China will need 4,270 new passenger and cargo aircraft in the next 20 years, dominated by narrow body aircraft like the A320 or its U.S. rival Boeing’s (BA.N) 737.

China aims to enter the jet market’s largest segment with its Comac C919 jetliner from 2016, but is expected to remain a significant importer of Western aircraft for decades.

Despite the Chinese deal and a Philippines order earlier this week, Airbus lags Boeing in sales so far this year and is expected to lose its place at the top of the industry’s rankings as Boeing enjoys a resurgence following industrial delays.

June 12, 2012    Chinese airlines will refuse to submit carbon emissions data to the EU by this week’s deadline. This was extended from 31st March. The airlines say they are unanimous on this. Chinese officials says if the EU carries through with its threat of penalising Chinese airlines, they would immediately retaliate with measures against European airlines, which could include impounding European planes. There is now a Chinese working group to devise a list of retaliatory steps to be taken against the EU if any Chinese airline is penalised. They are still campaigning for the EU only to charge for carbon on internal EU flights. Under the EU plan, Germany will determine whether Air China is in breach of ETS regulations or not; France will monitor China Southern Airlines; and the Netherlands will monitor China Eastern Airlines.   Click here to view full story…

China will take swift counter-measures that could include impounding European aircraft if the European Union punishes Chinese airlines for non-compliance with a scheme to curb carbon emissions, the China Air Transport Association said on Tuesday.

………China, which according to Airbus and other sources in the European aerospace industry is delaying plane orders worth up to $14 billion from European planemaker Airbus over the row, has asked the EU to push the scheme back by a year.

“ICAO (the International Civil Aviation Organization) will hold its 38th meeting in October 2013, and the EU should at least push the deadline to that time and agree to resolve this issue based on the coordination of ICAO,” Wei said.