Boris is accusing the Government of “utter inertia” on airport expansion policy . He says waiting till 2015 for the Commission’s report would be “toxic and disastrous” for the next election. The Government is facing growing pressure for major infrastructure projects to help shore up the floundering economy. With no particular evidence to back their claims, some business leaders say more airport capacity is crucial to boosting trade and routes to developing markets. Boris argues that as China is building lots of new airports, we should build one too.  (No particular logic in that, as the case of China is utterly different to ours.) Boris says the Airports Commission needs to report more quickly, well before summer 2015. Sir Howard Davies has said his Commission is not to kick the tricky question “into the long grass” for political reasons, and that its report will be “a really expert piece of work” and “In order to build enough political consensus around the eventual solution, we will need to show that we have done in-depth analysis of the other options. At the moment, consensus is what is lacking.” 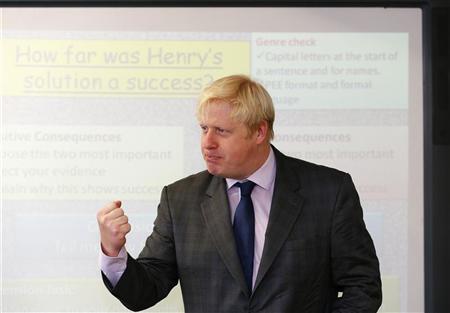 (Reuters) – London’s mayor accused the government on Friday of “utter inertia” on airport expansion policy with pressure growing for a launch of major infrastructure projects to help shore up the floundering economy.

Airport capacity is a divisive issue in Britain, pitting popular London Mayor Boris Johnson against Prime Minister David Cameron at a time when the British leader is facing a damaging rebellion from inside his own ruling Conservative party.

Cameron’s government is facing increasing demands for an acceleration of infrastructure projects as it seeks to breathe new life into the economy.

Johnson, a Conservative tipped in some quarters as a possible future prime minister, said the government was dragging its feet over aviation and losing momentum against other more aggressive market players.

He said an inquiry on the aviation sector’s future, launched on Friday and due to report after the next general election in 2015, was taking too much time.

“I think what is going on now is a good thing, it’s a productive process. I just think it could be speeded up, and there is absolutely no need to delay to 2015.”

Heathrow is the world’s third-busiest airport but it is close to full capacity. The government needs to decide whether to expand its existing facilities or consider other options.

The Conservative-led coalition blocked construction of a third runway there after it came to power in 2010. The idea of another runway had been unpopular with local voters and green groups as it would have meant a huge increase in the number of planes flying over London and its densely populated suburbs.

But speculation has been growing that Cameron could still go back to the plan if he wins the 2015 election.

He has demanded Cameron rule out the Heathrow third runway option both during the current parliament and beyond, a call echoed by other Conservatives in areas under its flight path.

Authority head Howard Davies, says it would review all expansion options fairly and come up with an interim report next year.

Options on the table include expanding existing airports such as Heathrow, Gatwick and Stansted, connecting London by high speed rail to an airport in the city of Birmingham as well as building Boris Island.

Davies denied his mission was part of a government ploy to kick the tricky question “into the long grass” for political reasons.

“Some of the criticism assumes that we will go into a huddle for a couple of years and then come out with ‘X solution’. It’s not going to be like that,” he told reporters.

“I do take the view, perhaps a naive view, that political opinions do to some extent reflect the fact that there are difficult choices here.”