A new authoritative study shows that only adoption of a global ‘market-based measure’ (MBM) can bring the ICAO goal, and aviation industry’s shared goal of 2020 ‘carbon neutral growth’ by 2050 within reach. The total impact of all other CO2 reduction measures currently on the table (improved technology and fuel efficiency of aircraft, improved operational efficiency and some use of biofuels) is shown to be insufficient. The report comes just before the March meetings of ICAO’s Council and its High Level Advisory Group, charged with advising on a resolution to address global emissions for ICAO’s triennial Assembly next September. Projections of future aviation emissions show by 2050 the cuts ICAO and IATA aspire to will not be met, without MBM, such as the ETS. The study demonstrates that claims from industry, ICAO and some governments that current measures being discussed will be sufficient to tame aviation emissions are false. It shows definitively that pricing carbon via a global MBM is the only way to arrest aviation’s climate impact – already at 5% of the global total, with traffic growing at 4-5% a year. The ETS, on which progress has been halted for a year, needs to be protected.

4 March 2013
A new study [1] published today by leading atmospheric scientist Professor David Lee of Manchester Metropolitan University shows that only the adoption of a global ‘market-based measure’ can bring the International Civil Aviation Organisation’s (ICAO) and aviation industry’s shared goal [2] of 2020 ‘carbon neutral growth’ by 2050 within reach. The total impact of all other CO2 reduction measures currently on the table is shown to be insufficient.

This new piece of research comes just ahead of the March meetings of ICAO’s Council and its High Level Advisory Group on International Aviation and Climate Change, charged with advising on a resolution to address global emissions for ICAO’s triennial Assembly next September.

The research assesses emissions reduction scenarios based on three types of CO2 cutting measures: improvements in aviation technology and operations; accelerated development and use of biofuels; and application of current regional carbon pricing measures – principally at this point the EU´s Emissions Trading System (ETS).

The projections, under a ‘middle of the road’ industry growth scenario, show that an ‘emissions gap’ of 153 to 387 Mtonnes CO2 (the range depends on mitigation level assumptions) remains by 2050. These projections combine all CO2 reduction measures proposed by ICAO and airlines and assume an extension of the EU ETS until 2050. Even at the lower range of uncertainty, this gap represents about a third of today’s international emissions levels.

The study concludes that an operational and effective worldwide market-based measure such as a globalised ETS would achieve much greater CO2 emissions reductions.

T&E programme manager for aviation, Bill Hemmings, said: “This study demonstrates that claims from industry, ICAO and governments like the United States that current measures being discussed will be sufficient to tame aviation emissions are patently false. The research shows definitively that pricing carbon via a global MBM is the only way to arrest aviation’s climate impact – already at 5% of the global total, with traffic growing at 4-5% a year.”

“With this information, ICAO needs to face up to its responsibilities this year and act to agree a global measure. There can be no further excuses. IATA and the American carriers’ A4A need to accept and urgently embrace carbon pricing – their own numbers simply don’t add up”, Bill Hemmings concluded.

Another key finding of Lee´s study, which emphasises the importance of carbon markets in reducing emissions, is the role of regional MBMs in the absence of a global measure: The EU ETS, if extended beyond 2020 to 2050, achieves the largest reduction of any single measure analysed [3]. Such measures can deliver CO2 savings of up to 587 Mtonnes CO2 per year in 2050.

Aviation Environment Federation director, Tim Johnson, said: “Lee’s figures demonstrate that the EU ETS, if extended to 2050, will have a measurable impact on reducing global aviation emissions – and it should be protected until an agreement to implement global carbon pricing is reached. The European Union has ‘stopped the clock’ for a year to give room for ICAO to act. The ICAO Council and High Level Group are now in the spotlight. Those states and parts of industry opposing a global agreement at ICAO need to explain how their plans can achieve the stated goals given Prof. Lee’s analysis.”

Professor Lee [4] developed the growth scenarios and mitigation options based upon the methodology and databases utilised for the 2011 UNEP Bridging the Emissions Gap report.

2. ICAO resolved at the 37th General Assembly that it would work together with its Member States and relevant organizations “to strive to achieve a collective medium term global aspirational goal of keeping the global net carbon emissions from international aviation from 2020 at the same level…” This is referred to in Lee’s report as the ‘2020 carbon-neutral goal’. Likewise, the airlines, under their trade organisation IATA, pledged in 2009 to a ‘carbon-neutral growth by 2020’: http://www.iata.org/pressroom/pr/Pages/2009-06-08-03.aspx.

3. Meanwhile, Airlines for America (A4A), the U.S. airlines lobby, continues to campaign against any market-based mechanism, such as a carbon market, for the rest of the decade, preferring an approach which focuses on improving “technology, operations and infrastructure”:http://www.reuters.com/article/2013/02/22/eu-icao-climate-idUSL1N0BM12120130222?feedType=RSS&feedName=everything&virtualBrandChannel=11563

4. Professor David Lee was lead author of the aviation chapter of the 2011 UNEP Bridging the Gap report. He is a member of an IPCC working group on these issues and an independent scientific adviser to ICAO.

.
The emissions reductions available from the range of BAU (business as usual) to MFR (maximum feasible reduction) technology and operational improvements did not meet the 2% yr-1 improvement in fuel efficiency for international aviation at any point in time to 2050.
. 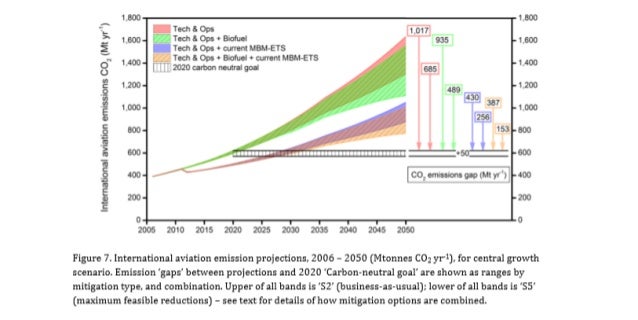 To see a larger version of this graph click here 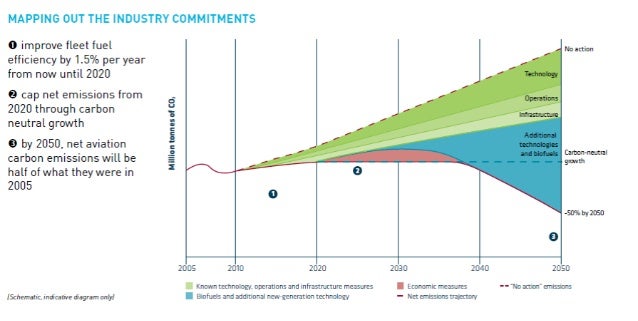 To see a larger version of this graph click here.

The Conclusions and Recommendations from the report:

From baseline emissions of 630 Mtonnes of CO2 in 2006, total aviation emissions are projected to increase to between 1,034 and 3,105 Mtonnes of CO2 by 2050. This emission range encompasses at the extremes, high growth, BAU technology and operational improvements, compared with low growth, MFR technology and operational improvements, “speculative” levels of biofuels and extension of existing regional MBMs at the same cap level to 2050. For international aviation, the similar span of emissions by 2050 is 620 to 2,031 Mtonnes CO2, on a 2006 baseline of 391 Mtonnes CO2.

The emissions reductions available from the range of BAU to MFR technology and operational improvements did not meet the 2% yr-1 improvement in fuel efficiency for international aviation at any point in time to 2050. When MFR technology and operational improvement reductions were combined with “speculative” levels of biofuels, the 2% goal for international aviation was just exceeded by -10 Mtonnes CO2 in 2050. Any combination of measures that included extension of existing regional MBMs exceeded the 2% goal at any point in time out to 2050.

The maximum reductions over BAU technology and operational improvements were clearly achieved by the extension of the existing MBMs out to 2050. A global scheme constructed on similar lines is likely to achieve more savings, assuming that sufficient C savings can be made outside the aviation sector, and be bought at a price that does not suppress demand more than has already been assumed in the calculations (8.4%).

In order to further quantify environmental and the most cost-effective benefits, it is recommended that the CO2 radiative forcing and temperature responses be studied (as these will give a better comparative measure of environmental effectiveness than end-point emissions), and relative costs of the different measures be further studied. 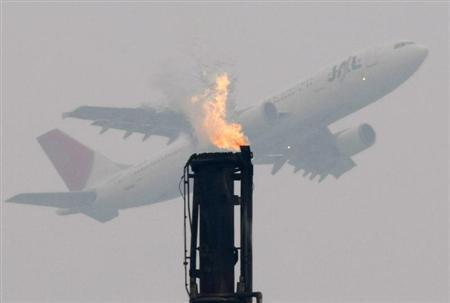 (Reuters) – Aviation pollution can only be stabilized by the middle of the century if a price is set on airline carbon emissions, research said, countering industry hopes that green goals can be met via technology improvements and biofuels.

A European Union program to force airlines using EU airports to pay for their carbon emissions caused an international outcry, forcing the European Commission to propose a year-long freeze of its law.

As an alternative to the EU program, U.N. body the International Civil Aviation Organization (ICAO) is trying to agree a world-wide plan to curb aircraft emissions and meets again this month to try to make progress.

The research published on Monday by Manchester Metropolitan University (MMU) in Britain, a specialist in environmental and aviation research, looked at all the proposals under consideration, including technological improvements, biofuels and streamlined take-off and landing procedures.

It found that the only way to have a significant impact was to put a price on carbon – in other words, to use a market-based measure (MBM), such as the EU Emissions Trading Scheme (ETS).

“I think the simple message is that all measures are needed to reduce emissions. What we highlight is the potential gains from the MBM, which is the subject of so much political controversy at the moment,” David Lee, a professor at MMU who led the research, told Reuters.

Lee has worked on a specialist research group for the ICAO as part of its efforts to tackle aviation pollution. He is also a technical advisor to the UK’s Department for Transport on aviation, climate and air quality issues.

REACHING FOR THE SKY

In 2010, the ICAO provisionally agreed to work towards a global goal of “carbon-neutral growth” for aviation from 2020, while the European Union advocated a 10 percent reduction by 2020 compared with a 2004-2006 baseline.

With both those targets looking unachievable, the report explored likely growth to 2050. By then, EU road maps state carbon emissions from all sectors must fall by between 80 and 95 percent versus 1990 levels to limit global warming to 35.6 degrees Fahrenheit, the level scientists say is needed to avoid the worst effects of climate change.

Assuming the EU’s ETS is extended to 2050, the report found it could deliver CO2 annual savings of up to 647 million tons by the middle of the century.

Based on scenarios of what kind of measures are agreed, it predicted total aviation emissions would rise to between 1,139 million tons and 3422 million of carbon dioxide by 2050 compared with 694 million in 2006.

Commission figures predict the EU ETS could save 70 million metric tons of CO2 a year by 2020, but global aviation emissions will still be around 70% higher in 2020 compared with 2005.

Aviation and shipping are the only sectors not covered by developed nations’ commitments under the Kyoto Protocol on tackling climate change.

Even though the Commission, the EU executive, has proposed a freeze on its requirement that all aviation pays for its carbon, the European Union is still charging internal EU flights for their emissions via its ETS.

The EU executive has said it will automatically reapply its law to all flights if the ICAO fails to agree a convincing global alternative. The European Parliament is expected to endorse the Commission plan in April.

So far, the ICAO talks have delivered little progress.

Campaigners have in particular singled out the United States, the biggest aviation emitter, as an obstacle because of a position paper showing it has proposed an airspace-based approach that would mean a huge number of emissions were not accounted for.