Updates on the hunger strike each day on the ACIPA website at  http://parolesdecampagne.blogspot.co.uk/ There are now 5 hunger strikers. Michel (aged 64) is on his 28th day of hunger strike, and one person has recently had to give up, on health grounds

Details each day and updates on the ACIPA website

On 3rd May the campaigners against the proposed airport outside Nantes in South West France occupied the centre of Nantes with a convoy of tractors and 1,000 people – and 15 young cows. They are supporting the peasant farmers whose land would be compulsorily purchased for the new airport, and who have nearly completed their 4th week of a hunger strike.  They are relieved that Hollande has won the Presidency.  The campaigners had earlier forced Hollande, who has supported Nantes Airport, to agree it will not go ahead until all the legal cases have been heard.  Sarkozy had just said the area is just a wasteland without the airport! The protesters see that as an insult to the beautiful farming area and especially to the farmers on hunger strike. The 5 hunger strikers are getting weaker, and finding the exhaustion more difficult. They are brave people.

23rd day of the Nantes airport hunger strike, and protest demonstration of around 1,000 in the town

The campaigners against the proposed airport outside Nantes in South West France have today occupied the centre of Nantes with a convoy of tractors and 1,000 people – and 15 young cows.  They are supporting the peasant farmers who have moved into their 4th week of a hunger strike and are making their voices heard before Sunday’s Presidential Election.  Already the campaigners have forced Hollande, who has supported Nantes Airport, to agree it will not go ahead until all the legal cases have been heard but Sarkozy, when questioned, said the area is just a wasteland without the airport!  That is an insult to the beautiful farming area and especially to the farmers on hunger strike. 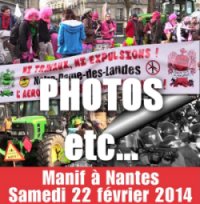 There are now 6 hunger strikers. Michel is on his 23rd day

Nantes. 200 tractors and 15 heifers against airport

A new anti-airport protest Notre-Dame-des-Landes was launched at the initiative of the Peasant Confederation, the defense association of farmers and the support committee for the hunger strikers . They demand the freezing of expropriations as legal remedies are not exhausted.

The three convoys of tractors arrived in the city center of Nantes, and between 800 and 1,000 demonstrators.

Farmers have brought fifteen heifers aged a year into Notre Dame des Landes. They were installed in an improvised enclosure protected by an electric fence, a stone’s throw from the Place du Commerce, in the square facing the tribunal.

After the departure of 171 tractors from all over the Loire-Atlantique, and even further afield,  it is expected that the animals will remain in the center of Nantes, guarded by local farmers who will take turns to look after them. “It’s a symbolic occupation of the city, a way to challenge society on waste land “ , said an official of the Farmers’ Confederation, recalling that the Loire-Atlantique department is one of the first consumers of agricultural land.

“This can not continue. “ And Philip Collin, spokesman for the National Peasant Confederation adding: “We must do away with projects that have no other function than to satisfy the ego of local politicians. “ There are many videos on the Nantes protest and hunger strike at http://www.scoop.it/t/videos-ndl

Much more from ACIPA, the local group that is organising the protests, with daily updates, at  http://parolesdecampagne.blogspot.fr/

Interview with N. Sarkozy in France and West’s response to the question of airport Notre Dame des Landes (NDL) shows his total ignorance of the subject and his contempt for the people there.  Imagine saying ” without airport, NDL is a big empty lot!  “.
We peasants of Notre Dame, live here with dignity and to maintain our beautiful playground! 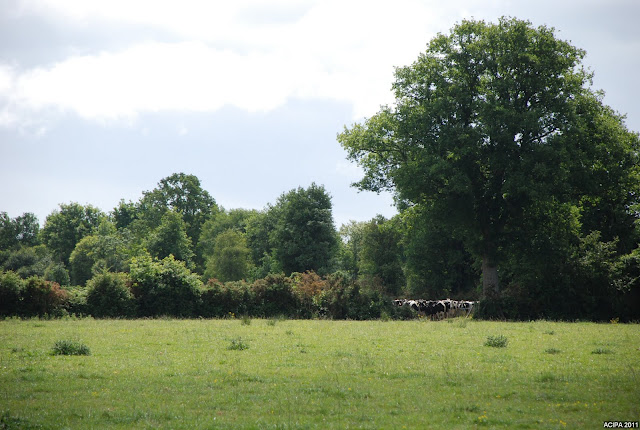 Notre Dame des Landes – a beautiful wasteland, is it not?
The press briefing on May 2  was focused on the priority issue of the constitutionality on expropriation (compulsory purchase).  Erwan Le Moigne denounced the tragedy of the steamroller of the archaic procedure of expropriation. This tragedy, we find in the testimony of Brigitte:
“Time was unleashed: the winds of this month of April we are to stay indoors after the animal care. I think of you hunger strikers and salute your courage: it should not be easy in this cold.  Meanwhile, prepare the defense of our means of working, and of our home; put simply, of our life.   Not easy to keep in mind the importance of what we have here; we inherited it and we want to pass it on to our descendants;  so to what should we ascribe value?
Politicians do not answer you when you ask them this; it is already done.
Vinci has mapped the future of our land: it will be concrete.
And we men and women, what are we? We are not machines, we have a heart and blood flowing in our veins.  We love our land, we love, and we work it with respect, more respect than we give Mr. Sarkozy and Holland.
The first round of the campaign is over. The promises continue to disclose to blow the meeting. As for the Grenelle de l’ Environment ( a policy document), what will happen after the second round?
What is certain today is that our friends the hunger strikers are holding on, but how far will they have to go to be heard?  To date, no response to their questions has arrived.  Why such haste for this project from Notre Dame des Landes? Public money is scarce and the exising Nantes Atlantique airport works very well.
Our farmlands are not elastic. We can not believe that men in power who have three meals a day, consider this treasure we have trivial!  How far will the voters, who have to tighten their belts and open their wallets more and more often, be willing to follow?
Revolt! Do not let others decide for you!
Demand that your elected officials preserve the natural resources that are inexorably destroyed by concrete workers.
Brigitte, peasant being expropriated at Notre Dame des Landes

Here we go. The only debate of the French Presidential elections have come and gone. Sunday, Mr. Sarkozy and Hollande will be either reelected or elected as the President of the sixth world economy.

During nearly three hours, none of them have mentioned environmental issues.Peak oil occurred during the last Presidential mandate, but both candidates are acting as if there would be cheap oil for ever and ever.

The next five years are absolutely critical in mitigating climate change AND averting the worsening economic recession because of higher oil prices. Do they care ? It doesn’t seem so.

The centerpiece of President Sarkozy’s environmental policy – known as The Grenelle de l’Environnement – was a great idea but it hasn’t achieved a fifth or a tenth of what needs to be done.

It had started quite well but has slowed down and slowed down and long died without a whimper and without anybody noticing. Worse, the environmental and energy issues are absent of his program this year. (and this despite a roundtable on the very subject last year…)

François Hollande’s programm on these issues is either laughable or downright scary. Thinking nuclear is a bad thing for France means that emissions would rise instead of decreasing fast and big.

Sure, there are the mandatory some efficiency measures but nothing that really would tackle the issues in the way they should be…

The Economist noted that France was in denial when it comes to its elections, it seems it was quite right…

Green jobs in both efficiency and cleantech have the potential to spur sustainable economic growth. But in France as in most G20 countries, these opportunities fall into deaf ears…