Barely three years after plans for a third runway were scrapped by the incoming government and abandoned by Heathrow, the airport has restated its case and returned with even bolder expansion plans.  One local historian living in Stanwell remembered the Terminal 4 inquiry: “I sat in the room for the Terminal 4 inquiry – not even Terminal 5 – and the planning inspector said, ‘Ladies and gentlemen, I can promise you this is the very last one.’ You can’t believe them when they say this is the end.” According to a single well-placed source, the draft shortlist to be presented by the Airports Commission on 17th December contained three options, each including a Heathrow runway. People due to be badly affected if Heathrow is allowed a runway fear it will “swallow up the borough”. Although Stanwell Moor is threatened with total destruction, the people in its 850 homes will be compensated and can move away – regarded by some, at least, as better than being trapped in unsaleable houses. A local councillor said: “I liken it to a funeral – it’s not so much the people who die as the ones who are left behind.” Communities both to the north and the south fear the dreadful prospect of being left close to the end of a runway, but not near enough to be demolished.
.
Tweet

Barely three years after plans for a third runway were scrapped, Heathrow has returned to the front of the queue with bolder expansion plans 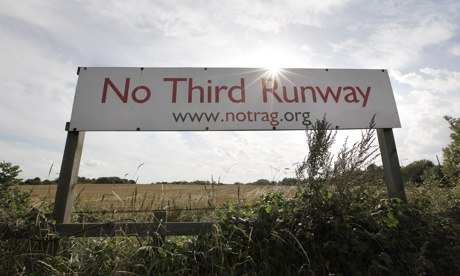 A banner protesting against a third runway is seen in the village of Sipson near Heathrow Airport in west London August 28, 2012. Photograph: Stefan Wermuth/Reuters

The people of Stanwell, bordering Heathrow to the south, have a proud record of rooting out the untrustworthy. Beryl Wilkins, a local historian, lives a stone’s throw from a former school built in 1624 as a bequest from the lord of the manor, Lord Knyvett – the man, she says, who felt the collar of one Guy Fawkes.

Some undistinguished moments in Heathrow’s own history she witnessed first hand: “I sat in the room for the Terminal 4 inquiry – not even Terminal 5 – and the planning inspector said, ‘Ladies and gentlemen, I can promise you this is the very last one.’ You can’t believe them when they say this is the end.”

Barely three years after plans for a third runway were scrapped by the incoming government and abandoned by Heathrow, the airport has restated its case and returned with even bolder expansion plans.

Locals fear that next week’s interim report from the Airports Commission will set the gears in motion towards the next runway. In his one major statement, commission chairman Sir Howard Davies said he believed additional airport capacity was needed in the south-east, and promised to narrow down the candidates for new runways to a workable shortlist, to avert blight and allow the ultimate political decision to be taken as soon as the timetable demanded.

According to a single well-placed source, the draft shortlist contained three options, with plans submitted by London mayor Boris Johnson for a new hub airport in the Thames estuary eliminated on cost grounds, leaving a choice of a three-runway Heathrow, a four-runway Heathrow, or expansion at both Heathrow and Gatwick. The source claimed the narrowing of focus had alarmed David Cameron and George Osborne, who set up the commission to delay engaging with a toxic political question until after the election.

Even should the estuary plan, or Johnson’s alternative of a vastly enlarged Stansted, remain as options after Davies publishes on Tuesday, many will now suspect the favoured option is an ever-expanding Heathrow.

Little wonder that neighbours such as Wilkins can claim Heathrow, unchecked, would “swallow up the borough”. She won’t reveal her age, but says: “We used to go to the farm there to get milk in the morning, in Heathrow village. It was lovely.” Stanwell, which claims a mention in the Domesday Book, sits on the southern perimeter. But when Heathrow published a new potential runway location in June, Stanwell was suddenly on the map as a small residential peninsula with airport on three sides, and directly under the flight path.

The runway obliterates a reservoir and the neighbouring village of Stanwell Moor and “points like a dagger” at the village’s historic heart, in the words of Robert Evans, the county councillor representing both communities. Although Stanwell Moor is threatened with total destruction, the people in its 850 homes will be compensated and can move away – regarded by some, at least, as better than being trapped in unsaleable houses. Evans says: “I liken it to a funeral – it’s not so much the people who die as the ones who are left behind.”

There are similar sentiments in Sipson, the focus of campaigners’ resistance last time round, and now menaced by two of the three potential Heathrow runways. A north-east option would, again, mean demolition – but the worst option, residents say, would be the third: to spare it, demolish neighbouring Harmondsworth and leave Sipson bang at the end of a runway.

Jackie Clark-Basten, proprietor of Hair by Jackie in the centre of Sipson, says the new proposal is “worse than last time”. She said: “They’ve decimated this village. Now they want to put it somewhere else and let us suffer the consequences.”

Hundreds of homeowners and long-term residents left as Heathrow bought up their houses. Jackie’s husband Danny also used to work in the business, until the exodus from Sipson saw trade plummet. “As a men’s barber, it’s worse,” he said.

The couple chose to diversify, with Danny seeking work elsewhere – inevitably, perhaps, finding a job at the airport, as a team leader in British Airways’ cargo division. He talks passionately about the benefits and opportunities of the expanding business, a staging post in flying pharmaceuticals between the US and India. So does he support a third runway, with all it has meant for Sipson? He hesitates, catches his wife’s eye. “I’m not from the village.”

In the hairdresser’s chair, customer Doris Booty, a lifelong resident says: “It’s terrible what they’ve done: when you walk through the village, the windows, the gardens …” She considered selling up but did not go through with it: neighbours left, and Sipson’s is in effect a transient population.

Some recent arrivals are doing their best to counter that. Ian West, a veteran of climate camps, has been living at Grow Heathrow since 2010, a sustainable living project set up on derelict land in the heart of Sipson following the last runway battle. “Although they had won, people here were feeling exhausted. Sipson was left in limbo,” he said.

Europe’s busiest airport aArgues that only a large hub – one with sufficient numbers of connecting flights and passengers – can sustain the international connections business needs. It operates at full capacity, making it susceptible to snow or other disruption. It has submitted plans for three possible new runways.

Wants a second runway, and argues thatit would create genuine competition to benefit passengers. Rejects the hub argument. A and affects far fewer people with noise and pollution – and might present an easier compromise solution politically.

Boris Johnson’s vision is pPersuasive on noise abatement and in aviation terms but would require a massive redevelopment of transport links, housing and other infrastructure, that makesing it a rank outsider.

Johnson’s second best hope for a four-runway hub. Room to expand but is only half full and there is little appetite from airlines even now.

Among the 50-plus submissions Davies has received, a four-runway Luton, a Severn Estuary hub, a drive-through airport and an orbital high-speed train linking all of London’s airports are expected to be ruled out.

Over 200 people attended a meeting in Stanwell Moor Village Hall, organised through the residents’ association, on 3rd September, with standing room only. The people of Stanwell Moor face eviction and the demolition of their houses, and those in Stanwell face blight and an uncertain future – the possibility of intense aircraft noise and air pollution if another runway is allowed. There were people queuing outside trying to get in, such was the demand to hear what the Heathrow airport operators had in mind for their area. Nigel Milton, Heathrow’s director of policy, said 850 homes in Stamwell Moor village would be demolished to make way for a 3,500 metre runway – if it was ever allowed.  Kathy Croft, chairman of the Stanwell Moor Residents’ Association, said:  “It will then be for the next government to act. Kwasi Kwarteng was invited but he gave his apologies … “. The problem of large areas of blight that will inevitably be caused if the Airports Commission put Heathrow on their short list in December is a very real one.  There will be another meeting on 18th September, organised by Spelthorne Borough Council.

‘Quick death’ might be better for Stanwell Moor in Heathrow debate

A “quick death” for Stanwell Moor is the best-case result for residents – that was the feeling after a meeting on 1st July to discuss the blight of a potential third Heathrow runway through the village. The threat of long term blight and community death are some of the most serious concerns. Kathy Croft, chairman of Stanwell Moor Residents’ Association, said after the gathering: “I would rather a quick death for Stanwell Moor than endure the fate suffered by Sipson.” Heathrow has yet to confirm or deny the reports of plans for a third runway to be built over the Stanwell Moor area – it will publish its submission to the Airports Commission on 17th July. The Stanwell Moor Residents have another meeting with Heathrow scheduled for July 18. A spokesman for Heathrow said: “It is important that those who are most affected by the airport are given the opportunity to put their concerns to Heathrow first hand, and that we listen and respond to them. “We will continue to meet regularly with local communities, such as Stanwell Moor as we move forward through this process.” Mrs Croft said: “I would just like a decision, the last thing we want is to be like Sipson.” 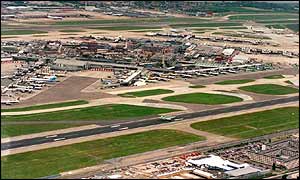 Heathrow could get a third runway

More than 10,000 homes may have to be demolished around Heathrow because of a massive increase in air pollution if a proposed new runway is built, it is reported.

This far exceeds original estimates outlined by the government last week during its announcement of possible expansion plans at Heathrow and other UK airports.

It said then that only 260 homes would have to be demolished to make way for a new 2,000-metre runway in west London.

However, notes on air quality, which form part of the consultation documents issued at the time of the announcement, say people exposed to pollution above EU limits may also have their homes pulled down.

The Times reports that the document for the south-east states: “By 2015 some 35,000 people could be exposed to an exceedence of the annual average EU limit for nitrogen dioxide if a third runway was built.”

This could be reduced to 5,000 people, but only if the aviation industry makes much faster improvements in engine technology.

Oxides of nitrogen cause lung diseases and breathing problems.

The areas near Heathrow facing the greatest threat from pollution are Sipson, Harlington, Hayes and West Drayton.

The airlines would have to provide reassurances they were dealing with the pollution issue if they are to make the case for the new runway.

This could include responsibility for the cost of funding the purchase and demolition – where necessary – of properties, although they are likely to argue that compensation should come from the government.

A spokesman for the Department of Transport said: “In answer to the question whether the government would be prepared to see the purchase and demolition of the houses of 35,000 people, or how many houses we would accept being demolished, we have made clear that we want to minimise the adverse impacts of growth in aviation.

“Minimising the impact on people’s homes is an important part of this objective.”