People moving into new homes close to Amsterdam’s Schiphol airport will be warned about aircraft noise before they move in, and the warning will become part of sales contracts.  Agreement on an official aircraft noise warning has been reached between the Dutch junior infrastructure minister, Schiphol airport, airline KLM and local and provincial governments.  While no new homes are being built directly under flight paths, thousands of houses are being built in areas where noise is likely to be a problem – as aircraft noise is heard some way from the direct line of a flight path. In particular, 4,500 new homes are being built south-east of Amsterdam close to the Buitenveldert runway and there are other building projects in areas where aircraft noise will have to be taken into consideration. People are told they can then not complain about plane noise, so the aviation industry will not be faced with extra costs and further expansion of housing stock will be made possible. It has already been agreed that municipalities and provinces will point out the new residents to potential inconvenience. Municipalities will not submit requests to change the flight path routes. The aim is that housing can not block further aviation growth after 2020.
.
Tweet

New residents to get official warnings about aircraft noise

People moving into new homes close to Amsterdam’s Schiphol airport will be warned about aircraft noise before they move in, and the warning will become part of sales contracts, the Haarlems Dagblad has reported.

Agreement on an official aircraft noise warning has been reached between junior infrastructure minister Sharon Dijksma, Schiphol airport, airline KLM and local and provincial governments, the paper says. While no new homes are being built directly under flight paths, thousands of houses are being built in areas where noise is likely to be a problem.

In particular, 4,500 new homes are being built south-east of Amsterdam close to the Buitenveldert runway. Other projects in Zaandam, Badhoevedorp, Hoofddorp and Beverwijk will also have to take aircraft noise into consideration.

The paper says that by warning potential residents about the aircraft noise, the sector will not be faced with extra costs and further expansion of housing stock will be made possible.

In Dutch media we see a large stream of negative articles concerning Schiphol Airport. Politicians are not amused. State Secretary Sharon Dijksma of Infrastructure and Environment is having the environmental impact assessment (MER) of Schiphol Airport re-examined; read the article on nltimes.

A leading newspaper opens today with: ‘GeSchiphold’ means ‘being Schipholed’: a phrase invented by former (conservative!) minister Winsemius, meaning that Schiphol does everything to grow and ignores other interests: not willing to measure noise, but to calculate and manipulate the outcome to take advantage. Declare that aircraft are getting silent and clean soon, so there is room for growth. Even complaining will be prohibited for buyers of new built houses in the region.

Not only the Schiphol MER is in discussion but also the MER concerning satellite Lelystad: the airport calculates noise in a wrong way. This could have enormous consequences for growth possibilities in this densely populated country.

The article translated from Dutch by Google Translate says:

Do not complain about Schiphol in new building 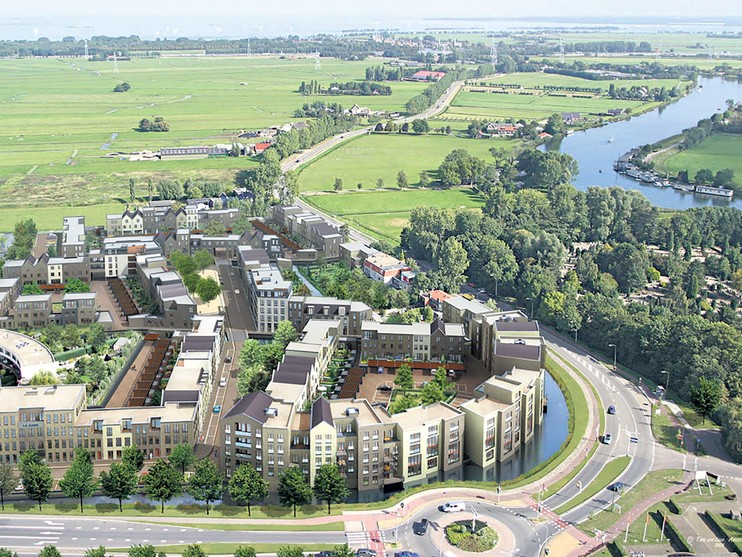 Part of the new building in the Bloemendalerpolder near Weesp.
By Frans van den Berg  (Haarlems Dagblad)

Anyone who lives in a new building around Schiphol is referred to as the airplane ferry. Complaints about it do not really matter.

That agreement made the municipalities, the provinces, KLM and Schiphol with state secretary Sharon Dijksma. It’s a shaky compromise in a discussion that has been going on for years. The new rules must come into effect on January 1st.

Immediately in line with the runways, the noise is the greatest, as is the danger of planes crashing. The construction of new homes is forbidden there, and the aim is to demolish homes.

In the sound zones, therefore, housing was not possible, to the displeasure of many municipalities. In many small cores, commercial buildings or greenhouses are empty, where municipalities like to build homes. Thus, those nuclei remain viable. Eventually, the Secretary of State agreed with these small construction plans. Large construction plans and building in remote pastures were not allowed.

But with the New Kern project, KLM and Schiphol still have the fear of the heart. In the area between the Arena, Duivendrecht station and the A10 and A2 motorways, the municipality of Ouder-Amstel wants to build as many as 4500 homes between 2020 and 2029. An area just below the Buitenveldertbaan.

In the resistance, the aviation sector receives the support of residents’ groups in the Schiphol Environment Council. “You do not have to build under the escape routes. These are questions about problems. We do not want a second Buitenveldert. The construction of houses in the Bloemendalerpolder near Weesp was already a mistake. They also come under a route, “emphasizes representative Kees van Ojik. “But municipalities and provinces would like to build and push their plans.”

Meanwhile there are plans for 300,000 new homes in the metropolitan area of ​​Amsterdam. Most are just outside the noise limits of Schiphol. But in addition to in Ouder-Amstel, there are projects such as Zaandam, Badhoevedorp, Zwanenburg, Hoofddorp and Beverwijk, where residents should be taken into account. Really controversial is the plan to make 2500 student rooms in Kronenburg (Amstelveen). So far, the Secretary of State has refused permission to do so.

It has already been agreed that municipalities and provinces will point out the new residents to potential inconvenience. That will also be in the purchase agreement, with a chain penalty on sale. The starting point is that the sector is free from additional costs. Municipalities will not submit requests to change those routes. Housing can not block further aviation growth after 2020.

October 19, 2017   (Haarlems Dagblad)
The government has acknowledged that noise levels estimated from air traffic have been miscalculated, broadcaster NOS reports.
Sharon Dijksma, minister for infrastructure and environment, has now reportedly acknowledged that this means the local effects of Schiphol airport and its potential growth must be reassessed.
Leon Adegeest, a member of the HoogOverijssel campaign group and a software specialist, became suspicious when seeing figures that claimed aircraft at 900 metres cause no noise.
Although when a plane is flying low, it causes more noise on land than when it is high, he told the NOS Radio 1: ‘Planes fly very low over Zwolle and I saw that no noise nuisance was predicted. That can’t be right. Even with common sense you can see this. There was something strange going on.’
After the government refused to release calculations, he made his own software and discovered where the infrastructure and environment ministry had gone wrong, using incorrect calculations for the Boeing 737 engine’s noise.

The figures he was analysing came from nuisance from Lelystand Airport but the same model was apparently used to make calculations for Schiphol. A reanalysis could limit how much the Netherlands’ main airport is permitted to grow from 2020, reports the Financieele Dagblad.