London City Airport runway blocked by protesters in support of “Black Lives Matter”, who got there by dinghy

Flights at London City Airport were disrupted this morning after a group of protesters occupied the runway.  Earlier reports said they were from Plane Stupid, but later reports say they are in support of “Black Lives Matter”.  Police were called to the airport at 5.40am to reports of demonstrators getting onto the runway.  They got to the runway by using a small rubber dinghy to get across the Royal Docks.  A statement released by the group said: “This morning activists in support of Black Lives Matter UK shutdown London City Airport… This action was taken in order to highlight the UK’s environmental impact on the lives of black people locally and globally. As the largest per capita contributor to global temperature change and yet among the least vulnerable to its deadly effects, the UK leads in ensuring that our climate crisis is a racist crisis.” The protesters are chained together, as the Plane Stupid group were in their protest occupation of the runway at Heathrow (13th July 2015, after the Airports Commission’s final report). All flights due to land at London City airport have been diverted to Southend and Gatwick airports.  Currently the Met Police say they are on the scene and “the incident is ongoing.”  The runway was closed for around 6 hours. All 9 protesters were arrested and are in police custody.
Tweet 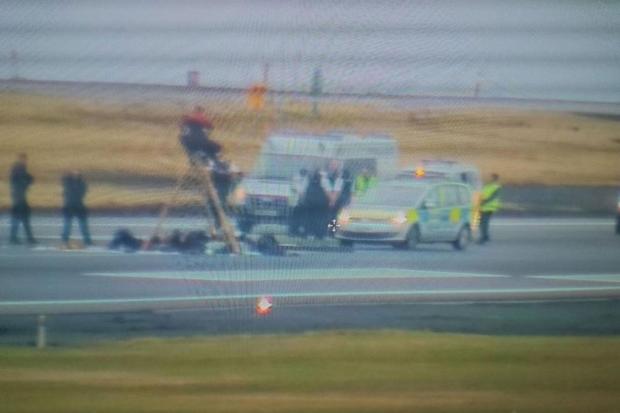 Protesters on the runway at London City Airport

.
Flights at London City Airport were disrupted this morning after a group of protesters occupied the runway.

Police were called to the airport at 5.40am to reports of demonstrators getting onto the runway.

The protesters from campaign group “Black Lives Matter”, got onto the tarmac at the airport after using a boat to sail across the Royal Docks.

A statement released by the protest group said: “This morning activists in support of Black Lives Matter UK shutdown London City Airport in the London Borough of Newham.

“This action was taken in order to highlight the UK’s environmental impact on the lives of black people locally and globally.

“As the largest per capita contributor to global temperature change(1) and yet among the least vulnerable to its deadly effects(2), the UK leads in ensuring that our climate crisis is a racist crisis.”

It came as thousands of British Airways customers suffered hours of delays at airport check-in desks due to a technical glitch.

A witness at the airport, who asked not to be named, said: “They got onto the runway using a rubber dinghy from the dock.

“They are on the runway surrounded by police. I’m not sure if they are chained together but they are huddled together.”

All flights due to land at the airport have been diverted to Southend and Gatwick airports.

A spokesman for the airport said: “The runway is currently closed due to protesters on site.

“Police are present and we will resume normal operations as soon as possible. We apologise to passengers for any inconvenience to their journey.”

A Met Police spokesman said: “We believe that the protesters are airside.

“We are on scene at the moment and the incident is ongoing.”

At 6.55am London City Airport tweeted that:

We’re currently experiencing disruption to all flights due to protestors at the airport. Police are currently on the scene.

There have been other protests recently by Black Lives Matter.  One was on the motorway near Heathrow in August 2016.

The BBC report at

The Black Lives Matter UK movement has confirmed it is responsible for the protest.

The airport said inbound flights were being diverted and it hoped to “resume operations as soon as possible”.

Black Lives Matter UK said: “Whilst at London City Airport a small elite is able to fly, in 2016 alone 3,176 migrants are known to have died or gone missing in the Mediterranean.

“We note, however, that the UK is willing to charter special flights to remove black people from the country based on their immigration status.”

Scotland Yard said its officers were “negotiating” with the group and awaiting the arrival of specialist resources to “unlock the protestors”.

Just as a reminder – London City airport is NOT exclusively for business. Around half of its flights are leisure trips, as this recent tweet confirms:

Other comments from other reports:

In a statement, a Scotland Yard spokesperson said: “Nine people erected a tripod and have locked themselves together on the runway.Officers negotiated with the protesters and specialist officers arrived to “unlock” the protesters.

“At approximately 09:30hrs officers started to arrest the protesters. Nine people have been arrested on suspicion of aggravated trespass, being unlawfully airside and breaching London City Airport bylaws.

A Black Lives Matter statement said: “The average salary of a London City Airport user is Euro 136,000 and 63 per cent of them work in business, finance or other business services. It is an airport designed for the wealthy.

“At the same time 40 per cent of Newham’s population struggle to survive on £20k or less.”

Police said nine protestors chained themselves to a tripod in the middle of a runway to ‘highlight the UK’s environmental impact on the lives of black people’.

The apparent ease with which the demonstrators could get “airside” is likely to trigger more sophisticated measures to protect against attacks, and a greater focus on the threat posed by attackers armed with something more lethal than a tripod.

Later the names of the protesters were given:

Among those charged are Plane Stupid activists, William Pettifer (who works on an organic farm in Radford, Somerset) and Esme Waldron (a student from Brighton) who blocked one of the Heathrow access tunnels in 2015.

Also Richard Collett-White, from Bedfordshire, ex-student president of Exeter College JCR, Oxford.  And Natalie Fiennes,  a film producer from Wandsworth, who is a cousin of renowned actors Ralph and Joseph.

Also Ben Tippet, an LSE graduate. And Sama Baka, Sam Lund-Harket,  and Alex Etchart,  who all live in a houseboat on the River Stort.  And Deborah Francis-Grayson, from Slough.

The five men and four women have been released on bail to appear before Westminster Magistrates’ Court on Wednesday 14th September.

At around 3.30am a group of 13 climate change activists from the group Plane Stupid cut a hole in the perimeter fence at Heathrow, and set up a protest  on the northern runway. They set up a tripod of metal poles, and metal fencing panels, and locked themselves onto these. Some were attached by D locks around their necks, onto the fence.  Others used arm locks (two people link arms, linked together with carabinas, inside a hard tube) to make it difficult for police to remove them. Police arrived on the scene shortly after the protest was set up. The first flights arrive at Heathrow from around 4.30am. Flights were delayed while the airport needed to shift runways.  Six protesters were removed quite quickly.  The protest was due to the recommendation of the Airports Commission that a 3rd runway should be built at Heathrow.  Besides the serious negative impacts of the runway on noise, air pollution, destruction of Harmondsworth, huge costs to the taxpayer and considerable social disruption for miles around, the issue which has been glossed over is the CO2 emissions that the runway would create from greatly increased flights, many long-haul. The Commission itself was aware that a new runway would mean the UK could not achieve its aviation carbon cap, and make it less likely the UK could meet its legally binding carbon target for 2050.