The plane that crash-landed at Heathrow last winter had low fuel pressure at
the inlet to the fuel pumps, an accident report claimed yesterday. 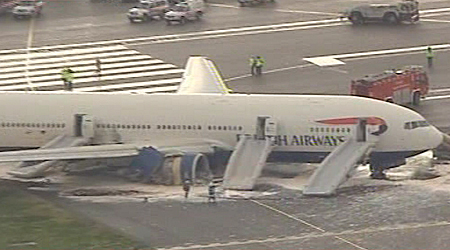 The crashed plane at Heathrow

The British Airways Boeing 777 came down before the runway because the engines
lacked power.   The onboard computers detected the reduced fuel flow between the
tanks and the high-pressure pumps and instructed the metering valve to open fully,
according to the interim accident report.

‘The fuel metering valve responded to this command and opened fully but with
no appreciable change in the fuel flow to either engine,’ revealed the Air Accidents
Investigation Branch.

There was no evidence of aircraft or engine control system malfunction nor of
a birdstrike or engine icing.

It is the fourth report the AAIB has made into the incident and was published
‘in view of the sustained interest within the aviation industry and among the
travelling public’.

‘The focus of the investigation continues to be the fuel system of both the aircraft
and the engines, to understand why neither engine responded to the demanded increase
in power,’ the AAIB revealed.

‘Extensive full-scale engine testing has been conducted at the Rolls-Royce factory
in Derby and fuel system testing is ongoing at the Boeing firm in Seattle.’
All 16 crew and 136 passengers survived the January 17 crash.