Scandinavian airline SAS  is to announce a cost cutting plan, approved by its lenders, containing over 1,000 staff reductions and 15% pay cuts.  SAS, in which Denmark, Norway and Sweden own a combined 50 % stake, has been in talks with banks on securing financing to roll over debt coming due next year. It has postponed its third-quarter results, saying it was delaying publication until negotiations on efforts to ensure its survival had been finalized.  It also aims to sell assets totaling around 3 billion crowns ($445.39 million).  SAS, which made a 1.6 billion crown pretax loss in 2011, has been struggling for years against cut-price rivals such as Ryanair, industry overcapacity and more recently high jet fuel costs and an economic slowdown.


Banks give nod to turnaround plan from airline SAS 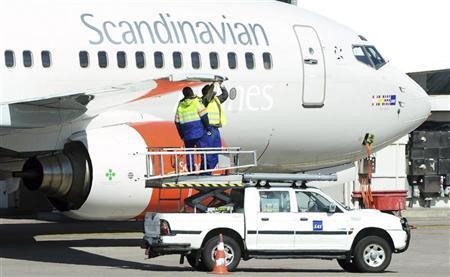 The airline, in which Denmark, Norway and Sweden own a combined 50 percent stake, has been in talks with banks on securing financing to roll over debt coming due next year.

On Thursday, it postponed its third-quarter results, saying it was delaying publication until negotiations on efforts to ensure its survival had been finalized.

It has however already published preliminary figures showing it made a pretax profit of 568 million crowns in the third quarter.

But the airline has not made a full-year profit since 2007 and has said its turnaround plan is expected to yield approximately 3 billion Swedish crowns ($445.39 million) in earnings before tax. It also aims to sell assets totaling around 3 billion crowns.

A source told Reuters last week SAS is looking to sell its Ground Handling unit. Media have also reported the airline’s frequent flyer scheme, Eurobonus, is up for sale.

The cost cutting plan to be announced on Monday would see over 1,000 job cuts and pay cuts of 15 percent, TV2 said.

SAS in Denmark declined to comment on the report, and the union was not available for comment.

The European Commission has had informal contact with Scandinavian governments in recent days about airline SAS , but has not received any request to permit state aid for the carrier, a Commission spokesman said on Friday.

(Reuters) – Loss-making Scandinavian airline SAS said it will slash costs and sell assets to secure its future following media reports it was in financial difficulties.

SAS, which made a 1.6 billion crown pretax loss in 2011, has been struggling for years against cut-price rivals such as Ryanair, industry overcapacity and more recently soaring jet fuel costs and an economic slowdown.

SAS, part-owned by Norway, Sweden and Denmark, said it was working on a plan that would cut costs, reduce complexity and ease the effect of a possible equity writedown due to pension accounting changes.

The move comes as rivals, such as Deutsche Lufthansa and Air France-KLM, have also embarked on cost cutting programmes, trimmed profit forecasts and slashed plans to expand capacity and fleets.

SAS’s latest plan will keep it flying for a while, but analysts believe the airline only has a long-term future as part of a bigger alliance.

“The problem for now is that there isn’t anyone willing to acquire it,” said Jacob Pedersen, analyst at Sydbank. “I expect SAS to survive as a company, but it will be a bumpy road.”

The airline said it made a third-quarter pretax profit of 568 million crowns, bringing forward its results after reports it was in financial trouble led to a suspension of share trading.

Shares in SAS, which has not made a full-year profit since 2007, rose 18 percent to 6.90 crowns after trading resumed.

SAS said the plan is expected yield approximately 3 billion crowns in earnings before tax, adding it will also sell assets totalling around 3 billion crowns, but provided no further details.

The airline said it was currently in negotiations regarding the extension and amount of its revolving credit facility.

SAS said it had liquid funds of 2.4 billion crowns and available credit facilities of 4.7 billion crowns, which will expire in June 2013.

SAS, which faces a hit to shareholder equity of up to 10.7 billion crowns when new pension accounting rules are introduced in November 2013, is not the only airline to be suffering.

In August Cathay Pacific Airways posted its worst first-half loss since 2003, and International Airlines Group, the owner of British Airways and Iberia, reported a group operating loss of 253 million euros in the six months to the end of June.

The International Air Transport Association (IATA), which represents about 80 percent of global carriers, expects the $630 billion airline industry to make a net profit of $4.1 billion this year, up from an earlier forecast of $3 billion but still less than half the $8.4 billion achieved in 2011.