London Heathrow was the busiest airport in the EU-27 in terms of passenger numbers in 2010 (65.7 million), followed by Paris’ Charles-de-Gaulle airport (58.0 million), and then Frankfurt airport, Madrid’s Barajas airport and Amsterdam’s Schiphol airport (all with between 52.6 million and 45.1 million passengers) – see Figure 2.

With the exception of Barajas, the overwhelming majority (at least 88 %) of passengers through the other four largest airports in the EU were on international flights. In contrast, national (domestic) flights accounted for 37.7 % of the passengers carried through Barajas in 2010. There were also relatively high proportions of passengers on national flights to and from Paris Orly (53.0 %), Barcelona airport (39.9 %) and Roma Fiumicino (35.2 %).

The United Kingdom reported the highest number of air passengers in 2010, with almost 193 million or 3.1 passengers per inhabitant (which was approximately double the EU-27 average). Relative to population size, the importance of air travel was particularly high for the popular holiday islands of Cyprus and Malta (8.7 and 7.9 passengers carried per inhabitant).

[Anna Aero says passenger numbers handled at Europe’s airports in 2010 grew by around +4.2%.]

Air transport statistics concern national and international transport, as measured by the number of passengers carried; information is collected for arrivals and departures. Air passengers carried relate to all passengers on a particular flight (with one flight number) counted once only and not repeatedly on each individual stage of that flight. Air passengers include all revenue and non-revenue passengers whose journey begins or terminates at the reporting airport and transfer passengers joining or leaving the flight at the reporting airport; but excludes direct transit passengers. Air transport statistics are collected with a monthly, quarterly and annual frequency, although only the latter are presented in this article. There are also air transport passenger statistics on the number of commercial passenger flights made, as well as information relating to individual routes and the number of seats available. Annual data are available for most of the EU Member States from 2003 onwards 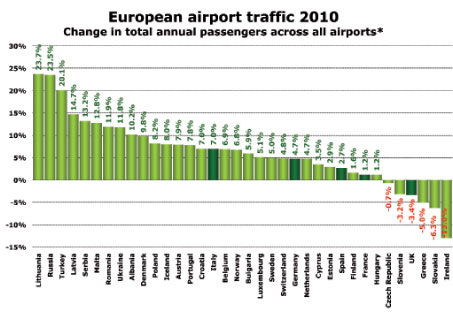 The World Bank has figures, country by country, of air passengers, However, these are very incomplete as though it contains both domestic and international aircraft passengers  – they are only for air carriers registered in the country.

The figures below, from Nation Master, also only include the passengers flying on airlines registered in the country.  So figures for the UK are very much too low.  However, they give a general impression of the extent of air travel activity per country.


and figures in [  ] brackets from detailed  European data from Anna Aero at http://www.anna.aero/european-airport-traffic-trends/