WWF and the AEF (Aviation Environment Federation) disagree with the CAA arguments of needing more airport capacity in the south-east. A recent WWF report shows that there is enough capacity in the south-east and other regions to meet demand, in line with the recommended limits on aviation growth laid down by the Committee on Climate Change (CCC) to ensure the sector plays a role in limiting its carbon emissions. Presuming larger planes in coming decades, for increased efficiency per passenger, it is likely that there would only be perhaps a 1% shortfall in capacity by 2050.  WWF says the CAA and others pressing for more airport capacity should take proper account of the climate implications of their plans. They are just the latest in aviation industry ‘groupthink’ that new runways will magically lift us out of recession.  They will not.

WWF and the Aviation Environment Federation (AEF) have rejected a new report from the Civil Aviation Authority (CAA) that claims new runways are needed in the south-east to meet consumer demand.  (CAA story).   The CAA’s report ignores the advice of the government’s climate advisers, and directly contradicts government policy about making the most of the airport capacity we already have.

According to WWF and AEF’s recent assessment of UK airport capacity, there is already sufficient capacity in the south-east and other regions to meet future demand, in line with the recommended limits on aviation growth laid down by the Committee on Climate Change (CCC) to ensure the sector plays a role in limiting its carbon emissions.

Our analysis shows that a small shortfall in capacity is expected in the south-east, but not enough to require a new runway or airport, especially given the trend towards larger aircraft.

Using BAA forecasts at the Heathrow Terminal 5 inquiry, which show average passenger numbers per aircraft increasing from 143 to 198 over time – and assuming other south-east airports also reflect the trend towards higher passenger loading, albeit to a lesser extent – WWF and AEF concluded that the shortfall in Air Traffic Movements (ATMs) in the south-east by 2050 would be tiny: less than 1%.

Our transport policy expert Jean Leston says: “This report is just the latest in aviation industry ‘groupthink’ that new runways will magically lift us out of recession. It’s time they came back down to earth and thought about the climate impacts of what they’re saying.

“Every time we build more high-carbon infrastructure, such as airports and runways, we’re pushing the world towards dangerous climate change. And we can forget any chance of hitting UK climate targets.”

AEF director Tim Johnson adds: ”I am alarmed that the CAA, who have no official status as aviation policy advisors, are now trying to tell the government what to do. Their calls for more capacity are the latest in industry lobbying that would see us return to the bad old days of unconstrained aviation growth at a time people are flying less and there is spare capacity that could be better used, in the south-east and elsewhere.”

You can…
Find out more about our work to help curb aviation emissions ….  see below …

Moving around a single planet

In the UK, transport accounts for around 28% of our total emissions of carbon dioxide, the main greenhouse gas causing climate change. Living within the limits of a single planet will therefore require changes in the way we currently move ourselves and our goods around the world. 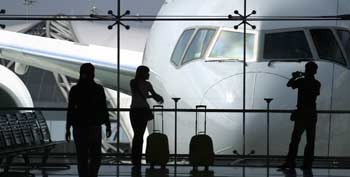 WWF’s One Planet Transport campaign is focused on finding solutions that will help reduce the need for travel and encourage a shift to more sustainable ways of making those journeys that are necessary.

WWF is focusing its work on aviation because:

Join the One in Five Challenge

WWF’s One in Five Challenge aims to galvanise the growing desire among businesses to fly less by providing a focus for flight reduction.