Seven European aviation firms have written to 4 government leaders complaining about the inclusion of airlines in the EU ETS. These include Airbus, BA and Virgin Atlantic. They are arguing now that the ETS threatens jobs. They are concerned about trade retaliation by countries not complying with the ETS. Airbus is claiming the retaliation by  China and the USA is threatening more than 1,000 jobs (at Airbus) and another 1,000 through the supply chain. China had suspended the purchase of planes made by European manufacturers because of the levy. In a draft of the letter seen by the BBC, the companies urge politicians to pursue a “compromise solution”… They now want the ETS to be put on hold until a global plan for carbon emissions is agreed.

Aviation plea to leaders over EU price on carbon 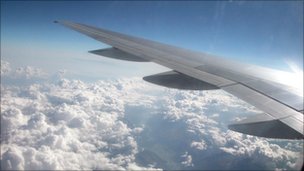 Seven European aviation firms have written to governments complaining about the inclusion of airlines in the EU’s Emissions Trading Scheme (ETS).

The signatories, which include Airbus, British Airways and Virgin Atlantic, argue the move threatens jobs.

They are concerned about trade retaliation by countries not complying with the ETS, which puts a cost on carbon emissions beyond set limits.

China and the US both oppose the move.

“The measure is threatening more than 1,000 jobs (at Airbus) and another thousand through the supply chain,” Airbus chief executive Thomas Enders is quoted as saying.

The boss of EADS, the parent company of Airbus, Louis Gallois told reporters last week that China had suspended the purchase of planes made by European manufacturers because of the levy.

“The ETS issue… is turning into a trade conflict,” an Airbus spokesman told the Financial Times.

In a draft of the letter seen by the BBC, the companies urge politicians to pursue a “compromise solution… which will mitigate third-country concerns whilst protecting the environmental integrity of the EU Emissions Trading Scheme”.

They believe that the proposals should be put on hold until a global plan for carbon emissions is agreed.

“Trying to impose a scheme on flights outside of Europe risks retaliatory action against EU airlines and EU trade at a time when the European economy is under severe pressure,” a spokesperson from BA said in a statement.

“The amount of resistance to the EU’s plans shows that the European Commission needs a Plan B in case there is retaliatory action,” the statement goes on to say.

The European Union has gone it alone with its ETS, which levies a charge on flights in EU airspace based on carbon emissions.

The opposition campaign is being led by Airbus and has the support of the chief executives of British Airways, Virgin Atlantic, Lufthansa, Air France, Air Berlin and Iberia.

By Constant Brand
12.03.2012  (European Voice)
Bosses of major European firms say carbon tax could cost thousands of jobs.
Some of Europe’s largest aviation firms have written to political leaders to warn about the effects of the EU’s plan to bring global airlines into the emissions trading scheme (ETS).The group sent letters to the leaders of France, Germany, Spain and the UK warning them that a trade war was imminent if the EU pushed ahead with the carbon tax.

They said that counter-measures and other restrictions on European airlines “are in preparation” that would have a major impact on the aviation industry. They added that China had suspended a €9.2 billion order for Airbus planes, which they said would threaten more than 1,000 jobs at Airbus and a further 1,000 jobs in related businesses.

The letters were signed by the bosses of Airbus, British Airways, Virgin Atlantic, Lufthansa, Air France, Air Berlin and Iberia. The heads of Safran and MTU, two makers of aerospace engines, also signed the letters.

China, Russia, the United States and other countries have complained about the EU’s plans to include airlines in the ETS, under which they would have to pay for every plane that enters or leaves an EU airport. The Chinese government has already banned its national carriers from participating in the ETS. The US is considering legislation to ban US-based airlines from participating.

The aviation companies said they “fully expect the list of suspensions, cancellations and punitive actions to grow as other important markets continue to oppose [the] ETS”. They added that it was a situation Europe “can ill-afford in the current economic climate”.

The companies urged the political leaders to “urgently request consultations” at EU level and to seek negotiations with China and others that have taken or are threatening action. They suggested the EU call for talks at the International Civil Aviation Organization (ICAO).

“The aim must be to find a compromise solution and to have these punitive trade measures stopped before it is too late,” they said.

“We have always believed that only a global solution would be adequate to resolve the problem of global aviation emissions,” the aviation firms said.

Airbus and six European airlines have written to four EU leaders attacking the carbon tax imposed by the European Union, a source close to the dossier told AFP Sunday.

Plane maker Airbus, British Airways, Virgin Atlantic, Lufthansa, Air France, Air Berlin and Iberia have written to the leaders of Britain, France, Germany and Spain to warn them about its economic consequences, said the source.

They argue the tax could cost them billions of dollars in lost orders and lead to the loss of the thousands of jobs.

“We question the unilateral nature of this measure,” said the source, adding that they wanted talks with all those affected, within the International Civil Aviation Organization (ICAO).

Their initiative was first revealed late Sunday in the Financial Times.

It comes after the head of the Airbus parent company EADS said Thursday that China had blocked purchases of Airbus planes by Chinese companies in reaction to the disputed tax.

According to a report on the website of the French economic daily Les Echos, China’s decision to freeze Airbus orders could cost the European aircraft company up to $12 billion (nine billion euros).

In the letter to Fillon, Airbus chief Tom Enders warned that the tax threatened more than a thousand jobs at the heart of the business and a thousand more in industries supplying Airbus, Les Echos reported.

On Tuesday, the head of the International Air Transport Association (IATA) warned that the EU tax could provoke trade wars.

On Friday however, Denmark’s Climate Minister Martin Lidegaard said the EU would maintain the tax on airlines operating in its airspace so long as an international solution had not been found.

The carbon tax imposed on airlines by the European Union came into effect on January 1, but carriers will begin receiving bills only in 2013 after this year’s carbon emissions have been assessed.

More than two dozen countries, including China, Russia and the United States, have opposed the EU move, saying it violates international law.

But the EU has said the tax will help it achieve a goal of cutting carbon emissions by 20 percent by 2020 and has insisted it will not back down on the plan.

It argues that the cost for airlines is manageable, estimating that the scheme could prompt carriers to add between 4.0 and 24 euros ($5.25 and $31.50) to the price of a round-trip long-haul flight.

China has blocked purchases of Airbus planes by Chinese firms in reaction to a disputed European carbon tax, the head of Airbus’s parent company, EADS, has said.

The EU imposed a carbon tax on airlines which took effect on 1 January.

China has not commented, and it is not clear whether it is official policy or a negotiating ploy, analysts say.

There’s something very, very wrong with the claim being made by Airbus, along with 6 airlines and 2 engine manufacturers, that some A330 orders from Chinese airlines are “not being finalised” because of fears that the EU ETS will have an adverse impact on ticket prices.

Firstly, in January this year, Cathay Pacific’s CEO estimated that a one-way ticket from Hong Kong to Europe could go up by HK$50 or £4.11 pence. This will have absolutely zero impact on traffic and will be passed on to passengers in any event. A return ticket would therefore face an £8.22 pence surcharge – EU ETS costs will clearly not mean the end of air travel between Europe and China.

Secondly, there are 854 A330’s currently in service, with a 335 production backlog – they are built at a rate of 9 per month. Just like Boeing, Airbus requires a 5% deposit, often with further staged payments, as aircraft are built. Airlines order new aircraft to fit their acquisition/fleet commonality and replacement plans, alongside route development and growth forecasts. Production line slots will not easily be given up on a whim, particularly when switching to a rival manufacturer could be hugely problematic and very costly.

More importantly, the 5% deposits are also non-refundable. An A330 has a variant-dependent list price between US$200 to 225 million. Are we seriously meant to believe that Chinese airlines are prepared to throw away millions of dollars in forfeited deposits over a few pounds per ticket ETS surcharge? I don’t think so.

So what’s going on? It’s simple really: airlines and aerospace manufacturers despise the EU ETS and will go to any lengths to collapse the scheme, hence this kind of PR-inspired political pressure. It seems Airbus do not only make aircraft – they can also manufacture stories.

What a wonderful exercise in double think – they urge the EU to suspend the ETS so that its environmental aims can be fulfilled through a global agreement, Thus the airlines are pretending to be eager for a solution that reduces emissions while at the same time doing everything they can to make sure there never is such a global agreement.

It is clear to me that this always was the airlines’ game plan – and that going along with the ETS initially allows them now to permanently derail it while not looking like the bad guys.