Ryanair cuts 8 routes from Edinburgh airport and 4 from Liverpool

Ryanair is cutting some of its operations at Edinburgh Airport.  It will close 8 routes and 60 weekly flights from October 2012.  Winter routes affected include Bratislava, Bremen, Frankfurt, Fuerteventura, Gothenburg, Kaunas, Lodz and Poznan. In February, Ryanair cut five routes from its summer schedule, after a breakdown in talks with BAA over airport charges – which it wants lowered. Ryanair claimed the latest cuts would see Edinburgh Airport traffic fall by 500,000 passengers a year and lead to the loss of up to 500 “on-site” jobs.   Ryanair  says APD is causing it to cut flights from Liverpool to Milan, Rome and Rimini, all in Italy, throughout summer, and Almeria – and cut the frequency of others. Strange that a £13 tax has that effect, when Ryanair happily adds so many other charges, such as €20 per kilo of extra luggage, and €60 for not checking in online. 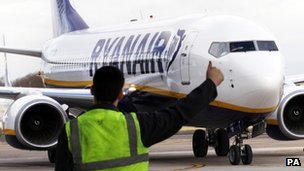 The budget airline said it would close eight routes and 60 weekly flights from October 2012.

In February, Ryanair cut five routes from its summer schedule, after a breakdown in talks with operator BAA over airport charges.

The airline claimed the latest cuts would see Edinburgh Airport traffic fall by 500,000 passengers a year and lead to the loss of up to 500 “on-site” jobs.

Ryanair warned that deeper cuts to its winter schedule “may be inevitable” if BAA Edinburgh failed to agree an extension to a five-year base agreement, which expires in October 2012, on more competitive terms.

Deputy chief executive Michael Cawley said: “Ryanair regrets BAA Edinburgh Airport’s rejection of our proposals for a competitive cost base which would allow Ryanair to further grow our traffic and routes for winter 2012 and beyond.

“Sadly, BAA Edinburgh seems to prefer higher costs, even if it means fewer passengers and jobs at Edinburgh.”

Mr Cawley said that Ryanair remained committed to Edinburgh Airport, with 1.3m passengers and 17 routes planned for next winter.

But he added that “the BAA Edinburgh monopoly cannot continue to ignore the competitive marketplace, where airports all over the UK and Europe have been reducing costs and lowering charges in return for traffic growth”.

Mr Cawley said he hoped there was a way to reverse the airline’s cuts “to ensure further Ryanair growth” at Edinburgh.

Edinburgh Airport managing director Jim O’Sullivan said: “Of course we are disappointed that Ryanair has announced that it will reduce its services from Edinburgh.

“It was expected as we saw similar cuts in last year’s winter schedule.

“The numbers quoted on any passenger and job impacts are speculative and we look forward to further negotiations with Ryanair once the sale of the airport is concluded.

“However, our position remains the same. We have tried extremely hard to negotiate with Ryanair but sadly on many issues have not been able to find common ground.”

He added: “We continue not to be able to accept their wish to not pay the agreed air traffic control costs that all other airlines pay.”

Transport Minister Keith Brown said: “We are disappointed by the announcement that Ryanair is cutting further services from Edinburgh Airport and, while there are obvious differences, we note that there remains a willingness from the airport and the airline to continue discussions.

“I would encourage both parties to do what they can to seek a solution which is good for them and is good for passengers.”

BAA is selling Edinburgh Airport following a decision by the Competition Commission, with final bids due to be lodged later this month.

The airline insisted the increase in Air Passenger Duty (APD) was the main reason for the cuts, while industry observers also pointed to recent sharp increases in the cost of aviation fuel.

The low-cost carrier has decided to axe flights to Milan, Rome and Rimini, all in Italy, throughout summer.

Pisa is now the only Italian city served by Ryanair flights to Liverpool.

Flights to Almeria, in Spain, were also chopped and the frequency of flights on other routes pared back.

Passengers who had already booked seats on fights which have been cancelled are being offered the choice of a full refund or a free switch to an alternative route.

Ryanair spokesman Stephen McNamara said: “As the UK government has increased APD, yet again we were forced to close Liverpool routes to and from Almeria, Milan, Rimini and Rome from April and reduce frequencies on a number of other routes.

“UK APD is now the highest passenger tax in Europe, making the UK significantly uncompetitive with other EU countries which have axed taxes and reduced access costs to promote tourism and jobs.”

How to Ryanair charges compare to APD ?

Ryanair’s complaints about the impact of Air Passenger Duty on passengers (APD is £13 per passenger for a return flight to a European destination) compared to other charges that Ryanair imposes.

Some of these are (from http://gospain.about.com/od/ryanair/tp/ryanair_fees.htm )

Like all budget airlines, Ryanair keeps costs down by charging you for extra services. But no airline piles on the extras like Ryanair.

How does Ryanair compare to easyJet? Throughout this article, I have added the easyJet equivalents so you can see for yourself the difference between the two airlines.

The Ryanair fee that the most people fall foul of. Everyone who flies with Ryanair has to check in online. That’s right: everyone. You. Must. Check. In. Online. Lots of people forget and are forced to pay a ‘boarding pass reprint fee’. Oh yeah, did I tell you? Check in online!

Even if you have printed your boarding card, you may still be fined. Reasons I have heard of include:

Note that Ryanair has started putting an advertisement pop-up over your ticket when you first view it online. You must exit this before you print.

Ryanair’s highest fee, so worth drawing a lot of attention to. If you misspell your name by one letter, or even if you write ‘Rob’ when your passport says ‘Robert’, you’ll be charged when you reach the airport.

How Much You Could Pay
160€ per person if paying at the airport.

If you notice before you get to the airport that your name is entered wrong, the charge is ‘only’ 110€.

All airlines charge for excess luggage, but Ryanair has the lowest baggage allowance in Europe (15kg) and the highest excess luggage fee too.

easyJet equivalent fee easyJet has no maximum weight for hand baggage. Their excess weight is 12€ per kilo, or 21€ per 3kg when booked online. See more: Ryanair v easyJet

Ryanair is almost unique in allowing hand baggage of just 55cmx40cmx20cm (the vast majorit of airlines allow 56cmx45cmx25cm). So if you take your usual hand luggage bag, Ryanair may force you to check it into the hold.

Furthermore, at many airports, if you buy from the airport shops before boarding, Ryanair will charge you if it doesn’t fit in your single piece of hand luggage.

See some surprising photos that show how anyone could get caught out by Ryanair: How Strict is Ryanair’s Hand Baggage Allowance?

If you’ve already reached your checked-baggage allowance of 15kg and are forced to check in your 10kg hand luggage, you’ll have to pay 200€ to do so (20€ per kg).

easyJet equivalent fee No equivalent. easyJet’s baggage dimensions are the industry standard and they have no weight limit for checked luggage. See more: Ryanair v easyJet

At the time of writing, Ryanair has 36 checked baggage fees (you can see them all here:Official Ryanair Charges Table).

How Much You Could Pay

Many budget airlines charge for the use of a credit card, but only Ryanair charges per person, per flight.

How Much You Could Pay
Ryanair’s credit card fee is 5€ per person per flight. This means a family-of-six on a return flight will pay a collosal 60€ just in credit card fees.

How to Avoid This Ryanair Charge
The only way to avoid this is to obtain a Ryanair-branded Prepaid Mastercard (a new policy as of November 2011). Visa Electron Cards used to get around this fee, until Ryanair changed to Prepaid Mastercards in late 2009 and then to their own card in 2011. How long will the latest measure last?

“Would you like to be one of the first passengers to board to the aircraft?” Ryanair asks when you book your flight. Unfortunately, Ryanair does not actually always offer this service, even when you’ve paid for it. Find out in what circumstances Ryanair fails to provide this service here: Ryanair’s Priority Boarding Fee.

In an email to me, Ryanair’s head of communications, Stephen McNamara, described this breach of contract as ‘a trivial, non-issue’.

How Much You Could Pay
Just 5€ per person. But it’s the principle, right?

Ryanair’s travel insurance is a lot more expensive than that offered by most insurance companies, while its cover is considerably less comprehensive. Which?, a British consumer rights publication and website, has a page on Suggested Minimum Travel Insurance Requirements. Ryanair’s insurance falls well short of this. For example, Ryanair’s policy only offers 50,000€ of medical cover; Which? recommends a minimum of two million pounds.

easyJet equivalent fee Yes, they have their own travel insurance. No, you shouldn’t buy it. So it doesn’t matter how much it costs, does it? See more: Ryanair v easyJet

Ryanair’s baggage-drop desks are known for their long lines. In an extreme case, Ryanair opened just 11 check-in desks for 255 flights. If you don’t check in in time, you’ll be denied boarding.

If you are a non-EU citizen, you also need your boarding card stamped by the Ryanair Visa/Document Check Desk.

If you are a UK citizen and you don’t have a passport, you can’t fly with Ryanair, even within the UK.

These aren’t legal requirements, just hoops Ryanair requires you to jump through. If you don’t, you may be denied boarding. More: Denied Boarding by Ryanar – the Reasons

How Much You Could Pay
If you can’t board, you’ll pay a 55€ flight change fee and price difference.

easyJet equivalent fee 48€ and the difference, but the chances of this happening to you with easyJet is much lower. See more: Ryanair v easyJet

A recent study found that Ryanair charges most for snacks out of all British and Irish airlines. Can you last a five-hour flight from Edinburgh to Tenerife without refreshments?

easyJet equivalent fee All air food is expensive, but easyJet’s costs less than Ryanair, with water at a fair price. Interesting, the currency conversion on easyJet flights between British pounds and euros is way off – if you have pounds left, bring them on your plane. See more:Ryanair v easyJet