Boeing in cooperation with Air China and PetroChina, will press ahead with a 2nd test flight that will be partly powered by jatropha. The flight will be in the last quarter of 2012, and be a trans-Pacific trip, far longer than the one-hour test flight that was conducted in China last October. That flight used 50% jatropha based fuel. China wants to produce more jet fuel from jatropha, which it claims can be produced from large areas of “barren land” where it might grow.  The aim of the biofuel flight is to prove that a China-produced biofuel works, and to ensure “regulators and airlines around the world are comfortable using it for commercial flights.” 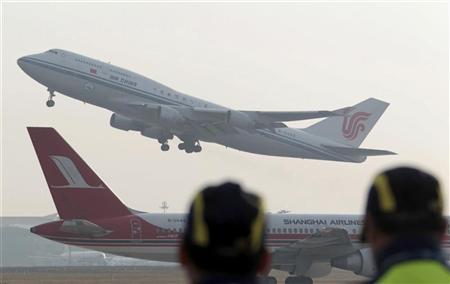 (Reuters) – Boeing Co., in cooperation with Air Chinaand PetroChina, will press ahead with a second test flight that will be partly powered by plant oil, company executives said this week.

The test, scheduled for the third quarter of this year, is likely to involve a trans-Pacific trip, far longer than the one-hour test flight that was conducted in China last October, said Stephen Emmert, Boeing’s regional director of the biofuel strategy team for China and North America.

The project aims to prove that a China-produced biofuel works, and to ensure “regulators and airlines around the world are comfortable using it for commercial flights,” he said.

The planned test, like last year’s, will involve use of a biofuel produced by PetroChina  from locally grown jatropha, a thorny green shrub. Jatropha based fuel, produced with oil extracted from seeds, could have particular appeal in China, where there are huge swathes of barren land that could be turned to growing the plant.

“China has a need (for cleaner fuels) like the rest of the world that is very real,” said Marc Allen, head of Boeing’s  China operations, speaking on the sidelines of the International Air Transport Association meeting in Beijing this week.

“They have (economic) scale that many parts of the world cannot match. And they have fast growing technological capability that will allow them to be on the forefront on these initiatives.”

Is jatropha a real solution, or does it create more problems?

16.2.2012A new report by Friends of the Earth Netherlands, and Friends of the Earth Indonesia investigates the situation in Java, where jatropha and other crops are being grown to produce biokerosene for Lufthansa’s “Burn Fair” programme.  The report finds that Javanese farmers and workers have converted some of their land from food to fuel crops, in return for ridiculously low payments. They have had a fall in income, conflict and frustration. Indonesian farmers feel the lifeblood of Indonesia will be tapped for the benefit of wealthier people in Europe and elsewhere. Biofuel crops are putting pressure on land for food. The report says this growing of biofuels for aviation fuel is putting a double pressure on the poor in the global south: both in climate change and food prices.https://www.airportwatch.org.uk/?p=8153

Earlier news on this:

An Air China Boeing 747-400 took off from the Beijing airport, flew for 2 hours, and landed back at Beijing. It used 50% jatropha.  This is one of a series of research projects launched last year by the US and China, the world’s two biggest oil consumers. The fuel was developed by Boeing, Honeywell UOP, Chinese oil company PetroChina and Air China. They say a commercial biofuel should be available in three to five years. BEIJING  29.10.2011  (Business Week)

A jumbo jet powered by fuel made from oily nuts has made a two-hour test flight
in Beijing as part of a U.S.-Chinese renewable energy partnership.

The fuel for Friday’s flight is one of a series of research projects launched
last year by the United States and China, the world’s two biggest oil consumers.

On Friday morning, an Air China Boeing 747-400 took off from the Beijing airport
and flew as officials watched. It landed at the same field.

The companies say such biofuel could be commercially available in three to five
years.

A Boeing jumbo jet powered by fuel made from oily nuts made a two-hour test flight
Friday as part of a U.S.-Chinese renewable energy partnership partnership…

By The Associated Press

BEIJING — A Boeing jumbo jet powered by fuel made from oily nuts made a two-hour
test flight Friday as part of a U.S.-Chinese renewable energy partnership.

The fuel, based on the oily nuts of the jatropha tree, is one of a series of
research projects launched last year by the United States and China, the world’s
two biggest oil consumers. The two governments say they want the research to reduce
pollution and spur the growth of new industries.

The fuel was developed by Boeing, Honeywell UOP, Chinese oil company PetroChina
and Air China. They say a commercial biofuel should be available in three to five
years.

Government and company officials watched as an Air China Boeing 747-400 powered
by a mix of half biofuel and half standard aviation fuel took off from the Beijing
airport and flew for two hours before landing at the same field.

“This is a very important step. It is a milestone for the Chinese airline industry,”
said He Li, an Air China vice president. “It will help us a lot to reduce carbon
emissions and provide us more choices for aviation fuel.”

Boeing said earlier that the goal of the research is to develop biofuel that
can be used in commercial jetliners with no engine modifications. The company
said last year four test flights with biofuel had been flown in the United States.

Boeing Co., in cooperation with Air China Ltd. and others, plans to test a commercial-jet
biofuel in China produced from a locally grown plant by the middle of 2011-part
of an effort to commercialize cleaner fuels world-wide and bolster China’s potential
as a biofuel provider.

Boeing first tested a biofuel on a Virgin Atlantic Boeing 747 jet in early 2008
in London.   It has since conducted similar tests a few more times, each time experimenting

with different types of biofuels on different engines. The China demonstration flight, expected to be conducted by May or June next year, would be Boeing’s sixth such demonstration flight using a biofuel, said a Boeing executive, Al Bryant, in an interview Monday with The Wall Street
Journal.

The biofuel to be used in the scheduled test flight is one based on jatropha, a thorny wild green shrub that grows well on a wide range of terrains in hot climates such as Latin America and Africa.  It is expected to be supplied by Chinese oil company PetroChina Co., which grows jatropha in southern China for aviation use, said Bryant, vice president
of research and technology at Boeing’s China operations.

“It’s harvested here and processed here, and we test it with an airplane operated
by a Chinese airline and is going to be flown here in China,” the executive said. “This flight is going to demonstrate that China has the ability to create a new biofuel industry here in China.”

Analysts say development of biofuels based on feedstocks such as jatropha looks
promising, but commercial mass production, as well as getting regulatory approvals
for the new jet fuel, still will likely take several years, if not more.     Boeing argues the prohibitively expensive cost will come down.

Some pessimists also had pointed out that biofuel would freeze before a jetliner
reached cruising altitude, or that it would require punishingly costly modifications
to the aircraft engines to make it work.

Boeing says its two years of demonstration flights counter those claims. By injecting
similar additives used in petroleum-based fuel, the freezing point of biofuels
has been rendered a nonissue, and engine modifications have proven unnecessary,
Boeing says.

“We’re focused on plant-based sustainable ‘drop-in’ biofuels so that you can
fly to Chengdu, fill up with a biofuel, and fly to Australia somewhere and fill
up with a petroleum-based fuel, and you don’t have to clean the tank or drain
it or anything,” Bryant said, referring to a major city in southwest China.   “No
modifications to the airplane engines would be necessary. It is a drop-in solution.”

Moreover, with fears that the days of petroleum are numbered, the global aviation
industry is more inclined to pursue long-term diversification of its raw materials.
Breakthroughs have also come more quickly than people anticipated.

“If we can do that  – commercialize biofuels for aviation –   that gives our customers
an alternative supply of fuel, and hopefully we could smooth out some of the spikes
in jet fuel prices and allow airline operators to be more financially stable,”
Bryant said.

Boeing envisions a future, he said, where the entire global aviation industry
would be supplied with plant-based biofuels that don’t compete with food for land
and water, so that a rapid adoption of biofuels by the aviation industry doesn’t
drive up food prices.   That future could come as early as 2025, Bryant said.

To realize that vision, Bryant said the industry needs to make a lot of technological
breakthroughs. But one secret weapon, he said, is biofuels based on algae, which have higher levels of energy density.  Boeing is conducting some of its
research-and-development efforts in China in part because the country, Bryant
said, has done some “leading-edge” research in the field.

To accelerate the research and development of such algae-based aviation biofuels,
Boeing earlier this year opened a joint research laboratory in Qingdao with a
Chinese government research institute and is looking at expanding the effort to
other labs.

Edit this entry.26.5.2010  (Reuters)China will launch its first flight using aviation biofuel this year after signing
an agreement with U.S. aviation giant Boeing in Beijing on WednesdayAt a ceremony after the U.S.-China Strategic and Economic Dialogue meeting, Boeing
agreed to collaborate on the launch with carrier Air China (0753.HK) and oil major PetroChina (0857.HK), which will provide the jatropha-based fuel feedstock for the project.

Al Bryant, vice-president of Boeing’s research and technology department in China, told reporters the new fuel was expected to be commercially viable within three to five years.

“We believe in three to five years we should see a portion of fuel in commercial
aviation (using biofuel), but a lot has to be done,” he said.

“We’ve proven it can be flown and it is a matter of scaling it up to make it
commercially viable.”

Four test biofuel flights have already been conducted in the United States, and
Bryant said China was now the focus of development because “they have made the
decision to move faster”.

Aviation is responsible for about 2 percent of total global greenhouse emissions,
and the entire industry aims to become carbon neutral by 2050 through the use
of alternative fuels.

China aims to replace at least 15% of total diesel and gasoline consumption with
biofuel by 2020.

It has a number of pilot ethanol fuel projects in the farming belts of central
and northeast China, but it has been wary of traditional processing methods because
of concerns about food security and the impact on grain prices.

After banning the use of corn and edible oil in 2006 and suspending all new licenses
for bioethanol projects in 2007, China is focusing on new-generation variants
processed from agricultural waste, cellulosic materials or hardy but inedible
oil-bearing plants like jatropha.

“The United States relied on corn to produce biofuel but relying on crops has
been criticised, and second-generation biofuels are more significant for China,”
said Zhang Guobao, head of the country’s National Energy Administration.