A Senate committee has passed a bill authorising the transportation secretary to bar US airlines from complying with the ETS if he or she deems this to be in the public interest. It will now be sent to the full Senate for a vote. The 19-member panel voted to approve an updated version of a bipartisan bill authored by Republican Senator John Thune and Democratic Senator Claire McCaskill. They want this to apply more pressure on the EU to stand down from what they say is “a misguided and unlawful tax” and claim the money spent in paying for carbon emissions could “otherwise be invested in creating jobs and stimulating economic growth in our country.”  It will require the secretary to hold a public hearing before implementing any ban, and also “to pursue a worldwide approach” to address aircraft emissions  (ie. the glacially slow, and so far utterly ineffective ICAO process).

by Suzanne Goldenberg, US environment correspondent 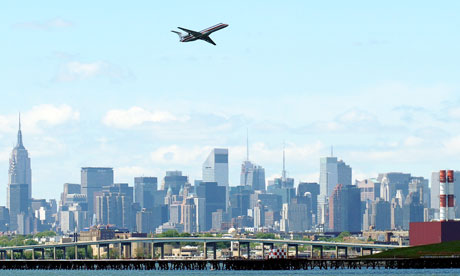 Congress may order US airlines not to pay the emission charge. Photograph: Justin Lane/EPA

Congress threatened to bring chaos to European Union airports on Tuesday, moving towards a vote on a measure that would ban US carriers from paying for their carbon emissions.

The Senate’s commerce, science and transportation committee cleared the way for a floor vote on a bill that would make it illegal for US carriers to comply with new EU legislation requiring airlines that use European airports to pay for carbon emissions. The measure has already been approved by the House of Representatives.

In Washington’s deeply divided political climate, opposition to the EU’s aviation scheme remains one of the only areas where Republicans and Democrats agree.

Both parties supported the moves in Congress, and the Obama administration has also been putting pressure on Europe to back down and leave it to the International Civil Aviation Organisation to take measures to reduce carbon emissions.

The Department of Transportation on Tuesday began two days of talk with 16 other non-European countries opposed to the EU law, aimed at trying to get the ICAO to enact a global solution.

American and Asian airlines have said the European emissions scheme is unfair because it counts the entire time the aircraft is in the air – not just the time over European countries.

A senior administration official briefing reporters on Monday said, however, that any overall solution must involve setting aside the application of the European Union scheme.

“If the EU can go and impose their own system around the world in this way, there’s nothing to say that five or 10 or 20 other countries wouldn’t do the same thing, and I think that creates a risk which is very much a concern, I think, of airlines around the world, that you end up with a kind of patchwork system of different mechanisms, different taxes, and different kinds of policies.”

However, the ICAO has only until next April to come up with an alternative before the EU begins enforcing payment on emissions.

John Kerry, who had fought the measure on Tuesday, warned that the US was risking a trade war unless American carriers take steps to reduce emissions. “Other places are going to say we don’t want your planes to land here if you are not doing anything,” he told the hearing, according to The Hill newspaper.

“We can sit here literally at our economic and security peril, succumbing to the idea that saying the word climate change is a bad idea to American politics,” Kerry went on.

“The effect of that is to have stalemated the United States to our loss in the market place and to a our loss in the forefront of energy policy and other things that matter to us.”

A Senate committee passed a bill on Tuesday 31st July  authorising the transportation secretary to bar US airlines from complying with a European Union law that requires them to pay for carbon emissions on flights to and from Europe.

The measure approved by the Senate Commerce Committee will be sent to the full Senate for a vote.

Thune called on the Senate to pass the bill immediately to apply more pressure on the EU to stand down from what he called a misguided and unlawful tax.

“More than USD$ 3.1 billion will be wrapped up in new taxes between 2012 and 2020 that could otherwise be invested in creating jobs and stimulating economic growth in our country,” Thune said.

Democratic Senator Barbara Boxer, a long-time advocate of mandatory curbs on carbon emissions and author of several cap-and-trade bills, said she and fellow Democratic Senator John Kerry would back the measure after Thune included compromise language.

The Thune-McCaskill bill directs the secretary of transportation to prohibit US airlines from participating in the EU trading scheme to curb carbon emissions if he or she deems it in the public interest.

Thune added compromise language that would require the secretary to hold a public hearing before implementing any ban. It would also require the secretary and other relevant transportation officials to conduct international negotiations “to pursue a worldwide approach” to address aircraft emissions.

“Initially I wasn’t going to support the Thune-McCaskill bill,” Boxer told the committee, noting that she and Kerry changed their minds after negotiating the text with the Republican senator.

“It (the bill) makes it clear that the place for dealing with this whole issue is an international organisation that is already set up,” referring to the ICAO, she said.

The US Department of Transportation and State Department are hosting talks on Tuesday and Wednesday with 16 other countries that oppose the EU’s trading scheme to find a global alternative under ICAO.

Kerry, who also announced his support for the bill, warned if ICAO does not come up with an alternative solution soon “we are headed for a trade war.”

Senator Kay Bailey Hutchinson of Texas, the senior Republican on the committee, said the EU trading scheme represents the “unilateral taxation of US companies and citizens.”

She said the bill is a “consensus plan that takes into account economic realities.”

Annie Petsonk, international counsel at the Environmental Defence Fund, said although the bill made some compromises and encouraged international cooperation, the work of ICAO has been too slow.

“We’ve been in hot pursuit of this (an ICAO framework) for 15 years, so what makes the Senate think this is any different?”

The revisions essentially smoothed over any Democratic objections to a bill
(S. 1956) that attempts to shield U.S. airlines from having to purchase
emission allowances under the EU Emissions Trading System for U.S. flights
arriving in or departing from Europe.

The committee’s approval of the substitute amendment, offered by bill author
Sen. John Thune (R-S.D.), moves his European Union Emissions Trading
Scheme Prohibition Act of 2011 significantly closer to a Senate floor vote in
the months ahead.

Sen. Barbara Boxer (D-Calif.), who chairs the Senate Environment and Public
Works Committee and is a longtime advocate of global climate action, praised
Thune’s compromise effort, saying the change “makes it clear that the place
for dealing with this whole issue is an international organization that is
already set up” to negotiate an agreement on air sector greenhouse gas
emissions, the International Civil Aviation Organization.

Separately, a coalition of U.S. airlines and aviation industry organizations has
asked the U.S. government to take action to reverse the EU decision to
include aviation emissions in its cap-and-trade system.

“I think moving it fast is critical because it will send the message to [ICAO] that we want to deal” with air sector emissions through it as soon as possible, Boxer said.

Thune’s substitute retained language in the bill directing Obama administration officials to engage in negotiations to ensure aircraft operators “are held harmless” from EU retaliation or penalties for failing to comply. But his substitute also directed U.S. negotiators to “use their authority to conduct international negotiations, including using their authority to conduct international negotiations to pursue a worldwide approach to address aircraft emissions”—a change that swayed committee Democrats to support the measure.

Hearing Would Be Required

The Senate measure is unlikely to be taken up at least until the chamber returns from its August recess.  But Thune urged Commerce Committee Chairman Jay Rockefeller (D-W.Va.) to report the measure as soon as possible to enable floor consideration in the months ahead.

Thune’s substitute amendment also added language directing the transportation secretary to take several factors into consideration before shielding U.S. airlines from the EU carbon caps and requiring the secretary to hold a public hearing before acting.

Another change would have the secretary consider whether blocking the EU plan would be in the public interest, in part by determining how it would affect U.S. consumers and U.S. air carriers as well as impacts “on the economic, energy, and environmental security of the United States,” and on U.S. foreign relations and existing international commitments.

Environmental groups oppose legislative attempts to halt the EU plan, noting that the air sector’s carbon dioxide emissions are projected to increase substantially over the coming decades. Fifteen environmental groups recently sent a letter to all U.S. senators urging them to reject the legislation, arguing that “action by the EU is a sensible first step” in the absence of a global agreement on aviation emissions.

But only one Democrat on the commerce panel, Senate Foreign Relations Committee Chairman John Kerry (D-Mass.), offered dissenting comments at the markup, although Kerry did vote along with all other committee members to report Thune’s measure.
Kerry, who led a failed effort to secure Senate passage of a U.S. climate bill in 2010, said he was “totally puzzled and confounded” that the Senate is now focused only on the narrow issue of how the EU Emissions Trading System impacts U.S. airlines and not on the broader threat of global climate change.

The United States continues to ignore the challenges of climate change at its own peril and is “succumbing to the complacency of saying that climate change is a bad word in American politics,” Kerry said.

Kerry and Boxer, in a July 31 letter to U.S. Special Envoy for Climate Change Todd Stern, called for renewed pressure to get ICAO to adopt a framework for a global aviation agreement by the fall of 2013.

Emissions from the air sector are expected to at least double by 2050, they wrote, while other projections show them quadrupling over that period.

ICAO has been criticized for failing to produce a global agreement to curb aviation emissions. Its slow pace was one reason the European Union took action to address air sector carbon dioxide emissions through its Emissions Trading System.

The Obama administration has not taken a formal position on the Senate bill, although top officials have urged the European Union to abandon its inclusion of foreign air carriers in its emissions trading program.

EU Says Costs Would Be Minimal

To comply with the EU Emissions Trading System—which extends a carbon trading system for power plants and manufacturers that was launched in 2005—airlines are to be awarded a free allowance of carbon dioxide credits but must purchase additional credits if their emissions exceed certain caps. Airlines are to begin surrendering allowances to cover their emissions in April 2013.

The European Union has said U.S. airlines would face minimal costs to account for their emissions.  Because the EU plan will provide roughly 85 percent of the allowances to airlines for free, the bloc argues the additional cost for a flight from London to New York would be relatively modest at roughly $3 to $5 per flight (34 INER 768, 8/3/11).

Thune’s bill has significant support from U.S. industry groups, including the U.S. Chamber of Commerce, as well as the Airlines for America, which represents American Airlines, United Continental Holdings, and other domestic airlines.

More information and news on the EU ETS at