Air passengers apparently face higher fares, fewer flight choices and crowded aircraft as European carriers trim seating capacity growth or cut routes, as they try to salvage profits and fend off the impact of rising fuel prices.  Airlines are curbing the growth of capacity  – but it is still growing slightly – and the frequency of some flights to lower costs and not drive away customers already spooked by rising fares. According to the Association of European Airlines, capacity among its member airlines reduced by 4.6% in the first half of 2012 compared with 2011. But there was an increase in seat capacity of almost 23% between 2004 and 2011, driven by new aircraft ordered by airlines when demand was much stronger than it is now. So there is 10 to 20% overcapacity in number of airline seats available in Europe.  Some airlines are retiring older aircraft early, delaying delivery of new planes or selling some smaller aircraft to shrink their fleet. 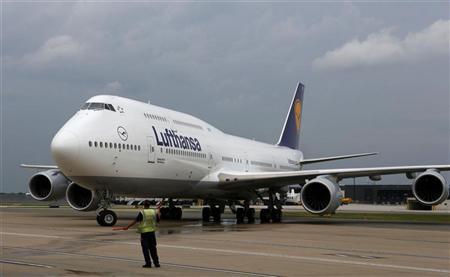 By Rhys Jones and Maria Sheahan

With jet fuel prices near record highs at the same time as taxes and airport charges rise, airlines are curbing the growth of capacity – the number of seats they make available – and the frequency of some flights to lower costs and not drive away customers already spooked by rising fares.

According to the Association of European Airlines, capacity among its member airlines eased by 4.6 percent in the first half of this year compared with the year-earlier period.

But that decline comes after an increase of almost 23 percent between 2004 and 2011, driven by new aircraft ordered by airlines when demand was much stronger than it is now.

“We have 10 to 20 percent overcapacity in Europe, based on the number of seats offered,” Philipp Goedeking, managing director and airlines expert at consultancy AlixPartners told Reuters.

Deutsche Lufthansa (LHAG.DE) for instance added more than 50 percent capacity between 2007, the airline industry’s last peak, and 2011, according to Reuters data, boosted by the acquisition of carriers including Brussels Airlines and Austrian Airlines.

Expansion has slowed dramatically this year, with Lufthansa adding only 2.3 percent capacity in the half of 2012 and British Airways owner IAG (ICAG.L) 2.6 percent. Easyjet added 5.9 percent more seats in the first nine months of its fiscal year.

Some airlines are now retiring older aircraft sooner than planned, delaying delivery of new planes or selling some smaller aircraft to shrink their fleet, but none want to be caught out with too little capacity when demand picks up again.

The airline said it would eliminate loss-making routes and make cuts in jobs and spending, having posted its first annual loss in 17 years.

Most airlines saw profitability – in terms of revenue per seat offered – drop during the global financial crisis as demand for air travel fell faster than they could cut capacity. Since then they have regained ground, but there is concern a further deterioration of European economies will lead to a repeat.

Lufthansa still plans to grow this year but has cut its capacity expansion plans to 0.5 percent from 12 percent. Air France-KLM (AIRF.PA) has also scaled down capacity growth, having already shrunk 20 percent before the crisis.

Many airlines are focusing on axing some of their less- profitable routes, especially short-haul services to secondary cities in Europe, hitting travelers who rely on regional airports – such as Britons with second homes on the continent.

Nicholas Blair, from Leicester in central England, bought a holiday home in the Loire region of western France five years ago, partly because Ryanair had regular flights to nearby Nantes from his local airport. However, the Irish carrier stopped services to Nantes late last year.

“It used to take us four hours door to door flying from East Midlands airport, but now we either have to fly to Dublin and change flights or go to Limoges, hire a car and drive, which makes it so much more inconvenient and much more expensive. One of the reasons we bought the property was because of the convenient and cheap travel to it,” said Blair.

In Britain, regional airports have also had European services cut by airlines because higher airport charges that came into force this year have made it unprofitable for budget carriers to offer short flights to neighboring countries.

They have also been hit by the UK’s air passenger duty (APD) and the winding down of low-cost carrier bmibaby after its parent was bought by IAG. It plans to scrap several Bmi routes – including to Amritsar in India and Casablanca in Morocco – after the summer, due to “poor revenue performance”.

EasyJet recently announced plans to close its base at Madrid airport next year due to a combination of overcapacity, leading to low revenue per passenger, and rising airport charges.

Ryanair routinely justifies route changes with the airport charges and taxes it pays, but it has shifted capacity in recent months from Spain and increased it in faster-growing Poland.

“The major driver is the deals they get from airports, but the economic environment and the nature of the destinations (if it is a sun or city destination) also plays a role,” said Merrion Capital analyst Gerard Moore.

Legacy carriers like BA make most of their profit on long-haul flights and need to offer domestic and European flights to bring passengers to their hubs to fill long-haul seats.

“If 70 to 80 percent of an airline’s passengers are transferring to other flights, you cannot do without feeder flights,” AlixPartners’ Goedeking said.

European airlines, stung by an economic crisis sweeping the continent, are also keen to add services to emerging markets in Asia and fast-growing nations in eastern Europe to tap into growing passenger numbers that can fill up bigger planes.

Data seems to show that airlines’ efforts are paying off to some extent. The passenger load factor in Europe widened to 82.5 percent on international routes in June from 80.6 percent a year earlier, according to industry body IATA.

For domestic flights, the figure improved to 81.6 percent from 79.8 percent a year earlier, showing airlines are offering fewer seats that end up unused. But those figures do not take into account whether airlines are lowering ticket prices to lure more customers onto their planes.

Data from industry bodies IATA and ICAO show average fares globally increasing 1.4 percent between 2005 and 2010, during which time the price of oil – a key factor for airlines costs – rose by more than 40 percent.

Not everyone admits to viewing such trends in a negative light.

“I love price competition,” Ryanair Chief Executive Michael O’Leary said on a recent conference call. “It … means the competition blow their brains out even faster than would normally be the case.”