A YouGov-Cambridge forum poll of voters has shown that 34% believed a new Heathrow runway would help trade, while 34% were more concerned by the potential damage of noise and carbon emissions. By a two-to-one margin of 50% to 25%, Conservatives emphasise the economic gains over the environmental damage. By contrast, Labour voters are slightly more inclined to take the environmental perspective – by a 35%-33% margin – as are Liberal Democrats more emphatically, by 45% to 34%. Of Conservatives, 63% believe airport expansion will cause a great deal or a fair amount of damage, which is less than the 72% of Lib Dems.  New coal power stations are rated as the most damaging, with a score of 48% and expanding Heathrow comes close behind with a score of 43%. 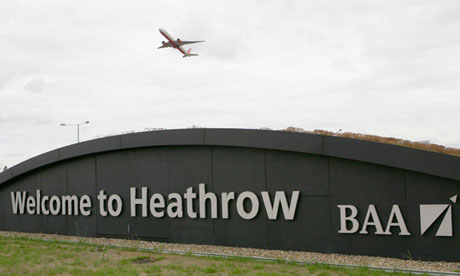 Among all voters, 34% believed a new Heathrow runway would help trade, while the same proportion were more worried about pollution. Photograph: Steve Parsons/PA

Britain is split down the middle on the question of Heathrow expansion – in a manner that reflects political splits in the coalition.

That is the finding of new research prepared for this week’s YouGov-Cambridge forum, at which the Guardian is media partner.

It shows that while 34% of voters believe a bigger airport would “encourage trade, travel and get the economy moving”, another 34% say they are more concerned by the potential damage of noise and carbon pollution.

There is, however, a strong party slant to the figures. By a two-to-one margin of 50% to 25%, Conservatives emphasise the economic gains over the environmental damage.

By contrast, Labour voters are slightly more inclined to take the environmental perspective – by a 35%-33% margin – as are Liberal Democrats more emphatically, by 45% to 34%.

The findings come the week after David Cameron risked the rage of the greener among his Liberal Democrat coalition partners by shunting out a transport secretary, Justine Greening, who was opposed to expanding Britain’s biggest airport, and appointing an environment secretary, Owen Paterson, who has previously spoken out against windfarms and in support of certain fossil fuels.

The poll suggests post-reshuffle tensions at Westminster are mirrored among the two ruling parties’ supporters. The difference is not so much that Conservatives are in denial about the environmental consequences of airport expansion – 63% believe it will cause a great deal or a fair amount of damage, which is less than the 72% of Lib Dems who say the same, but broadly in line with the 66% of voters overall who take this view. Rather, it is that Conservatives appear to give more weight to kickstarting the economy than to the environment.

Respondents were asked to rank various potential investments in energyor the economy for the amount of environmental damage they would do. Voters revealed a hierarchy of polluting policies that fits pretty closely with the green movement’s campaigns. A “net damage score” can be calculated by subtracting the proportion of voters who regard each project as doing little or no damage from the proportion who regard it as doing a great or fair amount of damage.

New coal power stations are rated as the most damaging, with a score of 48 percentage points, and expanding Heathrow comes close behind with a score of 43 points. Easing planning to encourage homebuilding and building new roads come mid-table, with respective scores of 20 and 19 points.

New nuclear power stations have divided environmentalists, with some regarding them as a necessary means of containing climate change and others bitterly opposed. Among the public 51% believe they will do considerable damage, against 36% who expect little or none, to give a net damage score of 15 points.

The High-Speed 2 train line, which is planned to run from London to Birmingham and then eventually to Glasgow, is promoted as a way to encourage the movement of traffic from dirty roads to cleaner rails, but is being resisted by campaigners concerned about the countryside it would cut through. The public give it a relatively low net damage score of five points.

Resistance to windfarms has been growing within the Conservative party, but not – according to the poll – among the public. Only 26% of respondents said they did great damage or a fair amount of it, as against 64% who said they did little or none. That gives a negative net damage score of -38, meaning windfarms are deemed a far cleaner investment than any of the alternative options. Underlying this pattern is, once again, a party divide. While a majority of Tory voters, 58%, do not believe windfarms cause significant damage, a substantial minority of 37% take the contrary view. That compares with far small number of wind sceptics among Labour supporters (19%) and Lib Dems (18%). Conservative modernisers may point to this survey as underlining the political dangers of pandering to anti-windfarm campaigns that play well with a section of the party’s core vote, but would appear to have less resonance beyond this.

Interesting additional party splits emerge in the ranking of the various projects. Labour voters look rather more kindly on coal than their counterparts – only 66% of them regard new coal power stations as doing great or a fair amount of damage, as against 70% of Tories and 81% of Lib Dems. By contrast, while both Lib Dem and Labour voters lean firmly against nuclear – with respective majorities of 57% and 56% suggesting new power stations would do substantial damage – the Conservatives are evenly split on the nuclear question, with 46% taking the same dim view and another 46% believing more nuclear stations would do little or no damage.

• Between 9 and 10 September 2012, YouGov questioned 1871 GB adults. The survey was carried out online. The figures have been weighted and are representative of all GB adults (aged 18+). 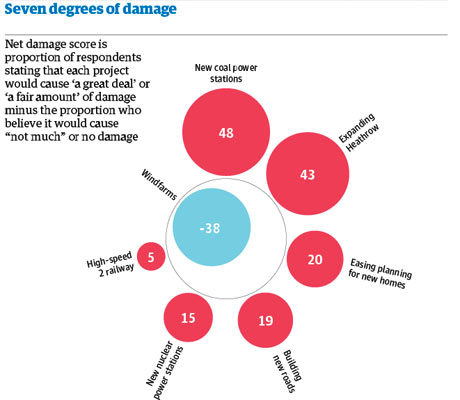