So much for rising airport employment – airports plan for more automation

Airlines are laying the groundwork for the next big step in the increasingly automated airport experience: a trip from the curb to the plane without interacting with a single airline employee – so much less employment at airports. As well as automatic check in, and electronic boarding passes, airlines are now turning to technology that enables travelers to check their own bags and scan those boarding passes, with no staff.  At the airport of the near future, “your first interaction could be with a flight attendant,”  Airlines hope this will quicken the airport experience for seasoned travelers—shaving a minute or two from the checked-baggage process alone—while freeing airline employees to focus on fliers with questions. IATA  is pushing for extending a complete self-service airport experience to 80% of the world’s fliers by 2020 in order to save the industry $2.1 billion a year.

Forget Kiosks, Now Airlines Want Fliers to Tag Luggage, Board on Their Own

By JACK NICAS And DANIEL MICHAELS

Airlines are laying the groundwork for the next big step in the increasingly automated airport experience: a trip from the curb to the plane without interacting with a single airline employee.

For years, travelers have been checking in online or at airport kiosks, and more recently, airlines have converted paper boarding passes into electronic ones. Now carriers are turning to technology that enables travelers to check their own bags and scan those boarding passes—but not always without snags. 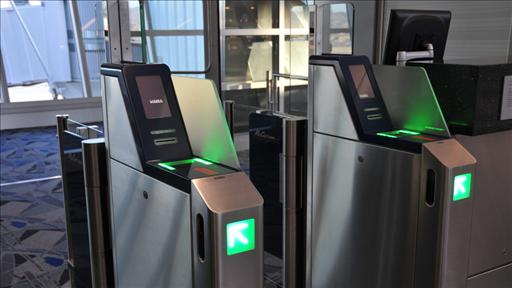 Airlines are laying the groundwork for the next big step in the airport experience: a trip from the curb to the plane without interacting with a single airline employee. Jack Nicas on The News Hub. Photo: Jack Nicas/The Wall Street Journal.

At the airport of the near future, “your first interaction could be with a flight attendant,” said Ben Minicucci, chief operating officer of Alaska Airlines, a unit of Alaska Air Group Inc. ALK 0.00% The carrier has been at the forefront of self-service in the U.S., recently introducing self-tagging of baggage in Seattle and San Diego with eight more airports planned this year.

After testing the technology in Austin, Texas, AMR Corp.’s AAMRQ +3.98% American Airlines is rolling out kiosks that direct travelers to tag their own checked bags in New York, Los Angeles, Chicago and other major airports over the next two years. And last month in Las Vegas, JetBlue AirwaysCorp. JBLU -0.81% became the first U.S. airline to officially implement self-boarding gates, where fliers scan their own tickets to board the plane.

Airlines say the advanced technology will quicken the airport experience for seasoned travelers—shaving a minute or two from the checked-baggage process alone—while freeing airline employees to focus on fliers with questions. “It’s more about throughput with the resources you have than getting rid of humans,” said Andrew O’Connor, director of airport solutions at Geneva-based airline IT provider SITA. 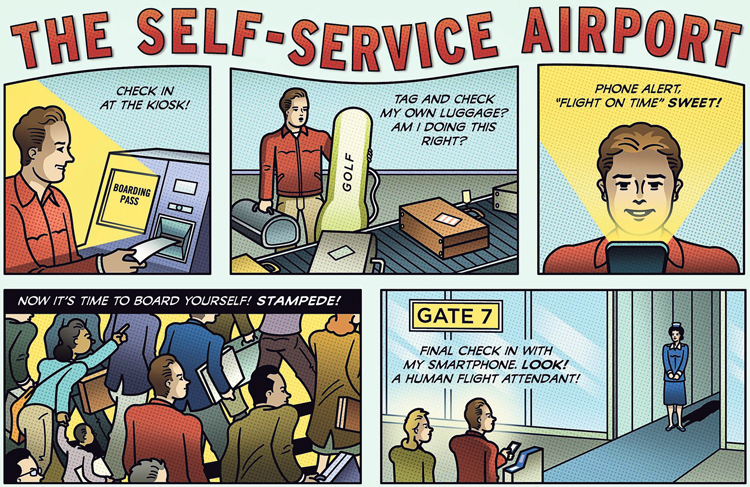 Airline-employee unions, however, say the machines are a way for carriers to cut staff by outsourcing preboarding tasks to fliers. “Clearly it’s not something passengers are clamoring for,” said Frank Larkin, spokesman for the International Association of Machinists and Aerospace Workers. “More technology, fewer people? I don’t think so.”

A recent SITA survey found self-boarding appeals to 70% of passengers and almost as many travelers want to tag their own bags. Self-tagging and self-boarding have each been implemented in 115 instances around the world, according to the International Air Transport Association.

That global airline trade group is pushing for extending a complete self-service airport experience to 80% of the world’s fliers by 2020 in order to save the industry $2.1 billion a year. Neither the IATA nor SITA offer estimates on the cost of implementation—something individual airlines also don’t disclose.

The Transportation Security Administration said it has monitored pilot programs for self-tagging and self-boarding and approves of the technologies.

U.S. airlines and airports are catching up to their counterparts in Europe, whereDeutsche Lufthansa AG LHA.XE -1.29% began testing self-boarding in the late 1990s. The airline officially implemented the technology last year in its three main hubs in Germany, where customers have readily adapted to it.

“A lot of our passengers are frequent fliers who really prefer not to talk with staff all the time,” said Lufthansa spokesman Aage Duenhaupt. “They check-in online, get a mobile boarding pass and then use it at an automated boarding gate.”

British Airways and Iberia, both units of International Consolidated Airlines Group SA, are also introducing a variety of self-service tools, including at Madrid’s Barajas Airport, where Iberia has 30 kiosks that print checked-bag tags. New ID readers have sped the process to less than an average of 30 seconds, the airline said.

Before long, travelers in many countries will be able to print baggage tags at home and insert the bar-coded paper in plastic cases distributed by airlines, similar to baggage tags that many already issue to their frequent fliers, SITA said. Qantas Airways Ltd.QAN.AU -2.56% of Australia already issues permanent electronic bag tags that store fliers’ information.

At the front lines of the self-service push in the U.S. is Las Vegas’s McCarran International Airport, long known for its 1,600 slot machines. A new terminal here features 150 kiosks and 14 gates equipped with self-tagging or self-boarding technology for the carriers operating there, including five U.S. airlines.

On a recent weekday , fliers of Canadian carrier WestJet Airlines Ltd. WJA.T +0.83%largely breezed through the check-in process with the help of kiosks that printed their bag tags. But the process was hardly fully automatic: While a handful of travelers handled the process themselves, WestJet employees tapped through the kiosk screens for most fliers and then applied their bag tags. More agents then scanned the tags and boarding passes before sending the luggage to the plane.

Past the security checkpoint, fliers waiting to board a JetBlue flight were generally positive about self-boarding after a gate agent explained the process to them over the public-address system.

“Isn’t that wonderful?” said Carl Milkie of San Marino, Calif. “It’ll probably save time if everything goes properly.” Minutes later, Mr. Milkie strolled through one of the two self-boarding gates—plastic doors that swing open when a correct boarding pass is scanned—but his wife, Leila, wasn’t so lucky.

The line came to a standstill after the system wouldn’t recognize her ticket’s bar code and the gates refused to open. A gate agent eventually had to escort Mrs. Milkie around the gates, and the machine continued to halt others, prompting agents to abandon the system and manually board the plane.

“We overloaded the system,” said JetBlue agent David Wicburg, adding that he normally prefers automated gates because they tend to ease congestion.