Can the UK fly more without breaking climate change targets?

The aviation industry is bullish about its prospects of decoupling growth in aviation from the growth in emissions. At least Boeing and BAA are, and a host of airlines and airports that are part of the “Sustainable Aviation Council”. The SAC’s 2012 roadmap argues that virtually all of the extra GHG that would be emitted by this rise can be cut by a combination of sleeker aircraft, leaner engines, smoother ground operations, more direct flight paths and up to 40% use of biofuels in global aviation. It also suggests that the use of carbon trading would mean aviation’s current carbon footprint could be halved even if passenger numbers more than doubled. But aircraft emissions cannot be airbrushed away through carbon trading, as Tim Yeo and others suggest.  Given a new dash for gas in the UK, new road building and then more aviation, where are the CO2 cuts needed for permits to trade actually going to come from? Damian Carrington explores the issues.


Can the UK fly more without breaking climate change targets? 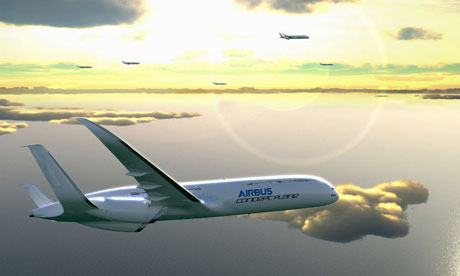 Airbus says free-glide aircraft approaches and landings could be part of the measures that allow an unrestrained increase in flying with no great increase in carbon emissions. Photograph: Airbus S.A.S 2012

Planes launched into the skies by catapults running on green energy, then cruising efficiently in self-organised flocks across oceans and continents. That is the kind of blue-skies thinking, outlined by Airbus on Thursday, that the aviation industry argues will allow an unrestrained increase in flying with no great increase in carbon emissions.

The realisation of these and other measures, such as biofuels and more efficient jet engines, is key in determining whether the UK could build new runways in the south-east and at Heathrow – a question in the spotlight after a cabinet reshuffle this week that seems to make it clear the government would like to – while keeping its commitment to tackling global warming. The other question is how much of the nation’s future emissions, which will need to be cut severely to meet legally binding climate targets, are allotted to flying.

The aviation industry is bullish. “We think we can definitely decouple growth in aviation – and all the benefits that brings – from the growth in emissions, and the benefits of that,” said Matt Gorman, the director of sustainability at Heathrow owner BAA and chair of the Sustainable Aviation Council (SAC), which represents over 90% of UK airlines and airports.

On past trends, the number of air passenger is set to rise by 250% by 2050, according to the Department of Transport. The SAC’s 2012 roadmap argues that virtually all of the extra greenhouse gases that would be emitted by this rise can be cut by a combination of sleeker aircraft, leaner engines, smoother ground operations, more direct flight paths and up to 40% use of biofuels in global aviation. The roadmap goes even further, suggesting that the use of carbon trading would mean aviation’s current carbon footprint could be halved even if passenger numbers more than doubled.

But environmental campaigners are scornful of the industry’s vision. “The roadmap is wishful thinking in the extreme,” said Jean Leston, a transport expert at WWF-UK. “We are being sold a lot of promises that are not being met. The measures may cut emissions by a few per cent, but the demand for flying is going up far faster. They should not be allowed to expand until it has demonstrated these efficiencies can be achieved.”

Greens note that aviation is the fastest growing source of carbon emissions in the UK and that Britons have had the highest flying footprint of any nation. They also point to scientific evidence that the impact of carbon pollution emitted at high altitude is far higher than that at ground level, meaning the 5% of national emissions caused by aviation result in more than 10% of the country’s contribution to global warming.  [Figures from government are 6.3% and almost 13%].

However, a new way of dealing with aviation’s emissions has emerged since January with the inclusion of the sector in the European Union’s emissions trading scheme (ETS), which caps the continent’s output of climate-warming gases. According to supporters of new runways, this means any increase in pollution from extra planes and runways will be offset by cuts in other industries.

But environmentalists say aircraft emissions cannot be airbrushed away through carbon trading. “You are asking for future emissions for short-haul flights to take priority over heating peoples’ homes – that is not a strong argument,” said Joss Garman, former co-founder of campaign group Plane Stupid and now at Greenpeace. “Given a new dash for gas in the UK, new road building and then more aviation, at some point you have to ask where are the cuts needed actually going to come from?” Garman also warned that building new runways creates a lock-in effect, meaning high emissions for decades to come. “Once it is built, you will want to use it.”

Rob Elsworth, policy officer at carbon trading thinktank Sandbag, said: “There is an element of truth in the argument that under emissions trading aviation will have to pay for its pollution. But the major problem is that the ETS is not functioning well, as there are a billion tonnes of spare permits, and making the ETS effective is an extremely long-term process, dogged by political lack of will and the complexities of Europe’s current economic situation.”

Even BAA’s Gorman acknowledges difficulties in the ETS: “It is still very early days for aviation in the ETS and it is inevitable that there will be some learning and improvements. But that does not undermine the basis of the policy.”

The most authoritative and independent analysis of whether more flying is possible without breaking the UK’s climate change commitments comes from the government’s official advisers, the Committee on Climate Change (CCC). The CCC creates carbon budgets – the amount of carbon the country can emit in a five year period and keep to its climate targets – based on the lowest cost methods.

It concluded that passenger numbers could increase by 60% by 2050 – a rise that would require new runways, though the CCC has no opinion on where they are sited – while still cutting total national emissions by 80%. That increase is far lower than the government forecasts of a 250% rise in passenger numbers, but higher than some environmentalists argue is possible. [CCC – see below ].

A report by WWF-UK and the Aviation Environment Federation, claims that such a 60% rise could be achieved without any new runways being built at all. “Twenty per cent of flights out of Heathrow could easily be replaced by train travel,” said Leston. “But airlines do not want that, as they would lose that source of income.”

The CCC’s target would mean almost a quarter of the nation’s emissions in 2050 would come from aviation. David Kennedy, CCC chief executive, said: “We can fully decarbonise electricity, heating and ground transport through electrification, but we can’t fully decarbonise aviation. So should we not use [a significant portion of our carbon budget] for something we value highly like flying?”

The CCC describes the industry’s 25-40% target for biofuels as “speculative”, stating that 10% is far more likely. “If you take all the waste in the world you can turn into biofuel and all the land that might be available and then use that fuel in the most economic way, there is not a lot left over for aviation,” said Kennedy. British Airways’s plan to turn half a million tonnes of Londoner’s household rubbish into 50,000 tonnes a year of jet fuel from 2015 will provide 2% of the fuel it uses.

The argument over aviation and climate change in 2007 became focused on the “totemic” issue of the planned third runway at Heathrow, according to Kennedy. “That runway became associated with the idea that you cannot fly in a carbon-constrained world, but the answer is you can fly and fly a bit more than now. But what you can’t have is unfettered growth.”

The UK’s aviation industry rejects this, by arguing that a 250% rise in passengers can be achieved in a low-carbon way. “Growth in aviation and tackling climate change are compatible,” said Gorman.

On the other side, Greenpeace’s Garman said: “It is ultimately about what type of economic growth you want to have. Do you want to build a low-carbon transport system or new aviation capacity that is inherently unsustainable?”

•    Committee on Climate Change.  Letter from Adair Turner to Ed Miliband and Andrew Adonis, entitled:  CCC advice on a framework for reducing global aviation emissions.  9.9.2009  (the CCC report on aviation is due on 8.12.2009)

•  Committee on Climate Change, report on “Building a low-carbon economy – the UK’s contribution to tackling climate change” published on 1.12.2008.   The section on aviation is  (31 pages)  is   “Chapter 8: International Aviation and Shipping”

•  Committee on Climate Change, 4th Carbon Budget report. Published 7th December 2010.   The Carbon Budget says international aviation and shipping should be included, and it is vital that UK aviation emissions in 2050 are no higher than in 2005.  Also that, as technologies to cut aviation emissions are not readily available, other sectors of the economy will need to cut by 85% in 2050 in order to let aviation grow by 60%.   The Fourth Carbon Budget       Also press release and key points

The CCC report concluded that passenger growth of 60% by 2050
could be compatible with emissions returning to 2005 levels, under
certain assumptions about fuel efficiency, the use of sustainable fuels
and behavioural change.