Why is the allegedly responsible, green, Co-op sponsoring the anti-APD campaign?

The Co-op’s travel company, Co-operative Travel, which  last year merged with Thomas Cook, is backing the campaign against Air Passenger Duty. The Co-op prides itself on being ethical, and states that “Our pioneering involvement in Fairtrade and combating climate change reflects the values of our members and their desire to build a better future for themselves, their families, their communities and the wider world.”  But not, apparently, when it comes to its Travel company.  On learning of the Co-op’s support for the anti-APD campaign, Cait Hewitt from the Aviation Environment Federation said: “It’s extraordinary that it seems the Co-op is using their customers’ money to support industry lobbying to cut aviation taxes”. John Stewart commented: “The involvement of Co-operative Travel with this campaign badly tarnishes its claim to be green and ethical. Many of its members will be shocked at its decision to join this alliance.” They Co-op could do with some complaints about this double standard.


In order to complain to the Co-op, go to  Complaints  or see below

Why is the Co-op sponsoring an anti-aviation tax campaign? 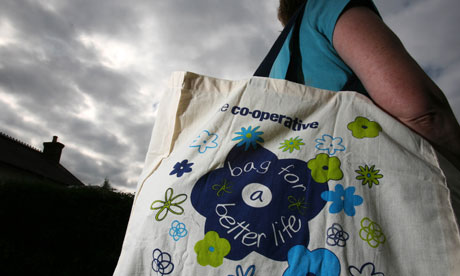 “We are among the world’s leading businesses tackling climate change,”says the Co-operative Group. [ Co-op’s page on climate change ].  No wonder there was outrage among environmentalists recently that a member of the group, Co-operative Travel, is sponsoring an anti-aviation tax campaign.

A Fair Tax on Flying is a campaign being run by the Airport Operators Association (AOA). Cait Hewitt from the Aviation Environment Federation says:

“It’s extraordinary that it seems the Co-op is using their customers’ money to support industry lobbying to cut aviation taxes”.

The campaign has adopted the American political lobbying tactic of having a title mimicking those run by environmental groups – there is already Fair Tax on Flying, run by campaigners who would like to see aviation pay more tax.

Motorists pay 20% VAT on fuel, cars and repairs, but aviation pays zero VAT on aviation fuel, planes and servicing. Even airport alcohol and tobacco sales are VAT-free. Air passenger duty (APD) currently raises about £2.5bn per annum, whereas the motor industry is estimated to pay about £50bn in taxation every year. However, Darren Caplan, chief executive of the AOA says:

“It is wrong to compare aviation with forms of private transport, such as car travel; it is a form of public transport.”

The Aviation Environment Federation estimates that if aviation had to pay VAT like the motor industry, it would owe the taxman about £11bn. As even budget flights are dominated by the rich, this tax subsidy takes from the poor in lost services and higher taxes and gives to the rich tax breaks for their holidays abroad.

APD on all economy European flights is a modest £13 a flight, a small increase of about £5 in real terms since 1994, when awareness of global warming was largely nonexistent. APD on long haul flights to places like New Zealand is considerably more expensive, reflecting the enormous carbon footprint involved.

(A small note of explanation on APD: while it was explicitly a green tax at the outset, the Treasury no longer count it as an environmental tax; the Office of National Statistics say it still is).

The recent inclusion of aviation in the European emissions trading scheme (ETS) will gradually increase European flight tickets by between £1.50 and £7 by the end of the decade depending on their carbon emissions, according to a recent report by the House of Commons library.

So why, in complete contradiction to all their loudly declared ethical standards, is the Co-operative group sponsoring a campaign to lower APD on such climate change-exacerbating flights?

Craig Brownsell, spokesman for the Co-operative group, told me:

“Historically, we have always argued for a system which is fair on consumers and fair on the climate – at present the tax is not put back into projects which reduce greenhouse gas emissions.”

John Stewart, a trustee of Campaign for Better Transport, and chair of HACAN Clearskies, sums it up when he says:

“The involvement of Co-operative Travel with this campaign badly tarnishes its claim to be green and ethical. Many of its members will be shocked at its decision to join this alliance.”

This is the Co-op’s page on Protecting the Environment  (no mention of travel, as they make a lot of money from their travel business).

A statement in their 2011 Annual Report and Accounts states:

“Our pioneering involvement in Fairtrade and combating climate change reflects the values
of our members and their desire to build a better future for themselves, their families, their communities and the wider world.”

“Our approach continues to earn us an impressive reputation and during 2011
we achieved a raft of awards, including winner of the Observer’s Ethical Business
Award; first place in Business in the Community’s Climate Change Award and
‘Platinum Plus’ in their Corporate Responsibility Index; a leading ranking in the
Sunday Times’ Best Green Companies List; and winner of The Financial Times’
award for Europe’s Most Sustainable Bank.”  http://www.co-operative.coop/Corporate/PDFs/Annual_Report_2011.pdf

So much PR and hypocrisy.

Complaining to the Co-op:

A complaint need not be long, or complicated. Merely ask how the Co-op justifies trying to reduce the tax on flying, which is already very under-taxed, and square this with claims to be ethical and environmentally sustainable.  Personal flights are often the largest single component of an individual’s carbon footprint.

There is much more information on APD at Air Passenger Duty

This is the Co-op’s travel company   http://www.cooptravel.co.uk/

Their page on cheap holidays http://www.cooptravel.co.uk/Cheap/

Their page on cheap flights http://www.cooptravel.co.uk/flights/ 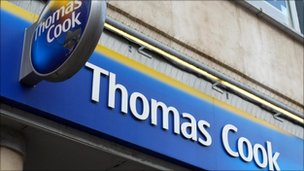 Plans by Peterborough-based travel firm Thomas Cook and the Co-Operative Group to merge their High Street travel agent businesses have been given the final go-ahead by the Competition Commission.

The commission has ruled that even with the firm’s strong position customers were unlikely to pay more or have less choice as a result of the merger.

Thomas Cook said the merger would save the company £35m a year.

The company will own 70% of the new group.

Thomas Cook will be merging with both Co-Op Travel – which has its headquarters in Burslem, near Stoke – and the Midlands Co-Op, based in Lichfield, Staffordshire.

The merger, provisionally backed in July, is expected to be completed by the end of September and could lead to store closures and job losses.

Problems in the UK have been one of the reasons behind Thomas Cook’s disastrous last 12 months, a year that has seen its share price slump by 70%.

A strategic review of its UK business is underway as it looks at the mix of holidays it offers and the utilisation of its airline fleet.

The “A Fair Tax on Flying” campaign members  include: