BA is cutting 400 senior cabin crew positions on its long and short-haul routes, as it says it has too many of them. It has a total of around 14,000 cab in staff. The redundancies would be voluntary and that it has started a 90-day consultation process. The first cuts are expected to take effect from next March, and are expected to be from Heathrow.  As well as the BA cuts, Iberia is cutting 4,500 jobs. Among other European carriers, Air France-KLM Group plans to cut 1,300 positions at its Dutch unit in addition to 5,000 already being cut at the larger French business. Germany’s  Lufthansa is cutting 3,500 administrative posts and as many as 1,000 catering jobs. Those all add up to 15,300 jobs across the countries. As well as some 350 from closure of BMI.

The announcement seems light in comparison to IAG’s plans to cut thousands of jobs at Iberia and the involuntary cuts being doled out at Air France and Lufthansa.

Applicants are being sought among pursers working in the carrier’s global fleet, known as Worldwide, which operates long- haul services. They’re also being targeted among pursers and cabin service directors — the highest-ranked flight attendant position — in the Eurofleet, which provides short-haul flights.

“Based on the feedback from our senior cabin crew in the past few months, we believe that there will be good demand for this opportunity,” British Airways said today in e-mail, without specifying how many posts it aims to eliminate.

Willie Walsh, chief executive officer at parent company International Consolidated Airlines Group SA, is seeking to cut senior cabin crew two years after riding out a strike to push through lower pay for new recruits. BA said it has begun a 90- day consultation with the Unite union on the measures, which the Sun newspaper reported earlier could result in 400 jobs losses.

Walsh is seeking deeper cuts at BA’s unprofitable sister carrier Iberia, where it aims to scrap 4,500 posts, or more than one-fifth of the total. Spanish crews are planning a six-day strike before Christmas as part of a protest against the losses.

Among other European carriers, Air France-KLM Group, the regional No. 1, plans to eliminate 1,300 positions at its Dutch unit in addition to 5,000 already being cut at the larger French business. Germany’s Deutsche Lufthansa AG is scrapping 3,500 administrative posts and as many as 1,000 catering jobs. 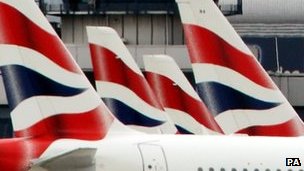 BA said that none of the losses would be compulsory

British Airways is cutting 400 senior cabin crew positions on both its long and short-haul routes.

It said that all the redundancies would be voluntary and that it had started a 90-day consultation process. The first cuts are expected to take effect from next March.

The announcement comes after a newspaper report said the airline had too many senior cabin crew members.

BA’s sister airline, Iberia, is moving ahead with plans to shed 4,500 jobs.

The two carriers merged in 2011 to form International Airlines Group.

BA said the job cuts would affect senior cabin crew staff who worked exclusively on either its long or short-haul flights, and not those who worked across both.

The airline has about 14,000 cabin crew staff in total.

In 2010 and 2011 it was hit by a series of strikes over staffing levels, pay, and the removal of travel concessions.

Walsh confirms the closure of Bmibaby in September with job losses

IAG will press ahead with plans to close no-frills Bmibaby on 9th September. When IAG bought Bmi recently they said they would sell  Bmibaby after a 3-month consultation process with Bmibaby staff. This has now finished, and the decision is to sell.  Around 350 jobs will be lost at Bmibaby.  IAG had already cut various Bmibaby routes from June, and now the remaining flights from Birmingham and East Midlands end in September. No buyer could be found for Bmibaby, though Bmi Regional was sold at the end of May.  BA is taking on around 1,500 of Bmi’s 2,700 staff – mostly pilots and cabin crew. The decision on which airlines’ will get the 12 Heathrow slots being given up by BA will probably be made in December.