Britain’s biggest travel company paid no UK corporation tax in its last financial year despite posting record annual profits on Tuesday.  Tui said it had been a year of “many successes”, with an 8% leap in underlying pre-tax profits to £390m. But its UK corporation tax bill was zero as a result of losses incurred following a restructuring launched 5 years ago. It said it would start paying tax again once those losses have been carried forward and that it was paying the “right amount of corporation tax” in the countries in which it operates. Tui said it was “fully compliant with UK tax law”, and it expected to pay small amounts of UK corporation tax in 2013/14 with significantly larger amounts in later years as brought-forward losses were eliminated.  It is galling that a company can both crow about financial successes, and yet avoid making the sort of tax payments that would therefore be expected. EasyJet also pays very little corporation tax.  So much for the alleged huge financial contribution that aviation makes to the UK.  The tax affairs of Google, Amazon and Starbucks have made many in the UK very angry indeed. 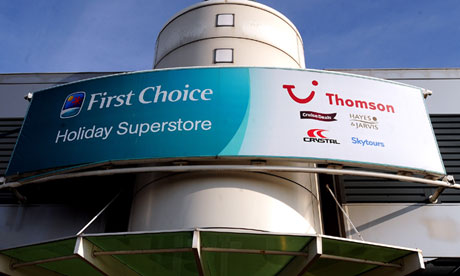 Thomson and First Choice operator Tui Travel said it had been a year of “many successes”, with an 8% leap in underlying pre-tax profits to £390m.

But its UK corporation tax bill was zero as a result of losses incurred following a restructuring launched five years ago. It said it would start paying tax again once those losses have been carried forward and that it was paying the “right amount of corporation tax” in the countries in which it operates.

Details of its tax payments come amid an escalating row after it wasrecently revealed that Google, Amazon and Starbucks have been using legal schemes to avoid paying their fair share of tax in the UK.

Tui said it was “fully compliant with UK tax law”, adding that it expected to pay small amounts of UK corporation tax in 2013/14 with significantly larger amounts in later years as brought-forward losses were eliminated.

In Tuesday’s results, the company said the package holiday was enjoying a “renaissance” as customers opted for the certainty of all-inclusive deals rather than DIY trips. It also reported strong demand for holidays in 2013 as households look to avoid a repeat of this year’s wash-out UK summer.

However, like-for-like prices of holidays could rise by up to 2% next year as Tui faces up to cost pressures – such as higher fuel – of up to 10% in 2013.

Tui added it was benefiting from difficulties at its rival Thomas Cook, which last week revealed plans to slash a further £100m in costs after suffering pre-tax losses of £485m.

Chief executive Peter Long said the year had been one of “many successes”.

“We have delivered record group profits, while the UK achieved outstanding results both in terms of profit and margin all against a backdrop of continued economic uncertainty,” he added.

UK holidaymakers looking to escape to the sun after this year’s dismal summer also resulted in a surge in bookings for next summer, up 12%.

Tui said its unique holidays – including Couples, Sensatori and SplashWorld – were already up 18% for summer 2013, accounting for 83% of bookings. Strong sales of these exclusive package deals offset a fall in UK and Ireland customer numbers in the year to 30 September, down 5% to 5.2 m.

It said average UK selling prices were up 4% this winter and 3% for next summer, while it also made £4m in savings over the year. For winter 2012, Tui said UK bookings were up 1%.

But it has slashed its capacity by 34% in France this winter and said bookings were down 28% amid “extremely challenging” trading in the country.

Shares rose 2% as Long said the group was aiming for earnings growth of between 7% and 10% over the next five years.

Analyst James Hollins at Investec Securities said Tui was trading well despite the threat of online rivals and low-cost carriers.

The group said Thomson was the second most visited travel website in the UK.

Tax experts have downplayed Tui Travel’s admission that it paid no corporation tax this financial year.

The tour operator posted a profit before tax of £390 million but said it had “no profits chargeable to UK corporation tax”.

It said this had been “eliminated due to capital allowances, losses brought forward from prior years as a result of restructuring and costs incurred by the ash cloud in 2010”.

Peter Long, Tui’s chief executive, said: “It’s very transparent, we’ve undertaken major restructuring during the past five years as we’ve brought two businesses together – and as a consequence we’ve got carry forward of unutilised tax losses, which are offset against our profits on a perfectly normal basis.”

Corporation tax has been a hot topic in recent weeks, with Amazon, Google and Starbucks grilled by MPs. However, Tui’s stance has been backed up by tax experts.

Jonathan Wall, managing director of Elman Wall, said: “I’d fully expect Tui to be paying the correct amount of tax. It’s complicated and cannot easily be deduced from either a company’s turnover or its profit.

Heather Self, tax director at Pinsent Masons, said: “Nothing in this [Tui’s results] sounds like avoidance. If you make a loss in one year you can use it against your profits in the next year,” she added.

EasyJet and their tax

http://2009annualreport.easyjet.com/files/pdf/NotesAccounts.pdf
Their accounts for 2011 are at
http://corporate.easyjet.com/media/latest-news/news-year-2011/15-11-2011b-en.aspx?sc_lang=en
and
http://corporate.easyjet.com/~/media/Files/E/Easyjet-Plc-V2/pdf/media/latest-news/2011/15-November-easyJet-plc.pdf
it appears as if easyJet made, in 2011, profit for the year of £225 million, and £121 million in 2010.
And they paid no corporation tax in 2010 and £5 million in 2011.
This may all be “legal” but it is short changing the UK of tax income that the country could do with.
The ways companies minimise their tax payments to the UK government are by:
(1) incorporate yourself overseas in some convenient tax haven then charge all the other bits of the company for services or intellectual property That way you shift all of the profit overseas
(2) claim against some past loss or future expected loss so that you don’t actually make a profit this year
Both of these are probably being used by easyjet, plus some other more convoluted equivalents