Japan’s two main airlines have grounded their 24 Dreamliners after one was forced to make an emergency landing because of battery problems. Yesterday an ANA plane was forced to land shortly after take-off when smoke was detected in one of the electrical compartments, where lithium batteries are used for auxiliary power. The source of the fire is not yet known, but is likely to be the batteries, which are well known for their tendency to thermal runaway.  In recent weeks, Dreamliners have suffered issues including fuel leaks, a cracked cockpit window, brake problems and an electrical fire.he source of the smoke is not yet known.   Last week, the US FAA started a joint review with Boeing of the design, manufacturing and assembly of the Dreamliner.  There are a total of 49 Dreamliners in use worldwide – which are meant to be slightly more fuel efficient. The 787 is not the only aircraft to use Lithium Ion battery packs. The Airbus A380 uses a smaller number. And the upcoming Airbus A350 will use a much larger number. 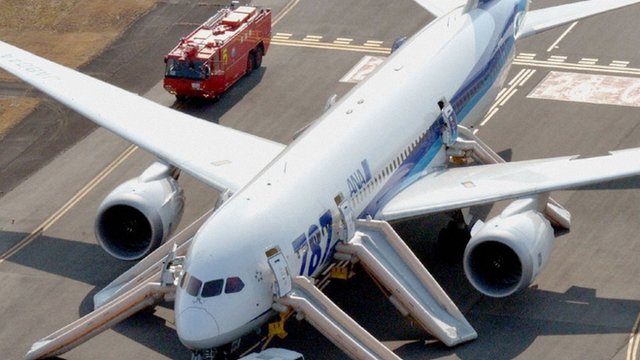 The ANA flight made an emergency landing at Takamatsu

Japan’s two main airlines have grounded their Boeing 787 Dreamliners after one was forced to make an emergency landing because of battery problems.

All Nippon Airways (ANA) grounded its fleet of 17 Dreamliners when its flight NH 692 from Yamaguchi Ube was forced to land shortly after take-off.

Japan Airlines followed suit, saying it would ground its fleet of seven 787s from 16 January until further notice.

This is the latest setback for Boeing and its problem-hit Dreamliner planes.

In recent weeks, Dreamliners have suffered issues including fuel leaks, a cracked cockpit window, brake problems and an electrical fire.

“You’re nearing the tipping point where they need to regard this as a serious crisis,” said Richard Aboulafia, a senior analyst with the Teal Group in Fairfax, Virginia.

“This is going to change people’s perception of the aircraft if they don’t act quickly.”

Earlier reports that smoke was seen in the cockpit were inaccurate, ANA said. The pilots saw a warning on their computer screen telling them there was smoke inside one of the electrical compartments, the airline said. The source of the smoke is not yet known.

The pilots also received a warning that there was a fault in the battery system. ANA said the battery in the forward cargo hold was the same type as the one involved in a fire on another Dreamliner at a US airport last week.

The ANA flight landed at Takamatsu airport at 08:47 on Wednesday after the pilot saw an error message in the cockpit.

ANA said that the 129 passengers and eight crew were evacuated, with a number of people sustaining minor injuries.

The Reuters news agency reported that five people were injured, while Bloomberg said that one person was sent to hospital. ANA officials were not immediately available to confirm the figures.

The BBC’s correspondent in Tokyo, Rupert Wingfield-Hayes, said that local television footage showed emergency chutes were deployed from the plane. There were also fire trucks on the runway.

Paul Lewis, a spokesman for Boeing, told the BBC that the planemaker was “aware of the diversion of a 787 operated by ANA to Takamatsu in western Japan”.

He added that Boeing “will be working with our customer and the appropriate regulatory agencies”.

The concerns have spread beyond Japan, however, not least because the Dreamliner was seen as Boeing’s flagship new aeroplane and had attracted orders from many of the world’s biggest and best-known airlines.

The 787 is said to be one of the most fuel-efficient in the industry, and Boeing delivered 46 Dreamliners to customers in 2012.

The regulator said it was in contact with Boeing but as yet had no plans to ground the five Dreamliners that are currently being used by Air India.

Australia’s Qantas Airways said its order for 15 Dreamliners remained on track. Its subsidiary Jetstar is due to take delivery of the first of its aircraft in the second half of this year.

United Airlines is the only US carrier currently flying Dreamliners, and the carrier said it was not taking any immediate action.

Even before Wednesday’s emergency landing, Boeing was facing an inquiry by Japanese and US authorities over its Dreamliner issues.

Last week, the US Federal Aviation Administration started a joint review with Boeing of the design, manufacturing and assembly of the Dreamliner.

On Tuesday, Japanese authorities said they would conduct an inquiry after two successive fuel leaks on a different 787 operated by Japan Airlines. 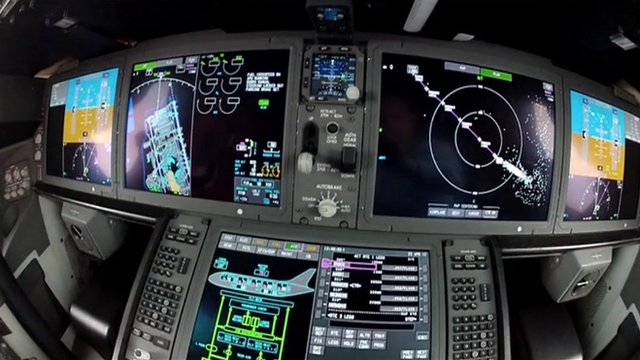 Inside the cockpit of the Dreamliner

On 8 January, Japan Airlines reported that a fire broke out on a 787 shortly after it landed in Boston. There have also been reports of brake issues.

“It is not abnormal for new aircraft to have some teething problems,” said Chris de Lavigne of Frost and Sullivan in Singapore.

“There were initial issues with the Airbus A380 as well. Look where it is today; it is flying successfully and everyone seems to be happy with it.”

However, he added that a lot would depend on the outcome of the two investigations.

“If it turns out to be a major issue and requires re-engineering to be done, then you may need to ground some of the planes or even the entire fleet.”

There have been six separate safety incidents with Japanese owned 787s in the last week and a half. But they are not all equal.

The incident today was by far the most serious. Smoke inside an aircraft while in-flight is always a serious matter. That’s why the plane was so quickly diverted, and probably why ANA and JAL have now ordered their fleets to be grounded.

It also looks like this incident may not be isolated. It appears very similar to an electrical fire on board a Japan Airlines 787 in the United States last week.

The source of that fire was the 787’s lithium Ion battery pack. All the way back in 2007, the US Federal Aviation Administration expressed concern about the installation of Lithium Ion batteries on board the 787 because of their known problem with so called “thermal runaway”. It’s a problem that has caused mobile phones and laptop computers to catch fire in the past.

The 787 is not the only aircraft to use Lithium Ion battery packs. The Airbus A380 uses a smaller number. And the upcoming Airbus A350 will use a much larger number.