An Augusta 109 Helicopter has clipped a crane on top of the very tall blocks of flats, The Tower, One St George Wharf, very close to Vauxhall at 8am during the rush hour.  It then crashed to the ground, killing the pilot and one person on the ground.  Others on the ground were injured and cars set on fire.  Several passers-by escaped though were fery close to the fire, and the parts of falling crane. Police said it was understood the helicopter was on a scheduled flight from Redhill in Surrey to Elstree in Hertfordshire. A spokesman for London Heliport at Battersea said the pilot had requested to divert and land there due to bad weather as there was dense fog.  Helicopters are required to be at 1,000 feet over London, and those with only one engine have to fly along prescribed routes. The top of the crane was of the order of 700 – 800 feet high. Questions have been asked in the past about the wisdom of flying so many helicopters over the centre of London, on safety grounds. This may now trigger public debate.
Tweet 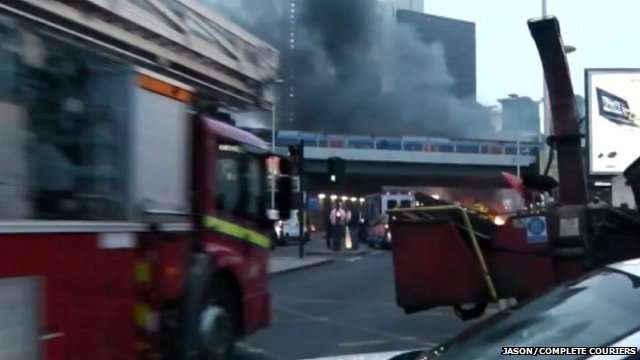 Two people have been killed and nine injured when a helicopter crashed into a crane in central London in misty conditions.

Police said it appeared the helicopter had hit the crane on top of The Tower, One St George Wharf at about 08:00 GMT.

About 90 firefighters are at the scene near Wandsworth Road in South Lambeth. Doctors said one of the dead was the pilot and the other was on the ground.

A man was rescued from a burning car by firefighters.

Burning wreckage lay in the road but the fire was brought under control within 25 minutes, the fire brigade said.

Six people were taken to hospital, one with a broken leg and the others with minor injuries. Seven people were treated at the scene.

Part of the crane was left hanging from the side of the building.

Police said it was understood the helicopter was on a scheduled flight from Redhill in Surrey to Elstree in Hertfordshire.

A spokesman for London Heliport at Battersea said the pilot had requested to divert and land there due to bad weather.

The incident caused gridlock with all approaches to the Vauxhall Cross one way system closed at the height of the rush hour and Vauxhall Tube station and railway station closed, though the stations have since reopened.

London Fire Brigade said more than 50 other firefighters were at St George’s Wharf to secure the damaged crane.

Met Police Commissioner Bernard Hogan-Howe said: “We believe there are 11 casualties, two fatalities and nine less seriously injured but one is critically ill. People are presenting themselves to different places.”

Vauxhall bus station is always busy. It’s a hub where people can connect with the Underground and rail services. Helicopters flying along the river are a common sight.

This morning the rush hour was confused as well as crowded. In the aftermath of the crash, bus and other traffic had been held back on the Wandsworth Road.

It wasn’t long before there were tailbacks. The journey wasn’t any easier on foot. Pedestrians were directed away from the main road and pavements running along the Nine Elms Sainsbury’s supermarket and on to side streets.

By the time I arrived at Vauxhall bus station the police were starting to tape off many of the approach roads as well. You could still smell the smoke and it was difficult to see the top of the tower and the damaged crane.

Commuters mingled with large groups of construction workers – the crowd took time to move despite the efforts of police community support officers and bus station staff.

Met Commander Neil Basu told BBC News it was “miraculous” the crash was not much worse.

The BBC weather centre said weather observations at the time of the crash showed very low cloud but not thick fog. The nearest observation site was London City Airport which at 08:00 reported 700m visibility with broken cloud at a height of 100ft.

He said the helicopter fell into Wandsworth Road hitting various vehicles and bursting into flames and there were also fires in nearby buildings.

NATS, which runs air traffic control across the UK, said the helicopter pilot had been receiving assistance earlier in the journey but not at the time of the crash.

The incident will be subject to an investigation by the Air Accidents Investigation Branch.

An RNLI lifeboat was initially sent to search the Thames near the crash scene following a request from London Heliport after it lost contact with the aircraft, which is understood to be an AgustaWestland AW109, a lightweight, twin-engine helicopter with eight seats.

The side of a building on one side of the street also caught fire.

Passers-by stood watching as the wreckage burned. A motorcycle was also lying on its side in the road where it was abandoned.

Mark Osbourne, from Metropolis Motorcycles, a bike shop near the scene, said he ran to try to help the injured.

“There was lots of wreckage and fire,” he said.

“I saw a woman on a motorcycle that must have missed the carnage by six feet.

“It felt like a war movie, it was surreal.”

Craig Dunne, who was walking to work at the time of the accident, said: “When I got to the end of the road there was a massive explosion and the crane is obviously in pieces.

“And I looked to the left-hand side and there were cars – three cars on fire – people screaming, shouting and hollering, and the next thing I know there are police, ambulances and everything everywhere and people going crazy. It’s madness – absolute madness.”

Mark Correll was cycling along Wandsworth Road when debris from the crash started falling around him.

“I heard a massive explosion and looked up to see debris falling everywhere from the sky,” he said.

“I didn’t hang around as there was massive debris falling intermittently and if anything had hit me I would have been killed.

“My first instinct was to dodge the debris – I thought the building was going to collapse.

“It was easily the most frightening thing I have ever witnessed.” 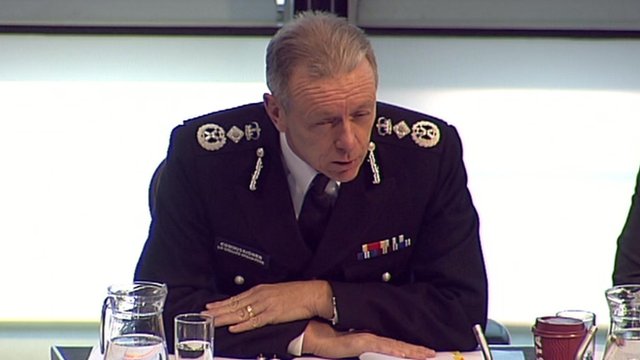 He said the building the helicopter hit was “shrouded in mist”.

Market worker Andrew Ross said: “I heard a loud bang and I saw this helicopter falling out of the sky.

“(There was) an orange glow and lots of smoke coming up.

“It was flying below cloud cover – it was still foggy and a little bit dark.”

Michael Gavin, who was waiting for a train on a platform at Vauxhall station, said: “I heard the bang – the top of the crane was obscured by the fog so I did not see the impact but I did see the helicopter falling to the ground along with pieces of the crane, then the long plume of smoke from there.

“It was really quite shocking. There was a group of us on the platform waiting, we could not see where it hit because it was blocked by a wall at the end of the station.

“There were a lot of worried people around.”

Nicky Morgan, MP for Loughborough, heard an “enormous bang” as she walked towards Vauxhall Tube before seeing “clouds of black smoke”.

Quinn Murray, who was cycling when he saw the crash, said: “I saw the helicopter hit the top of the crane and come down just to the left of the station.

“There was quite a large amount of fire and a huge smoke cloud. It wasn’t on the road, but into a building site where they are building the new Nine Elms area.” 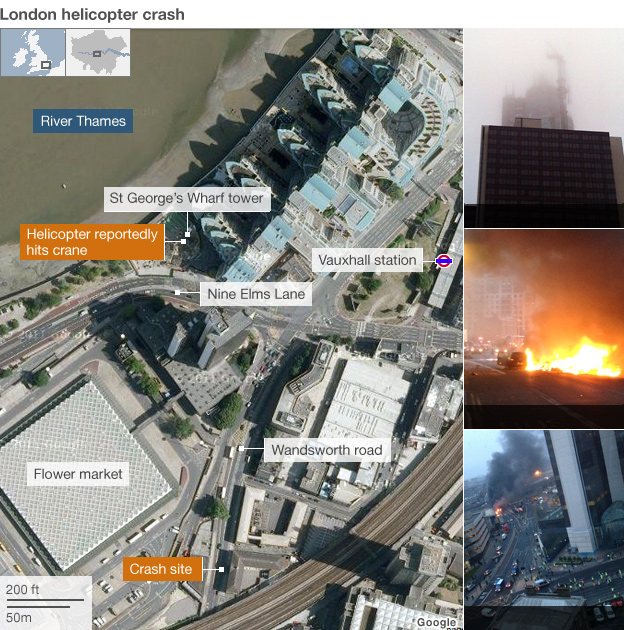 Kate Hoey, Labour MP for Vauxhall, said : “My initial thought was that it might have hit one of the many densely populated tall buildings. To hear it had hit the crane was a relief in some way.

“Police said to me that their first fear was it was the police helicopter, however, it had been grounded because of the weather.”

She told the BBC the rapid increase in the number of tall buildings in London meant more rigorous controls over who can fly where may be needed.

She said there was no reason why there should not be a debate about why so many helicopters are allowed to fly over central London.

A CAA spokesperson said:
“Helicopter operations in central London are strictly controlled. Single engine helicopters are required to fly along designated routes, which have been selected to provide maximum safety by routing helicopters along the river Thames, avoiding flying over built up areas as much as possible. Twin engine helicopters can operate in wider areas, however all aircraft operating in central London are subject to air traffic control clearance.“There are requirements for lighting on tall structures. In addition, where appropriate, very tall structures are also notified to pilots for flight planning purposes, as was the case with the crane that was involved in this morning’s accident.

“The independent Air Accidents Investigation Branch is now investigating today’s accident to establish the facts. The CAA will be providing any assistance required.”

For background:
For more information journalists should contact the CAA press office on 020 7453 6030.

More information about the CAA’s regulation of helicopters operating in London can be found  here:

In January 2012 there were approximately 1300 helicopter movements in central London.

The CAA is the UK’s specialist aviation regulator. Its activities include: making sure that the aviation industry meets the highest technical and operational safety standards; preventing holidaymakers from being stranded abroad or losing money because of tour operator insolvency; planning and regulating all UK airspace; and regulating airports, air traffic services and airlines and providing advice on aviation policy from an economic standpoint.

All helicopters flying in the London (Heathrow) and London City Control Zones (CTRs), are subject to an Air Traffic Control (ATC) clearance and particular visibility minima.  In the main, pilots navigate by visual reference to ground features with only limited ATC Radar assistance.  Single-engined helicopters are required to fly along designated helicopter routes.  These routes have been selected to provide maximum safety by avoiding flying over built up areas as much as possible.  However, it should be noted that multi-engine helicopters can be provided with an ATC clearance to transit on more direct routes through the CTRs.

The Police and the Helicopter Emergency Medical Services (HEMS) operate multi-engined helicopters, but their operations are subject to special requirements associated with the nature of the tasks they are performing.  Therefore, Police and HEMS helicopters may need to operate at lower altitudes or hold over specific locations.

Statistics for Helicopter Operations Over London

View the Helicopter Routes in the London Heathrow & London City CTR. Diagram extracted from the the UK AIP.   View Diagram

This shows the location of the Battersea heliport, that the helicopter was flying towards from the east.
http://www.londonheliport.co.uk/londonheliport_howtofindus.html