On 18th December the Welsh First Minister, Carwyn Jones announced that the Welsh government wanted to buy Cardiff Airport from its current owners, TBI.  He said they would be working towards a purchase over the next few months. and hoped the airport would be run on a commercial basis by an independent commercial operator on behalf of the government. Conservatives are calling on the Welsh government to prove that buying Cardiff Airport would be good value for the taxpayer, and see it as Labour’s attempt to “nationalise” the airport.  Cardiff airport has had declining passenger numbers, down 13% in 2011 to a little over 1.2m, while passengers at Bristol increased by 1%. There was a further fall in the first half of 2012 to 440,000 from 558,000 – partly due to the departure of bmibaby. Despite assurances that it will not receive subsidies or burden the taxpayer, there have been questions about whether public ownership will succeed in turning around the airport’s fortunes. 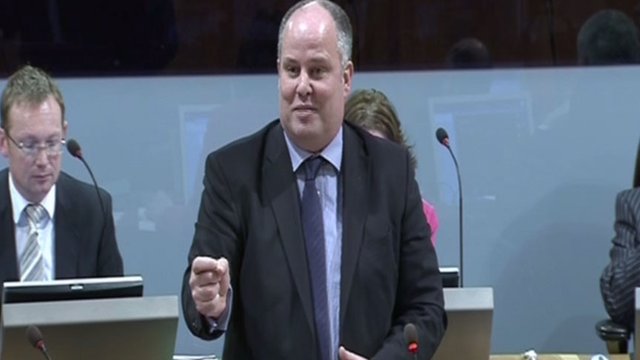 Conservatives are calling on the Welsh government to prove its plan to buy Cardiff Airport will be good value for the taxpayer.

Tory AMs used a debate in the assembly to attack what they called Labour’s attempt to “nationalise” the airport.

But ministers have defended their plans, saying they have public opinion on their side.

They expect the deal to be completed in the coming months after negotiating an agreement with the current owners TBI.

First Minister Carwyn Jones, who announced last month that the Welsh government plans the buyout, has been sharply critical of the airport, which has seen declining passenger numbers.

The total was down 13% in 2011 to a little over 1.2m. Over the same period, passenger numbers at its nearest competitor, Bristol Airport, rose 1% to more than 5.7m.

A price for the deal has not been announced, but Mr Jones insists a commercial operator will be brought in to run the airport if the sale goes through.

Sources say the cost, which will be met from existing Welsh government budgets, is likely to be in the “tens of millions”.

Despite assurances that it will not receive subsidies or burden the taxpayer, there have been questions about whether public ownership will succeed in turning around the airport’s fortunes.

The Confederation of British Industry (CBI) has warned it might not be a long-term solution and rival Bristol airport has sought assurances that Cardiff will not get state handouts.

Speaking in the Senedd on Wednesday, Tory transport spokesman Byron Davies said buying the airport was “a financial liability we do not need in this age of austerity”.

“This government is fundamentally ill-equipped to deal with the strategic direction of Wales, let alone an airport,” he said.

For the Liberal Democrats, Eluned Parrot said she had no philosophical objection to a publically-owned airport, but she had seen no evidence it would mean more flights for passengers, represent good value for money for taxpayers or benefit the economy.

The first minister’s “immoderate rhetoric” about the airport had “scared away any airlines that may have been interested in running flights from Cardiff”, she added.

Plaid Cymru AM Rhodri Glyn Thomas said the airport should be a gateway to Wales, but “it is failing entirely”.

Although something had to be done about it, he said that after publically criticising the airport for months the first minister “has been forced into a position where he had to take action”.

Business Minister Edwina Hart said negotiations about buying the airport were commercially confidential and that she could not provide a “running commentary” on them.

The government had a good working relationship with the current owners, she told AMs.

“Nobody has been put into a corner, I can assure you,” she said.

The purchase will go ahead if the due diligence process satisfies ministers that it represents a “sound investment”.

On Tuesday, Mr Jones defended the move when he faced AMs in the Senedd chamber for the first time since announcing the plan.

He said the Welsh government was “proud of the fact that we have secured the future of Cardiff Airport” and claimed the Conservatives were “out of touch with public opinion”. 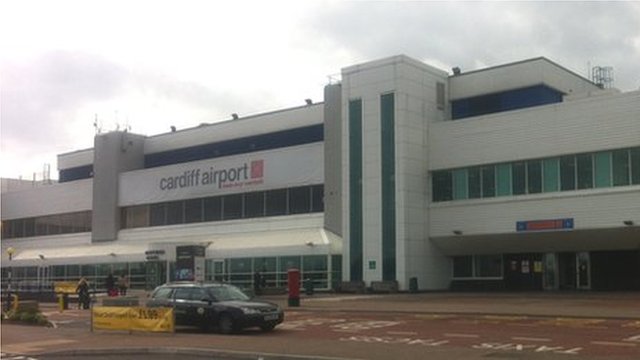 He said an agreement had been reached with owner TBI and it will work towards a purchase over the next few months.

The airport would be run on a commercial basis by an independent operator on behalf of the government.

It will not receive subsidies and should make a “return to the Welsh taxpayer”, Mr Jones said.

Plaid Cymru welcomed the announcement and said the airport needed to be a “shopfront” for Wales, but Conservatives demanded evidence that nationalisation would provide value, and Liberal Democrats warned it would become a “money pit” for public funds.

Mr Jones said: “Over the past 12 months, I have repeatedly emphasised the importance to Wales of a dynamic international gateway airport in Cardiff.

“During the course of the year we have developed a very constructive and positive relationship with TBI. Together we have been discussing how best to develop the airport to position it for the challenges ahead.

“Such an arrangement would enable us to develop a more coherent approach to our national infrastructure planning, and integrate the airport into our wider economic development strategy.”

In a statement the airport said the option of selling had emerged during months of discussions.

Mr Jones said the deal would be met from within the Welsh government’s existing budget and would not require borrowed money.

He declined to say how much the deal would cost but Welsh government sources said it was likely to be “tens of millions”.

The first minister said the government would “set the direction for the airport” after taking ownership.

“It’s not our role to physically run it from day to day. That’s something for a commercial operator,” he said.

The operator will be chosen through a tender process. Mr Jones said the government would work with the company that gets the contract to develop and attract new routes.

Long haul routes to Dubai and other places in the Middle East would be very useful, he said, as would flights to North America.

But the first priority was to increase the footfall of passengers. “That means more short haul in the short term,” Mr Jones said.

“We have to make sure that we can secure the future of what is Wales’ only international airport,” he told a news conference.

He stressed that the aiport would be run as a commercial operation without a subsidy from the government, adding: “We of course expect the airport to demonstrate a return to the Welsh taxpayer in return for the investment that we would look to put in, subject to the work that I have outlined being taken forward.”

The first minister has been sharply critical of the airport in recent months, and in doing so he said he was reflecting the “many many emails and conversations that I have had from members of the public”.

Asked if the government had similar plans for other areas of transport, such as the railways, Mr Jones said the airport deal was a “one-off”.

Business Minister Edwina Hart said: “The message from business leaders and tourism operators across Wales is clear: strong, international transport links are vital to our prosperity, and key to future economic growth.”

Plaid Cymru leader Leanne Wood, who in October called for the government to take a stake in the airport, said: “Cardiff needs to see the development of our international airport so that it is run properly, that it offers a wide choice of destinations at affordable prices and is a good shopfront for people visiting this country.

“Cardiff Airport, in its current state, offers none of these things.” 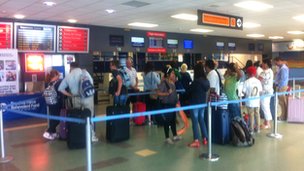 However she said attention must be paid to global warming, and hoped to see passengers switch to using Cardiff from other airports rather than an overall increase in the number of flights.

Liberal Democrat Eluned Parrott questioned whether buying the airport would reverse the decline in passenger numbers.

“The kind of investment called for by the Welsh government over the last year is no more affordable to taxpayers than it is to private businesses.

“I feel the airport will simply become a money pit, sucking in public funds at a time of economic restraint which will deliver no obvious return,” she said.

Conservative Byron Davies said the first minister had taken “every opportunity to run down and force it into a position of weakness and thereby making it vulnerable to Welsh government takeover”.

He added: “The first minister must now provide evidence of value for money and demonstrate that nationalisation will restore confidence to Wales’ only international airport.

“Welsh Conservatives will be scrutinising the government’s due diligence operation and we remain to be convinced that the figures add up.”

Troubled Cardiff Airport is facing the prospect of a direct hourly bus service between south Wales and its nearest rival in Bristol.

Holidaymakers in Swansea, Cardiff and Newport will be able to catch a coach to Bristol Airport, 24 miles (38km) from the Welsh border, from March.

The Welsh capital’s airport has seen a steady decline in passenger numbers in the last five years.

Last month the Welsh government said it planned to buy the airport.

The Greyhound coach firm, which already operates between Swansea and Cardiff, is extending the route to call at Newport railway station, and the service will end “just metres” from Bristol Airport’s check-in hall.

Bristol Airport chief executive Robert Sinclair told The Wales Report on BBC Wales TV: “We are delighted First [Greyhound’s owner] has taken this step to enhance connectivity for people and businesses in Wales.

“This is an exciting new addition to the public transport options available for passengers in an important part of our catchment area.”

He added: “The new Greyhound UK service will enable people in south and west Wales to access the extensive range of destinations available from Bristol Airport.”

Mr Sinclair said that the service would benefit south Wales’ economy by allowing in-bound visitors to reach tourist destinations like the Millennium Stadium in Cardiff and Swansea’s Liberty Stadium.

The journey time from Swansea bus station to Bristol Airport has been put at two hours and 45 minutes, while the stage from Cardiff to Bristol will take an hour and 40 minutes.

The Welsh government announced last month that it intended to buy Cardiff Airport from Abertis, its Spanish owner, in attempt to increase routes and encourage more people through its gates.

The deal is expected to be completed in the coming months.

A price has not been announced, but First Minister Carwyn Jones insists a commercial operator will be brought in to run the airport if the sale goes through.

Mr Jones has been sharply critical of the airport.

Last week, the Conservatives in the Welsh assembly called on the Welsh government to prove its plan to buy Cardiff Airport would be good value for the taxpayer.

But ministers defended their plans, saying they have public opinion on their side.