Lithium-ion batteries used in the 787are central to the design of a plane which is billed as being lighter and 20% more fuel efficient than earlier generations of jet. This type of battery has an unusually high energy density, so units can be smaller and thus lighter for a given amount of power than traditional batteries. All planes have batteries, but the Dreamliner needs especially powerful ones because its control systems are driven entirely by electrical signals in place of the hydraulic controls. Boeing is not the only aircraft maker to use lithium batteries – there is one such battery on the Airbus A380 but the Dreamliner features these batteries on a much more extensive scale than other recent planes. Lithium ion batteries can be prone to “thermal runaway”. Once the battery reaches a certain temperature, it can start self-heating with potentially disastrous results. The units are also seen as especially vulnerable to problems and leaks of battery fluid. Once the problems start, the fluid is prone to ignite. Boeing has bet its future on the success of the 787 and needs to sell 1,000 to break even. 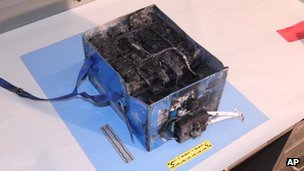 The lithium-ion batteries used in Boeing’s 787 Dreamliner are central to the design of a plane which is billed as being lighter and 20% more fuel efficient than earlier generations of jet.

This type of battery has an unusually high energy density, which means the units can be smaller and thus lighter for a given amount of power than traditional batteries.

All planes have batteries, but the Dreamliner needs especially powerful ones because its control systems are driven entirely by electrical signals in place of the hydraulic controls seen on earlier generations of jet.

To meet the need for low weight and high power output, the designers opted for the same lithium ion technology as used in the batteries of most modern smartphones and laptop computers, where the demands are rather similar, but on a much smaller scale.

Lithium-ion units have another big advantage: they can be moulded into a variety of shapes. This flexibility means the battery can be designed to fit in awkward places, important when space is at a premium.

Boeing is not the only aircraft maker to use lithium batteries – there is one such battery on the Airbus A380 superjumbo, but the Dreamliner features these batteries on a much more extensive scale than other recent planes.

During the design phase, regulators expressed concerns and insisted on a new specially drawn-up set of regulations to ensure battery safety.

Lithium ion units were already known to have a number of potentially serious safety drawbacks. They need more careful management than other types of battery.

In recent years, there have been cases of battery packs on laptops and smartphones smoking and catching fire. Problems of this nature on some Sony Vaio laptops drew considerable media attention some years ago.

Unless carefully managed, Lithium ion batteries can be prone to what is referred to as “thermal runaway” due to the nature of its chemistry.

Once the battery reaches a certain temperature, it can start self-heating with potentially disastrous results. 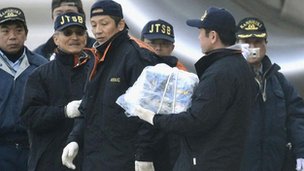 The units are also seen as especially vulnerable to problems and leaks of battery fluid. Once the problems start, the fluid is prone to ignite.

As yet, it is not clear what caused the two battery incidents that led to US regulators ordering the 787 to be grounded. It could be the batteries themselves, the charging system or the plane’s electrical system.

Experts say the problems with the batteries are unlikely to be of a fundamental nature that requires the plane to be redesigned or the batteries entirely replaced. The chances are it is a manufacturing issue or a failing in how the battery packs are looked after.

Boeing has bet its future on the success of this plane, which has taken many years and billions of dollars to develop. It reportedly needs to sell a thousand of them just to break even. This will be a nervous time at Boeing HQ even though it is likely the battery issues probably can be rectified without a fundamental redesign.

.
And excerpts from Scientific American blog:

Lithium-Ion Battery Fires Could Turn Boeing Dreamliner into a Nightmare

The FAA on Wednesday ordered U.S. operators to temporarily ground the aircraft to avoid the risk of additional battery fires.

Before any Dreamliners resume flight, operators of U.S.-registered 787s will have to demonstrate to the FAA that the batteries are safe. “These battery problems, if not corrected, could result in damage to critical systems and structures, and the potential for fire in the electrical compartment,” according to a statement issued by the FAA, which says it is investigating. The statement makes no mention of GS Yuasa Corp., the company that makes the 787’s batteries, nor does it call upon Boeing specifically to demonstrate battery safety.

In addition to reviewing the aircraft’s design, manufacture and assembly, the FAA says it also will validate that batteries and the battery system on the aircraft comply with the “special condition” the agency issued as part of the 787’s certification.

This condition was that Boeing take a series of protective measures to ensure the batteries wouldn’t fail, causing the exact same problems the company now faces. The 787’s short history has been filled with battery and mechanical problems, as outlined in Patrick Smith’s “Ask the Pilot” January 16 blog post.

The 787 relies on two identical lithium-ion batteries, each about one and a half to two times the size of a typical car battery, The New York Times reported on Thursday.

One battery starts the auxiliary power unit (a small tail engine that provides power for the plane while on the ground), and the other starts the pilot’s computer displays and serves as a backup for flight systems.

The 787 Dreamliner is a midsize aircraft capable of flying longer nonstop routes with cleaner, more humid cabin air pressurized to make passengers feel as though they are at 1,800 meters, instead of the usual 2,400 meters. Such modifications are made possible by the use of carbon fiber, which is stronger, lighter and rust-resistant compared with the typical aluminum fuselage. This strength also enables Boeing to make the aircraft with larger windows that feature electrochromic shading that automatically darkens in bright sunlight. In 2011, after a three-year delay, the 787 became the first commercial aircraft with a shell made primarily of carbon fiber, which promises 20% fuel savings for airlines.

Lithium-ion batteries—used to power mobile phones, laptops and electric vehicles—have summoned plenty of controversy during their relatively brief existence. Introduced commercially in 1991, by the mid 2000s they had become infamous for causing fires in laptop computers.

More recently, the plug-in hybrid electric Chevy Volt’s lithium-ion battery packsburst into flames following several National Highway Traffic Safety Administration (NHTSA) tests to measure the vehicle’s ability to protect occupants from injury in a side collision. The NHTSA investigated and concluded in January 2012 that Chevy Volts and other electric vehicles do not pose a greater risk of fire than gasoline-powered vehicles.

GS Yuasa says it may take months to investigate what caused the All Nippon incident,Bloomberg and the Associated Press reported Thursday. The key issue is whether the problem was caused by the battery itself or the electrical system as a whole.

Some useful info and graphics in the Daily Mail article

The National Transportation Safety Board has said that the lithium battery which caught fire in a Japan Airlines Boeing 787 was not overcharged and experts have said the cause could be because of a ‘chain of events’ on-board the troubled passenger airliner.

An examination of the flight data recorder indicated that the battery which caught fire mid flight and forced the Boeing aircraft to make an emergency landing didn’t exceed its designed voltage of 32 volts.

NTSB investigators are continuing to look at the battery system and plan to meet on Tuesday with officials from Securaplane Technologies Inc., the manufacturer of the charger for the 787s lithium ion batteries, at the company’s headquarters in Tucson, Ariz.,

Too much current flowing too fast into a battery can overwhelm the battery, causing it to short-circuit and overheat even if the battery’s voltage remains within its design limit, he said.

The new generation of light lithium batteries was going to deliver equal power at half the weight, but it appears that the chemistry inside the ‘thermal runway’ can self-heat if external temperature and pressure change, something which frequently occurs in aviation. The Dreamliner is the first airliner to make extensive use of lithium-ion batteries.


They charge faster and can be better molded to space-saving shapes compared with other aeroplane batteries.


But the electrolyte fluid also conducts electricity, so as it spreads it can cause short-circuits and ignite fires.


Its corrosiveness also raised concern about whether a leak might weaken a key support structure of the plane.


‘Unfortunately, what Boeing did to save weight is use the same batteries that are in the electric cars, and they are running into the same problems with the 787 as the problems that have shown up in electric cars.’

Dreamliner first commercial aircraft to use Lithium ion batteries, with their overheating risk

It’s not yet clear whether the problems in the 787s originated with the batteries themselves. Faults in the electronic controls have been implicated in other lithium-ion battery fires. According to reports, inspectors found liquid leaking from the 787’s batteries after the forced landing in Japan. The battery was also discolored, but it wasn’t clear if it had caught fire. Lithium-ion batteries have been known to cause fires in cell phones, laptops, and electric vehicles. But such problems are rare, and usually result from damage to the battery—such as piercing or overcharging—or problems with the manufacturing process that introduce flaws in the cells. According to the website of the company that supplied the Dreamliner batteries, these use lithium cobalt oxide electrodes. These are known for high-energy storage capacity, but other battery chemistries, such as lithium iron phosphate, are more resistant to overheating. Because of safety concerns, many electric vehicle makers have shifted to alternative chemistries, sacrificing some energy storage capacity. The Dreamliner is the first commercial aircraft to use lithium ion batteries.