On February 19th, Europe’s emissions-trading system (ETS) faces a potentially fatal vote. A European Parliament committee will vote on whether to back a Commission plan to remove some of a huge surplus of carbon allowances from the ETS.  It would delay the sale of about 900m tonnes of carbon allowances from around 2013-16 to 2019-20, and  give the EC the power to rearrange the ETS’s schedule of auctions.  Thirty firms and organizations have written to European policy-makers urging them to vote in favor. Opposition to the proposal has been led by heavy industry and EU member Poland, which is highly dependent on carbon-intensive coal and argues there is no case for intervention in the market. The vote could not only determine whether the world’s biggest carbon-trading market survives but delay the emergence of a worldwide market, damage Europe’s environmental policies across the board and affect the prospects for a future treaty to limit greenhouse-gas emissions. However, even if the sale of the 900m tonnes was delayed, the oversupply of allowances would continue unless the auctions were cancelled, not just rescheduled.

Crunch time for the world’s most important carbon market

ON FEBRUARY 19th, Europe’s emissions-trading system (ETS) faces a potentially fatal vote. It could not only determine whether the world’s biggest carbon-trading market survives but delay the emergence of a worldwide market, damage Europe’s environmental policies across the board and affect the prospects for a future treaty to limit greenhouse-gas emissions. Quite a lot for a decision which—as is the way of things European—sounds numbingly technical.

The vote is due to take place in the environment committee of the European Parliament. If the committee approves the proposal before it (and the parliament in full session as well as a majority of national governments agree with the decision), this would give the European Commission, the European Union’s executive arm, the power to rearrange the ETS’s schedule of auctions. Its plan is to delay the sale of about 900m tonnes of carbon allowances from around 2013-16 to 2019-20. 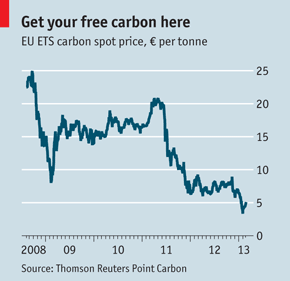 The vote matters, its sponsors argue, because the ETS could collapse if the commission’s proposal is rejected. The ETS is the only EU-wide environmental instrument. It trades allowances to produce carbon equal to about half the EU’s total carbon emissions. When the system was set up, its designers thought these allowances would now cost roughly €20 per tonne of carbon. The current price is around €5 ($6.7), and in January it fell by 40% in a few minutes after a negative, but legally meaningless, parliamentary vote (see chart).

The low prices reflect a chronic oversupply of carbon allowances, which the commission puts at 1.5 billion-2 billion tonnes, roughly a year’s emissions. When the ETS was designed in the mid-2000s, growth was strong and demand for carbon allowances was expected to be high. Their number was therefore fixed (at 16 billion tonnes for 2013-20). But demand has crashed. Other temporary factors are also driving prices down: more frequent auctions mean that allowances which once sat unused for months now come onto the market immediately; a special reserve for new entrants has boosted supply; and hedging by power stations has dried up.

Yet none of this justifies interfering in the market, opponents of the commission’s plan say. The ETS remains liquid; the emissions cap stays in place. A low carbon price simply means the aims of the ETS are being met cheaply. What’s the problem?

The commission highlights two. First, if the proposal is thrown out, the ETS could collapse completely: ie, the carbon price could fall to zero. Second, and more likely, even a further, temporary slide in the price could do permanent damage.

When carbon prices are low, coal is cheap relative to cleaner forms of energy, such as gas. As a result power suppliers build more coal-fired plants and Europe emits more carbon. This is already happening. In the long run carbon prices are likely to rise again: industrial demand will pick up (one day); and the cap (the supply of carbon allowances) is due to be lowered by 1.7% each year. But by the time this has an effect—not before 2026, says Guy Turner of Bloomberg New Energy Finance, a firm of market analysts—the coal plants will be running and expensive to turn off. Their owners will be lumbered with “stranded costs”. Power generators, which are the main buyers of ETS allowances, say a higher carbon price would help them avoid this problem by spurring investment in new technologies.

A lot of people beyond Europe are anxiously awaiting next week’s vote. Australia’s carbon price, which it established in 2012, is currently fixed. If the ETS remains weak, Australia’s carbon price will not soar in 2015 when it will be allowed to float and the country’s carbon market will be linked to the larger European one. But if the ETS collapses, it will encourage further opposition to the already-controversial Australian scheme, worries Tom Brookes of the European Climate Foundation, an environmentalist group.

A collapse could also affect California, which set up a carbon market in 2012, as well as China and South Korea, which are putting together theirs. And it would undermine the chances that all these markets might one day form a global carbon-trading system.

Back in Europe, other environmental policies could suffer. A low carbon price would slow down Germany’s ambitious plan to boost renewable energy and a high one would speed it up. Perhaps reflecting this, the German government is split on the vote. A collapse of the EU’s flagship policy would also throw into disarray European plans for future environmental reforms—and its hopes of leading other countries by example.

Even if the proposal goes the commission’s way, that would not change the ETS fundamentally. The oversupply of allowances would continue unless the auctions were cancelled, not just rescheduled. But that is a battle for another day.

(Reuters) – Thirty firms and organizations have written to European policy-makers urging them to vote in favor next week of a plan to support the European Union’s Emissions Trading Scheme (ETS), which has sunk to record lows.

A European Parliament committee votes on February 19 on whether to back a Commission plan to remove some of a huge surplus of carbon allowances from the EU ETS.

Opposition to the proposal has been led by heavy industry and EU member Poland, which is highly dependent on carbon-intensive coal and argues there is no case for intervention in the market.

EU business body Business Europe also opposes the Commission’s plan, which is designed to be an emergency fix and a prelude to deeper reform.

The signatories of the letter seen by Reuters, dated February 14 and addressed to members of the European Parliament, say that without agreement on the Commission proposal, the price of carbon allowances will fall further “threatening the long-term survival of the ETS”.

It calls on next week’s parliamentary committee and also a separate committee meeting of member states to back the Commission proposal urgently “so that the EU ETS as a whole remains the cornerstone of the EU climate and energy policy”.

EU carbon allowances sank below 3 euros last month to their lowest yet. On Wednesday, they rallied to just above 5 euros as traders speculated that next week’s vote would be positive.

In an earlier letter from Business Europe, dated February 6, that organization opposed the Commission’s plan to remove temporarily some of the glut of permits, saying the EU ETS should be left to work “according to market principles” and that its weakness was mainly a result of economic crisis.