Ryanair is planning to increase its aircraft fleet by 175 planes. That is adding about a third to the 305 planes it owns, bringing the total to around 380.  The order with Boeing is worth some £10.3bn and is Ryanair’s biggest and the biggest by any European airline.  It will allow some of the older planes to be retired.  Ryanair, which flew some 79  million passengers in 2012 link, says it wants to increase its passenger numbers to 100 million a year.  The order is for the current generation 737s, whose 737-800 model list price is around $89m each.  Some 75 aircraft will replace Ryanair’s existing fleet of 737s. Ryanair has only Boeing planes. Ryanair says “These 175 new planes will enable us to lower cost and airfares further.” Michael O’Leary said “They provide Ryanair with the additional capacity to exploit substantial growth opportunities that currently exist as many of Europe’s flag carrier and smaller airlines are restructuring and reducing their short-haul operations.”


Ryanair to expand by 30% with bumper Boeing order 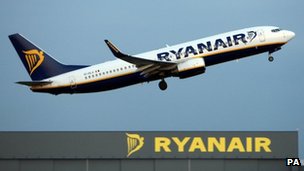 Ryanair is planning to increase its aircraft fleet by a third to 400 planes after placing an order with Boeing for 175 planes worth $15.6bn (£10.3bn).

The airline currently has 305 planes. The order will allow older ones to be retired.

The move is a boost for the US planemaker after rival Airbus received a record $24bn order from an Indonesian airline on Monday.

Ryanair hopes to increase its passenger numbers to 100 million a year.

Ryanair, which has has always favoured Boeing aircraft and remains one of the few all-Boeing carriers, said it had received a discount on the price, but did not reveal how deep a discount.

The order is for the current generation 737s, whose 737-800 model list price is $89.1m, but large orders typically involve a discount, which could cut the price paid to half that.

The deal softens the missed opportunity from Indonesia’s Lion Air, as that company had previously given Boeing its own record order.

Boeing’s reputation has taken a blow in recent months after its latest Dreamliner 787 planes were grounded after batteries on some planes emitted smoke.

Flights of these are expected to restart within weeks.

Boeing’s head of commercial airplanes Ray Conner said at a joint news conference with Ryanair on Tuesday that the problems with the 787s had not affected orders.

He added that they were working hard to get the issue sorted out.

Ryanair chief executive Michael O’Leary said he was happy to back Boeing: “Hopefully it will help refocus people’s minds on the fact that Boeing continues to deliver great aircraft and is growing strongly, rather than a minor issue on the 787.”

Donal O’Neill, an analyst with Goodbody Stockbrokers in Dublin, said the order was good for both sides: “This order puts Ryanair back on track for growth at a time when many European airlines are shrinking.

“For Boeing it keeps a major customer on board and helps position it to hook Ryanair for an order of the [next-generation] 737-Max in a few year’s time.”

Ryanair’s expansion is expected to have taken place by 2018 and the company said if demand kept growing it could build further on the order with another.

Ryanair’s shares were 4% higher in afternoon trading, while Boeing’s were 0.5% higher.

Low-fare carrier Ryanair has announced a £10bn deal for scores of new planes in an agreement which will create 3,000 jobs across Europe.

Promising even lower fares, the Irish no-frills airline said it was taking 175 new Boeing 737-800s as it aims to fly more than 100 million passengers a year by the beginning of 2019.

Some 75 aircraft will replace Ryanair’s existing fleet of 737s – the “workhorse of the skies”.

Ryanair chief executive Michael O’Leary said: “We are pleased to sign this agreement with Boeing which will expand our fleet to over 400 units, creating over 3,000 new jobs for pilots, cabin crew and engineers, while allowing us to grow our low-cost airline service by about 5% per annum over the next several years.

“Ryanair is proud to buy Boeing, who have always made great aircraft and the 737-800 has been the cornerstone of Ryanair’s success due to its great engineering and phenomenal reliability. These 175 new planes will enable us to lower cost and airfares further.”

The Ryanair announcement follows news earlier this week that Indonesian budget carrier Lion Air was taking 234 of the A320 family of aircraft made by European plane-maker Airbus.

French President Francois Hollande said the contract, worth around £15.8bn, would secure 5,000 jobs over 10 years.