Boeing has unveiled a series of enhancements to the lithium-ion batteries used onboard its B787 aircraft, as it tries to return the Dreamliner to service. All 50 Dreamliners currently in operation were grounded in January, following concerns surrounding the safety of onboard batteries.  The US FAA has approved a plan to redesign the 787 lithium-ion batteries but have given no indication of when the planes might be allowed to carry passengers again. Boeing has now set out a “a comprehensive set of improvements that will add several layers of additional safety features to the lithium-ion batteries”, and said that these enhancements are in production and “could be ready for initial installation within the next few weeks”. The question is, bearing in mind that these improvements are only made because of the acknowledged higher risk of fire from these batteries, whether customers are going to want to fly in these planes, knowing there are batteries with a un-proven track record on fire situated below the passenger cabin.

Boeing has unveiled a series of enhancements to the lithium-ion batteries used onboard its B787 aircraft, as the manufacturer works towards returning the Dreamliner to service.

All 50 B787 aircraft currently in operation were grounded in January, following concerns surrounding the safety of onboard batteries.

Boeing has now detailed “a comprehensive set of improvements that will add several layers of additional safety features to the lithium-ion batteries”, and said that these enhancements are in production and “could be ready for initial installation within the next few weeks”.

Boeing said the improvements are currently undergoing “extensive certification testing”, and will allow operators to resume commercial Dreamliner flights “as soon as testing is complete and the US Federal Aviation Administration (FAA) and other international regulators grant their final approval”.

Boeing Commercial Airplanes president and CEO Ray Conner said the company was “moving out on an effort to resume deliveries”, but stressed that “completing our certification work and getting the delivered fleet flying again is our first priority”. Conner added that  “Our customers and their passengers have been incredibly patient as we have worked through this process and we thank them very sincerely for their continued support and confidence in the 787”.

Earlier this month Thomson Airways – the first British carrier scheduled to take delivery of the Dreamliner – announced that it was delaying its May 1 launch of the aircraft. 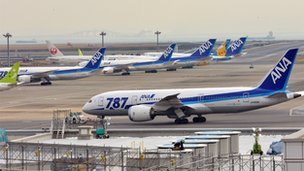 The US airline regulator has approved a plan to redesign the lithium-ion batteries of the Boeing 787 Dreamliner.

The Federal Aviation Administration (FAA) approved Boeing’s plan, which it said requires it to “conduct extensive testing and analysis”.

But the FAA gave no indication of when the planes might be allowed to carry passengers again.

All 50 Dreamliners in operation were grounded after the batteries emitted smoke on several separate occasions.

The plane is the first plane in the world to use the lithium-ion batteries, which are lighter, hold more power and recharge more quickly.

The FAA has also approved limited test flights for two aircraft to test the changes in the batteries.

“This comprehensive series of tests will show us whether the proposed battery improvements will work as designed,” said US Transportation Secretary Ray LaHood. “We won’t allow the plane to return to service unless we’re satisfied that the new design ensures the safety of the aircraft and its passengers.”

Boeing chief executive Jim McNerney said in a statement: “Our top priority is the integrity of our products and the safety of the passengers and crews who fly on them.

“Our team has been working around the clock to understand the issues and develop a solution based on extensive analysis and testing following the events that occurred in January.”

Mr McNerney described the FAA’s approval as “a critical and welcome milestone toward getting the fleet flying again and continuing to deliver on the promise of the 787”.

The 787 is said to be one of the most fuel-efficient in the industry, and Boeing delivered 46 Dreamliners to customers in 2012.

But a series of events in January brought its safety into question.

Problems occurred on several planes owned by Japanese airlines. One plane had a cracked cockpit window, another had a fuel leak and a third plane made an emergency landing after a smoke alert went off.

On 7 January, a fire started in a lithium-ion battery pack of a Japan Airlines 787 in Boston, prompting the US regulator to step in and ground the 787s.

The Dreamliner Battery Fire Was Far Worse Than Officials Let On Firefighters and mechanics tried repeatedly to put out a battery fire aboard a Boeing787 Dreamliner through smoke so thick they couldn’t see the battery, according to documents released Thursday that portray the incident as more serious than previously described.

The Jan. 7 fire at Boston’s Logan International Airport is under investigation by the National Transportation Safety board, which released laboratory analyses, interviews and other data it has gathered so far. It still hasn’t been able to pinpoint the cause.

Federal Aviation Administration officials are expected to make a decision in the next few days on whether to approve a plan by Boeing to revamp the 787’s lithium ion batteries to prevent or contain future fires. Once the plan is approved, Boeing hopes to swiftly test the reconfigured batteries and get the planes back in the air.

Dreamliners worldwide have been grounded since a second battery incident led to an emergency landing in Japan nine days after the Boston fire. The incidents have raised questions about the safety of using lithium ion batteries, which are more susceptible to igniting if they short-circuit or overheat than other types of batteries. The episodes also have called into question the FAA’s process for certifying the safety of new aircraft designs.

The Boston fire occurred aboard a Japan Airlines plane that had just landed after an overseas flight and was parked. A flight data recorder shows the battery used to start the auxiliary power unit when the plane is on the ground failed six minutes after the last of the 184 passengers walked off the plane, and one minute after the pilots left. Moments later a cleaning crew discovered smoke near a kitchen in the rear of the plane.

A mechanic investigating the source of the smoke in an electronics bay found intense smoke and three-inch flames in two places on the housing covering the battery. Attempts to put out the flames with a dry chemical fire extinguisher were unsuccessful.

The first firefighter to enter the plane reported seeing “a white glow about the size of a softball” through the smoke using his hand-held heat-imaging camera. He applied another type of fire extinguishing agent, which somewhat reduced the glow. An airport security camera video showed white smoke billowing from the underside of the plane.

Another firefighter entering the electronics bay reported “no visibility” because of the smoke and directed another burst from a fire extinguisher at a hot spot, but the battery seemed to rekindle. A fire captain applied the extinguisher again for about five minutes, reducing the fire. But the battery was still emitting heavy smoke and hissing loudly. Liquid was flowing down its side. Lithium ion batteries contain a flammable electrolyte.

Firefighters finally decided to remove the battery from the plane, but its “quick-disconnect knob” was melted, hampering the process. Investigators later found little balls of melted and cooled stainless steel, apparently from the cases of the battery’s eight cells. That type of steel melts at 2,700 degrees Fahrenheit, one document noted. The bottom of the battery box was bent from where firefighters pried it out.

In all, it took an hour and forty minutes to quell the fire.

The report said several kinds of battery failures can cause the battery to smoke. Those include short circuits, recharging a battery that has been allowed to discharge too far and charging at cold temperatures. But unless something outside the battery ignites it, only overcharging it will cause it to burn, according to a report by NTSB engineer Mike Hauf, citing a Boeing safety assessment.

That raises the question of whether there were different causes for the fire in Boston and the Jan. 16 incident aboard an All Nippon Airways plane, where the battery smoldered but flames were not reported.

ANA confirmed this week that it replaced three circuit boards located in 787 electronics bays after pilots received an error message during flights in March, April and June of last year. One of those circuit boards had a “slight discoloration,” said ANA spokeswoman Nao Gunji. Nothing wrong was found with the other two, but they were replaced as a precaution, she said.

The tests included a fault tree analysis, which looks at what happens as things successively go wrong with a battery. The tests were reviewed by Boeing workers, as well as another group of Boeing workers who are the FAA’s authorized representatives to make sure the batteries met FAA requirements.

Boeing classified the possibility of a battery fire as “catastrophic” and built in extra safeguards to prevent overcharging.

The 787 is Boeing‘s newest and most technologically advanced plane. It is the world’s first airliner made mostly from lightweight composite materials. It also relies on electronic systems rather than hydraulic or mechanical systems to a greater degree than any other airliner. And it is the first airliner to make extensive use of lithium ion batteries, which are lighter, recharge faster and can hold more energy than other types of batteries.

Boeing has billed the plane to its customers as 20 percent more fuel efficient than other midsized airliners. That’s a big selling point, since fuel is the biggest expense for most airlines.

Airlines have been forced to tear up their schedules while the planes are out of service. United Airlines recently cut its six 787s from its flying plans at least until June and postponed its new Denver-to-Tokyo flights. United is the only U.S. carrier with 787s in its fleet.

LOT Polish Airlines has said the grounding of its two 787s is costing it $50,000 per day. The airline has said it will ask Boeing for compensation. Norwegian Air Shuttle, which was due to receive 787s this year, said it will lease two Airbus A340s along with flight crews for its planned New York-to-Bangkok flights if it doesn’t get its 787s on time. The airline is allowing customers on 787 flights to change their flight date or get a refund, but “very few have taken advantage of this offer,” spokesman Laase Sandaker-Nielsen said Thursday.

Boeing is still building 787s, but deliveries are halted. It has not said how much the battery problems will cost.

UBS analyst David Strauss estimated Boeing will burn some $6 billion in cash on the 787 this year — and that’s even if it delivers more than 60 of them. Every missed 787 delivery adds as much as $120 million to the plane’s cash burn this year, he estimated in a note on Tuesday.