A form of grass – with the trade name Avanex – has been developed by a firm in New Zealand, Grasslanz Technology and commercialised by PGG Wrightson Turf. It has been designed to be endophytic, which means it incorporates a form of  fungus that produces a high amount of alkaloids. This makes the grass distasteful to insects, and so the areas sown with this grass have no or few insects, and consequently few birds. The grass can be toxic to animals and comes with health warnings about livestock eating it.  However, airports are enthusiastic to use the grass in order to deter birds and hence the risk of bird strike. The grass has so far been trialled in New Zealand airports since 2010 and found to cut bird numbers by large amounts, making airports very sterile areas, which is what the airport operators want. However, the blurb says “The grass could also be used at sports stadiums, golf courses and even domestic lawns,” so the company wants to use its biodiversity-destroying product even more widely. 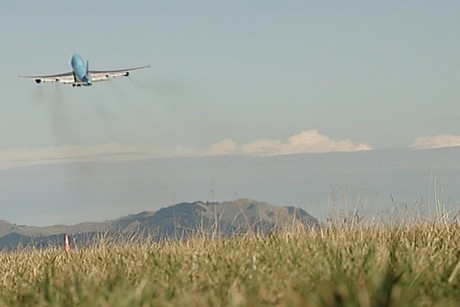 The grass has been trialled at New Zealand airports since 2010

New Zealand scientists are taking a new kind of grass to the global market, a grass which promises to reduce bird-strikes at airports and potentially save the aviation industry millions of dollars a year.

The grass has the potential to make airports safer by reducing the number of bird-strikes – like the one that downed the US Airways fight in the Hudson River in 2009.

Andy Baxter works with airports like Heathrow to try and combat bird-strike.

“All airports around the world will have bird deterrents, people out there 24 hours a day, the key to it is to try and stop birds being present in the first place,” says Mr Baxter.

And that’s where the grass – trade-named ‘Jackel’ – comes in.

It contains a naturally occurring fungus which produces a mild toxin, so when the birds eat it they’re not harmed, but they quickly find out it doesn’t taste good.

It’s not palatable for insects either, so there’s no reason for the birds to be attracted to the grass in the first place.

It’s been trialled in New Zealand airports since 2010, and bird numbers have reduced by 70 to 90 percent.

“That will have a big impact on the amount of effort required to deter birds from airports, and hopefully reduce that bird-strike risk that as we know is capable of bringing aircraft down,” says Mr Baxter.

The global cost of bird-strikes is estimated at $1.5 billion a year.

The grass could also be used at sports stadiums, golf courses and even domestic lawns.

“This is very exciting for our business, it’s a world-leading product and the results we’re seeing so far are so sound,” says business development manager of PGG Wrightsons Mark Shaw.

So like for the birds, the sky’s the limit.

This is the grass product involved:

AVANEX® unique endophyte technology may assist in reducing the number of insects or birds on or near airfields.

AVANEX® unique endophyte technology includes two novel endophytes, one which is available in a tall fescue cultivar called Jackal and the other in a turf-type perennial ryegrass called Colosseum.

“Novel endophytes can be incorporated into elite cultivar germplasm either by an inoculation process or by breeding and selecting with plants that contain the novel endophyte strain. Novel endophytes are naturally occurring and are not genetically modified organisms.”

A GRASS that deters birdlife is poised to find major success throughout the world, particularly with airports.

It recently won the Australasian DuPont Innovation Award for Performance Materials, which recognises the commercialisation of outstanding science and technology in Australasia.

The grass will be marketed under the brand name Avanex and developed by AgResearch.

The secret behind the grass’ bird deterrent ability is a natural fungus (endophyte) that lives in the grass and produces chemicals that make birds feel sick when ingested, but does not harm them.

It has been effective in reducing bird numbers at several New Zealand airports thus minimising the risk of bird collisions with aircraft.

It has a potential for use in airports around the world, as well as orchards, sports fields and golf courses, in temperate environments.

In accepting the award on behalf of Grasslanz Technology, business development manager for the Southern Hemisphere Bruce Belgrave, said it was important to acknowledge that this innovation has been the result of a team effort involving Dr Chris Pennell, inventor and scientist with AgResearch Limited, as the inspiration behind the innovation; Christchurch International Airport, which invested in the development and allowed the first trials of the innovation on an airport; PGG Wrightson Seeds; and foundation for Arable Research, which also invested in its development.

“We are proud to be a part of the development of this exciting technology and to bring Avanex to the market,” he said.

PGG Wrightson Turf is an industry leader in the Australasian turf seed market.

The grasses that carry these endophytic properties are ideally suited to large areas of Australia, particularly the cooler temperate regions where perennial ryegrass and tall fescue is found.

Two reader comments below the article:

I and thousands of other Aussies would prefer the sound of singing birds that that of screaming aircraft noise!

And how soon before this ‘wonda grass’ gets to become a weed in pastures, causing livestock illness like the other ‘wild’ endophytic Fescues and Ryegrasses we’ve been working towards replacing over many years? And upsetting the ecosystem again by reducing beneficial insects that help us grow healthy food for the rest of the world!

Keep off the grass

GREAT GRASS: Grounds and wildlife planner Peter Robinson among the grass that keeps birds away from the airport runway.

The grass contains high levels of a symbiotic fungus that’s unpleasant for birds and insects.

It’s been developed by AgResearch and marketed under the brand name Avanex by PGG Wrightsons Turf.

It repels birds that eat insects since there’s no food for them and those that eat grass or seeds because it’s unpalatable.

The development is exciting for airports across the globe, he says.

“The damage to the industry is in the billions of dollars worldwide. If one of the big jet engines gets a medium-sized bird in it, there’s the potential to do damage up to $50 million.”

The drought-resistant grass is making big impact at the airport with the finch population down from an average of 300 birds on one day in 2011 to 185 this year. And that number could have been up to 100 birds lower had the grass been mown earlier, Mr Robinson says.

“It makes everything safer. It means we don’t have to go and dump insecticide on everything. It’s winning in so many ways, including costs.”

The airport plans to expand its coverage in certain areas, like the ends of the runway, with completion due in about five years.

But it isn’t appropriate for all areas, like the airport’s Wiroa Island bird sanctuary in the south or Renton Rd site to the north, Mr Robinson says.

Both are already effective in keeping large numbers of birds away from the runway.

“The birds need somewhere to stay. They are areas for the birds to sit and be safe.

“We own the land so can do a lot of things other airports would love to do. It’s about keeping people safe.”

There are between 1.9 to 3.1 bird strikes for every 10,000 aircraft movements each quarter at the airport.

Mr Robinson hopes the introduction of initiatives like Avanex will bring that down further.

“The grass is a little piece of a whole management strategy.

“We’ve got to the point where, without high-tech things, we’re down as far as we can go. Now we can take it to a new level.”

Finches, starlings and skylarks are the three main species airport staff keep an eye on – that gives them an idea of what’s going on with the entire bird population, Mr Robinson says

“But they also found some were very, very toxic. It was put on a shelf and they thought: `Whatever are we going to do with this’?”

That was until AgResearch scientist Chris Pennell, who is also a pilot, figured out it would be effective at places like airports.

Birds can present a safety risk if they become
caught in aircraft engines. Heathrow’s bird
hazard management team aim to make the
airport as unappealing as possible for birds
through habitat management, disturbing
birds using distress noises, letting off flares
and, as a last resort, through culling.

To avoid attracting birds, we are careful to
ensure food waste is properly disposed of
and keep the airport grass too long for most
birds to comfortably settle on, but short
enough to discourage nesting.