International engine builder Rolls-Royce did not pay any corporation tax in the UK in 2012. It reported a record year for profits ( £1.4bn in pre-tax profit in 2012, an increase of 24% on 2011) but paid nothing to the Treasury and received £3m in credit.  It paid no UK corporation tax in 2011 either.  Rolls Royce said most of its sales were abroad and its tax liability was reduced because of its investment in research and development. However, MPs said companies had an obligation to pay tax if they were making a profit. Their accounts show Rolls-Royce paid £218m in taxes abroad where it said it conducts 85% of its business. Director of campaign group Tax Research UK said: “Legality is not the question. The big question is, is it right, is it fair and have we got the proper tax system?” Chris Williamson, Derby North MP said successful companies in the UK are successful partly because of the investment that’s made in public services, in education, in infrastructure to enable them to flourish. And they should pay tax. So much for government boasts about how profitable the aerospace industry – combined with civil aviation – is for the UK. BAA, BA and EasyJet also pay little UK tax. See below. 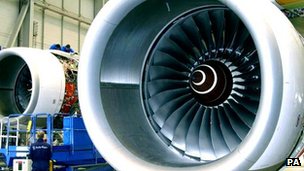 International engine builder Rolls-Royce did not pay any corporation tax in the UK in 2012, its annual report has revealed.

The firm, which employs 12,000 people in Derby, reported a record year for profits but paid nothing to the treasury and received £3m in credit.

It said most of its sales were abroad and its tax liability was reduced because of its investment in research.

MPs said companies had an obligation to pay tax if they were making a profit.

But for the second year in a row its tax bill in the UK remained at zero, with the company receiving £3m in credit.

The firm refused to be interviewed but told the BBC most of its sales were abroad and its tax bill reflected this.

According to its records, last year Rolls-Royce paid £218m in taxes abroad where it said it conducts 85% of its business.

And it said its tax liability was reduced because of the millions it spends on research and development.

Chris Williamson, Labour MP for Derby North, said he had written to the chief executive of Rolls-Royce for more information.

He said: “We do need to get to the bottom of the story. All companies, irrespective of how many people they employ, have an obligation to pay tax if they are making profits here.

“We have to remember that successful companies in the UK are successful partly because of the investment that’s made in public services, in education, in infrastructure to enable them to flourish.”

Labour John Mann MP, who campaigns on tax issues, said: “There is no reason for Rolls-Royce, or any other company, not to be paying their fair share.

“That’s where the HMRC needs to use the powers it’s got properly, but also if it thinks it needs more powers and changes in the law [it needs] to come forward.”

Economist Richard Murphy, director of campaign group Tax Research UK, said it did not appear to be fair that a profitable company was not paying any UK tax.

He said: “Legality is not the question. The big question is, is it right, is it fair and we have got the proper tax system?”

A spokesman for HMRC said: “HMRC ensures that multinationals pay the tax due in accordance with UK tax law.

“We have been very successful in reducing tax avoidance by large businesses in recent years.

“We relentlessly challenge those that persist in avoiding tax and have recovered £29bn additional revenues from large businesses in the last six years, including £4.1bn in the last four years from transfer pricing enquiries alone.

“These figures speak for themselves.”

Statement to Parliament by Mark Prisk (Minister at the DCLG)

Aerospace firm Rolls-Royce has announced plans to shed nearly 400 jobs at one of its plants – but is blaming it on the government, a union has claimed.

The firm is consulting on shedding the jobs at the Ansty site near Coventry in the Midlands, according to trade union Unite.

The announcement puts 378 jobs at risk, the union says, adding that staff were informed of the company’s plans in an internal memo.

The Rolls Royce site plans to axe nearly 400 jobs, it told staff in an internal memo
Unite has further claimed Rolls-Royce is proposing to shut the plant in the next few years but has put the blame for the company’s decision on the Government for what it called ‘short-sighted’ cuts to the national defence budget.

Ian Waddell, Unite’s national officer for aerospace and shipbuilding, said the company had sent an internal memo to staff detailing its proposals.

He said: ‘The blame for the loss of these highly skilled jobs in the key defence sector lies with the Government and its short-sighted determination to ram through massive spending cuts in the defence budget.

‘Once again, Unite calls for a coherent defence industrial strategy to be drawn up as matter of urgency to safeguard jobs and a defence industry at which Britain excels. ‘This is vital – otherwise more high-skilled jobs will be lost, perhaps forever. ‘There is a very long timescale for consultation and implementation, so we hope that compulsory redundancies will be avoided. However, the underlying reason for the job losses is the Government’s defence spending cuts announced a couple of years ago.

‘The scrapping of the Harrier jumpjet fleet, for instance, has led to redundancies at the Ansty factory, which will close.

‘Meanwhile, work from Germany will be transferred to Rolls-Royce’s site at Bristol.
‘Unite will be seeking an early meeting with management to discuss the implications for our members and we will taking every step to safeguard their employment now and in the future.’

He said bosses at Rolls-Royce had acted ‘fairly’ by giving as much notice as possible to the staff of the company’s plans to shut down the plant.

The 200-acre Rolls-Royce site at Ansty employs about 800 people and handles the refit and repair of both aeroplane and marine engines.

Components for the company’s Trent series of civil aviation engines are also manufactured on the site.

A Rolls-Royce spokesman said: ‘We are in consultation with trade unions over reductions in our defence workforce at Ansty.

‘We hope to achieve this without compulsory redundancies.

‘Ansty also conducts civil aerospace business which is not affected. ‘In a large and complex company there is a continuing need to align resource and customer demand. Overall group employment at Rolls-Royce remains fairly constant.’

BAA also does not pay tax:

BAA’s passenger numbers have recovered since the low point of the credit crunch, but its balance sheet is still in the red.  BAA’s group net debt rose by 3.6% from £10.4bn in 2010 to £10.8bn in 2011. Their first quarter pre-tax loss was £231.4m. The business owes more than £10bn, and so has a large annual interest bill (it paid out £388m last year), and spends £1bn annually on improving its airports. BAA has not made a quarterly profit since it was acquired in 2006.  It has not paid corporation tax in years, has borrowed even more to pay investors who leveraged up to the hilt when they bought the business in the first place. Does paying a sizeable dividend appear wise when you owe £10bn and you haven’t made a profit in years?

Tax on profit on ordinary activities

Tax charge/(credit) in the income statement

and there is more detail at

EasyJet also does not pay tax:

The effective tax rate is lower than the standard rate of corporation tax in the United Kingdom principally due to the impact on deferred tax balances of the reduction in corporation tax rate announced in the 2012 UK Budget.

and more detail at