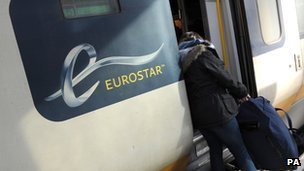 Promotional campaigns helped Eurostar to maintain revenues during the first three months of this year.

The high speed rail service between the UK and mainland Europe reported a 1% rise in revenues, up to £213m from £211m in the same period last year.

Business travel struggled due to lingering economic uncertainty throughout Europe, the company said.

But promotions such as one offering 150,000 seats from £59 meant leisure bookings soared.

During the 13-day period in which the promotion ran, bookings exceeded the record set during the ash cloud disruption in 2010.

The weather this year posed a significant challenge to the company. Eurostar services were suspended in March after severe snowstorms across north-western Europe.

“This is an encouraging start to the year in spite of the challenges posed by both the economy and the weather,” said Nicolas Petrovic, chief executive of Eurostar.

“Our sales revenues have grown during a quarter which saw heavy snowfalls and some of the coldest temperatures on record in the south of England and northern France”.

Eurostar delivers a strong performance in 2012

Eurostar, the high-speed passenger rail service between the UK and mainland Europe, today reported a strong performance in 2012 marked by rising passenger numbers and good growth in profitability.

Despite the difficult economic backdrop, passenger numbers for the year ended 31 December 2012 rose 2% from 9.7 million to 9.9 million. Whilst business travel remained flat, the uplift in passengers was underpinned by continuing resilience in the leisure travel market as the number of leisure passengers grew by 3% compared to the previous year.

The number of international travellers originating outside the EU has shown particularly strong growth during 2012, with volumes up 8% year-on-year. Responding to the difficult European economic environment, Eurostar has invested heavily in its international marketing capitalising on London’s year in the spotlight with the Jubilee celebrations and a summer of sporting action.

Nicolas Petrovic, Chief Executive, Eurostar, said:
“Despite the challenging economic climate we delivered a strong performance in 2012. The combination of the Olympic Games and the Jubilee gave London a major boost showcasing the city as a prime travel destination. Growth in traveller numbers was particularly strong in the fourth quarter of the year as European and international travellers flocked to the capital.”

In 2011 Eurostar delivered its first profit in its first full year of operation as a standalone company. Continuing this momentum, the business today reports an operating profit of £52.3 million in 2012, up from £25.0 million in 2011. This growth in profitability is driven by an increase in the volume of passengers combined with strong cost management across the business*.

The £700 million investment in creating a new fleet of trains remains on track with the production of Eurostar’s new e320 trainsets and the refurbishment of its existing fleet progressing well. Both the refurbished and new train sets are being delivered to a design created by Pininfarina, the world-famous Italian design house and the business looks forward to presenting its customers with a completely new fleet by 2015.

2013 also marks the launch of new services. Ski enthusiasts will benefit this year from a new partnership with international high-speed train operator TGV Lyria offering a weekly service between London and some of Switzerland’s most popular ski resorts, while later this summer, new direct services to Lyon and Provence will launch for a trial period.

Nicolas Petrovic continues:
“The next couple of years will see the transformation of our business with a range of initiatives including the delivery of a new fleet and the launch of new services. Today’s results are testament to the substantial growth opportunities within the business and the continuing drive to unlock this potential.”

* The net profit for 2012 was £91.0 million compared with £20.8 million in 2011, principally reflecting the increase in operating profit referred to above as well as a non-trading item in the year.

British Airways would like to work with Eurostar to combine flight and rail services on the same ticket.

BA’s commercial director Drew Crawley said the carrier had been looking at “opportunities to work with trains”.

“We would like to interline with Eurostar to offer a Paris-London sector on the train,” said Crawley at the ITM conference in Windsor.

“We would like to be able to price them, but so far trying to do this has been a big struggle – even though Eurostar wants to do it.  Technology is the critical issue.

“We would see it as an opportunity to offer better services to our customers. If you were working in London near to St Pancras, you could take the train to Paris and then fly back with us if you lived in west London.”

Eurostar currently accounts for 70 per cent of the market between London and Paris, although BA still operates 11 daily services on the route.

Lufthansa’s UK  general manager Christian Schindler said that there were many technical issues in combining flights and trains within the same journey including different levels of security.

“Railway systems do not have the same security measures in place – there’s no check-in, you just board the train,” he said.

“There are lots of ways of travelling and processes which are different and do not match up.”